In light of Sonora Governor Claudia Pavlovich’s announcement yesterday to install filters in municipalities along the Sonora border with the US this weekend, in an effort to limit “non-essential” travel into the state and with that possible spread of Covid-19, the Puerto Peñasco Chamber of Commerce and Tourism Services (CANACO) has joined efforts with the local Convention and Visitors Bureau (OCV) to highlight the very essential need for tourism to the area.

The campaign, entitled “Let’s Save Puerto Peñasco’s Tourism” or #SalvemosElVerano (#SaveSummer), calls for there to be no border closures, arguing this would be a mortal blow to the tourism and business industries of Puerto Peñasco, calling them essential activities to sustain thousands of families. 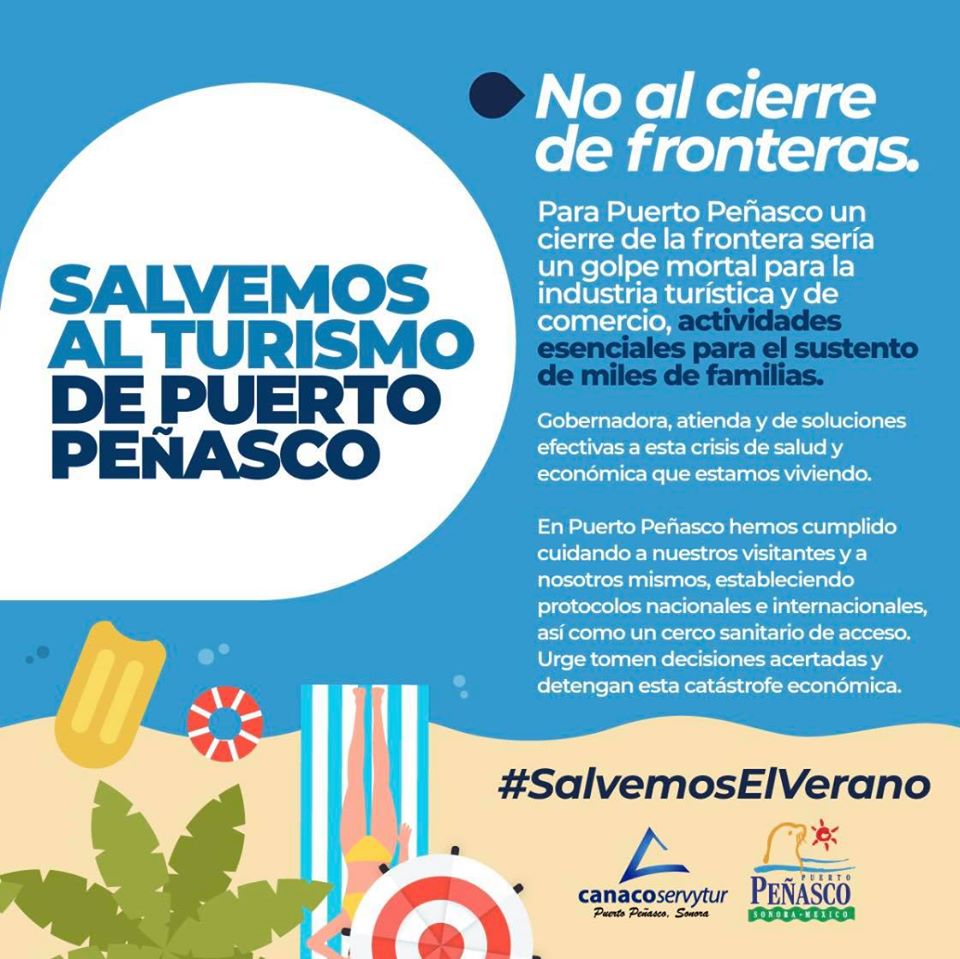 The #SalvemosElVerano campaign extends a plea to Governor Pavlovich to address and provide effective solutions to the current health and economic crisis we are all facing.

The request states “In Puerto Peñasco we have complied, caring for our visitors and for ourselves, establishing national and international protocols, as well as a health filter to enter.  It is urgent to make suitable decisions and stop this economic catastrophe.”

Puerto Peñasco CANACO-Servytur President Angel de la Puerta emphasized the goal of this strategy is to “Raise awareness and ask for support from the Governor and the State Health Board, as Puerto Peñasco has complied with national and international protocols, having had a positive response in the city with the least amount of coronavirus spread in the state. Closing the faucet to the tourism and business economy in Puerto Peñasco is a poor decision.”

In some of the most aggressive strategies in Sonora, Puerto Peñasco shut down nearly completely for over three months, just recently opening up to visitors again despite beaches being closed and several health protocols still in place, including obligatory use of masks in public areas and a nightly curfew.  Yet, eager visitors have been trickling back, well aware of the careful steps the city has taken for reentry to town.

On July 1st, the city began welcoming back residents (with proof of residency) under an agreement to self-quarantine for 14 days. This comes after the city first welcomed tourists on June 16th, though only with prior reservations at health Certified hotels and resorts.

There is speculation the temporary measure may only be focused on the U.S. holiday weekend, though Puerto Peñasco business leaders, restaurants, hotels & resorts, the general population, and of course the local press remain alert to the rapidly changing details.