In a simply historic moment for Puerto Peñasco, the ARM Cuauhtémoc (BE01) flagship of the Mexican Navy anchored in this corner of the Sea of Cortez for the first time on the afternoon of Friday, May 21st.  This visit was the 8th of 26 stops at a Mexican port on the ship’s 2021 “Mexican Navy Bicentennial” Instructional voyage, having departed Acapulco on April 5th earlier this year. 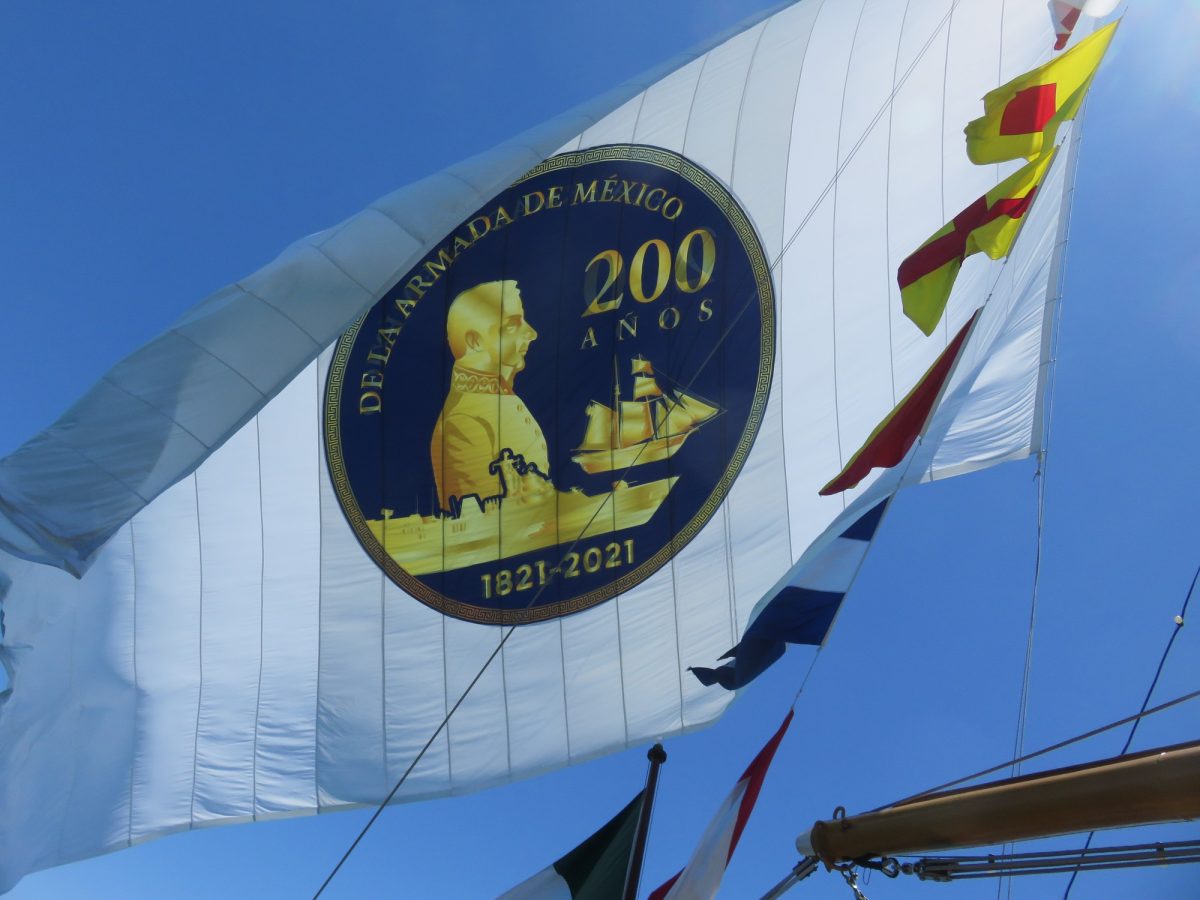 The ARM Cuauhtémoc (BE01), built between 1981-1982 at the Astilleros y Talleres de Celaya in Spain, first flew the Mexican flag upon delivery on July 29, 1982. The ship’s name is in honor of Mexico’s last Aztec emperor, whose figure adorns the vessel’s bow and bust of whom is displayed in the Captain’s Quarters.

Under the motto Por la exaltación el Espíritu Marinero (more on that translation later), for nearly 40 years the ARM Cuauhtémoc (BE01) has sailed the world’s oceans and seas, training more than 38 generations of captains, officials, cadets and sailors in the firmest sailing traditions. It has participated in frigate and tall-ship races and presentations across the globe, having docked at over 215 ports in 62 countries on 5 continents, for a total of 6,042 days at sea and 778,252 logged nautical miles.  The 2021 “Mexican Navy Bicentennial” voyage will last 195 days, including 141 days at sea and 54 in national ports. 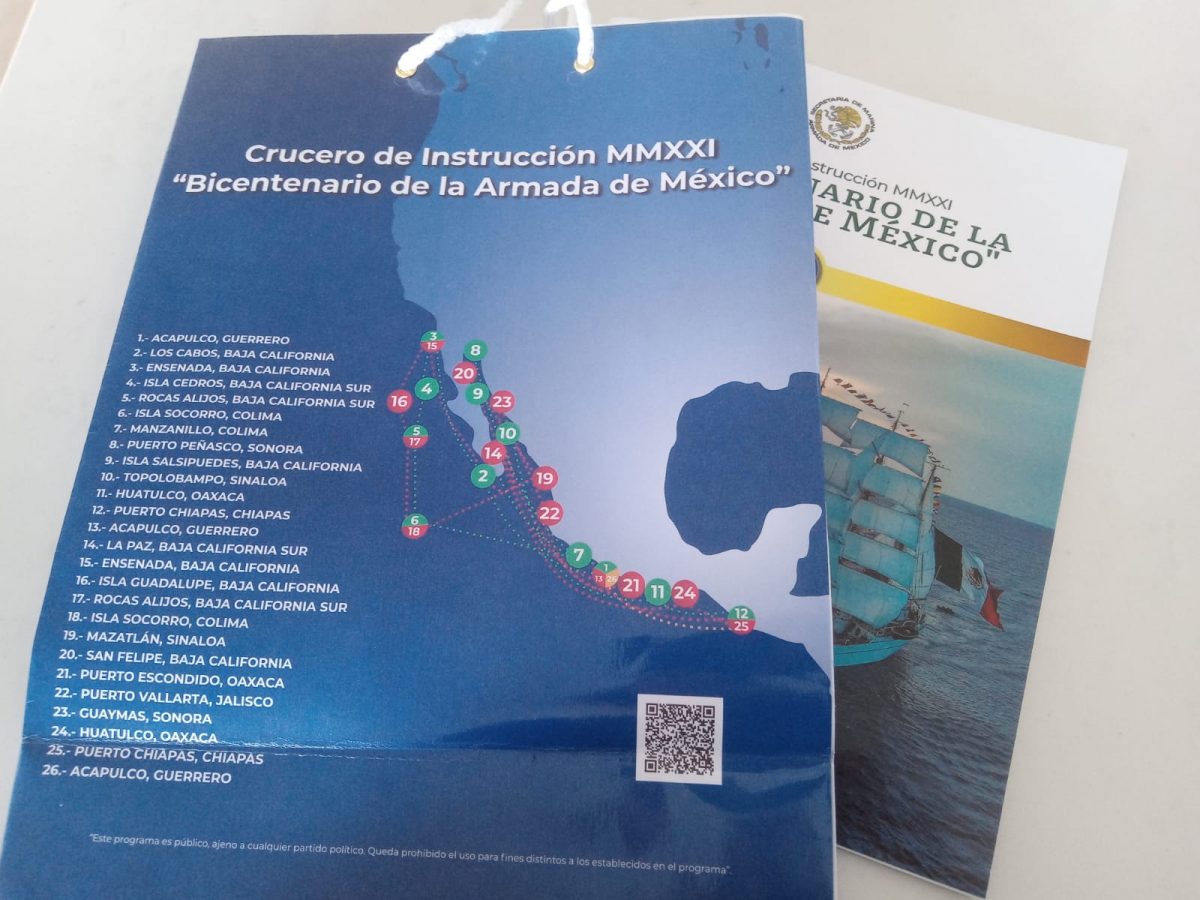 Through coordination of the Puerto Peñasco City administration, local Convention and Visitors Bureau, many area businesses, and the Navy, on May 22nd several of the male and female cadets of the Military Naval School and Merchant Marine students currently studying aboard the Cuauhtémoc had the opportunity to spend a day in our port at area hotels and resorts. In turn, many Puerto Peñasco dignitaries, business leaders, tourists, and residents alike eagerly seized the chance to visit the ship throughout the day prior to its departure just before sunset that evening.

It is important to clarify tours upon the ship, provided by Cuauhtémoc personnel were free. As the ship had to anchor off shore, given that Puerto Peñasco does not currently have a dock to accommodate such a vessel, a private boat company charged a modicum fee to provide transportation to the ship. 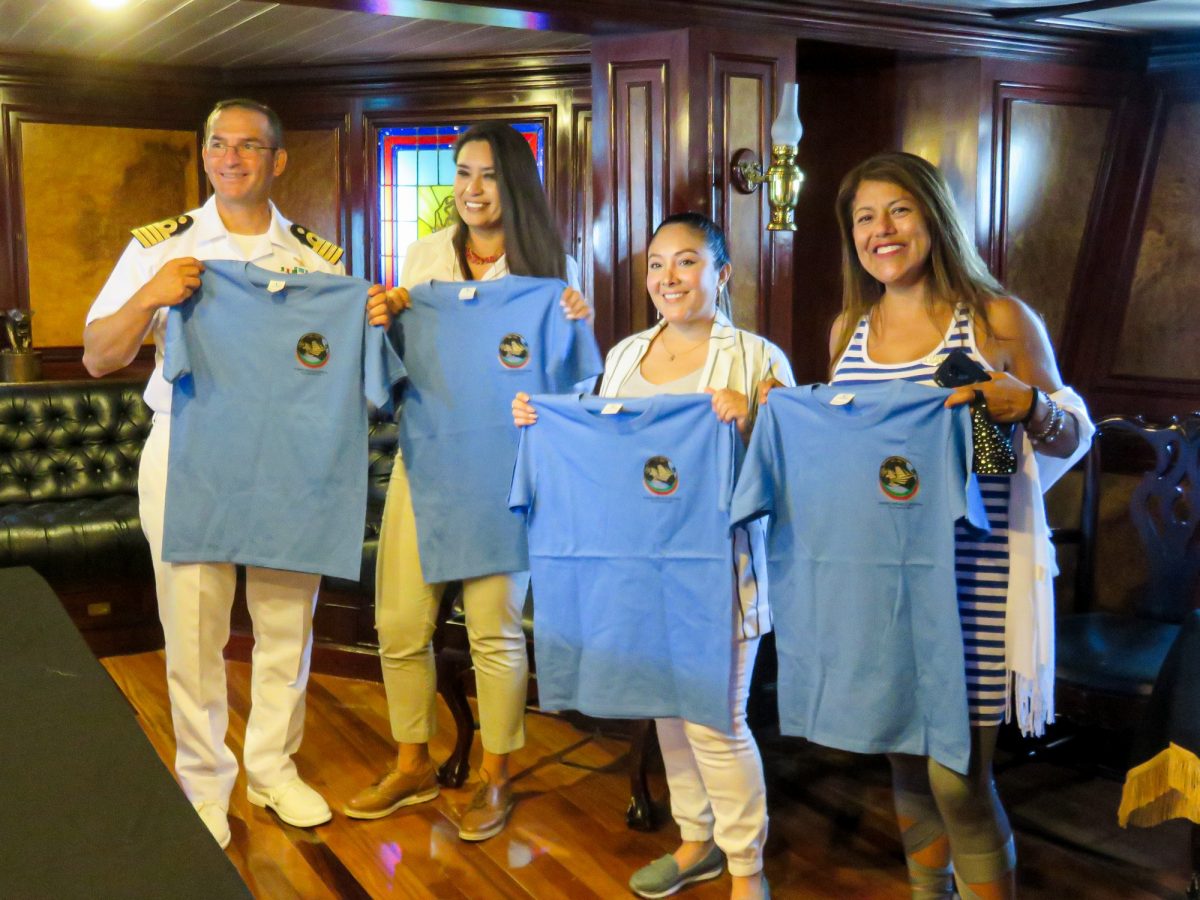 As soon as I stepped off the Navy speed boat that had ferried our small group from the naval base to the majestic Cuauhtémoc anchored just off the shores of Puerto Peñaso, I knew I was in a noble presence. 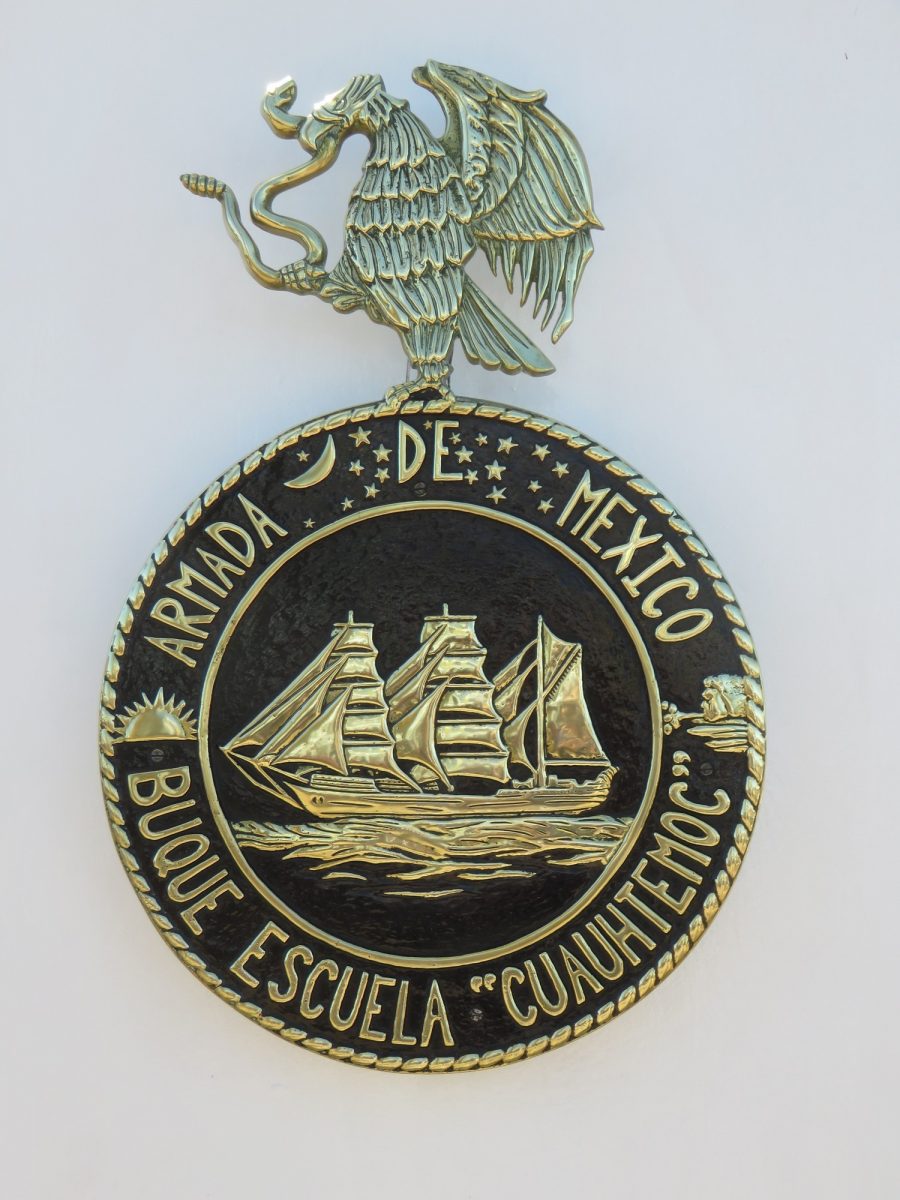 Once aboard the Cuauhtémoc, I had the opportunity to speak with ship Captain Mexican Naval Commander Carlos Gorraez Meraz at a special luncheon held on the upper stern deck. Commander Gorraez Meraz, himself a graduate of the Military Naval School, is a decorated official as well as a translator of both English and German. Our conversation quickly turned to translation.

The Cuauhtémoc flagship of the Mexican Navy is also known as the Embajador y Caballero de los Mares, or rather the “Ambassador and Knight of the Seas” (according to the translation of its 2019 Northern Europe Instruction Voyage)

In English, however, the term caballero may be translated as either “gentleman” or “knight”, which led me to ask Captain Gorraez Meraz, an experienced translator, which he preferred.  Following much contemplation, and at times leaning toward knight but opting instead for gentleman, Captain Gorraez Meraz explained how the ship itself, “as an ambassador for Mexico across the globe is meant to foster friendship and goodwill, which is more conducive through the lens of a gentleman, rather than the possibly more harsh connotation of knight,”  The 2021 Bicentennial Instructional Voyage magazine further highlights, “the Embajador y Caballero de los Mares is a source of pride by which our Nation transmits the message of friendship and goodwill in ports and seas worldwide.” 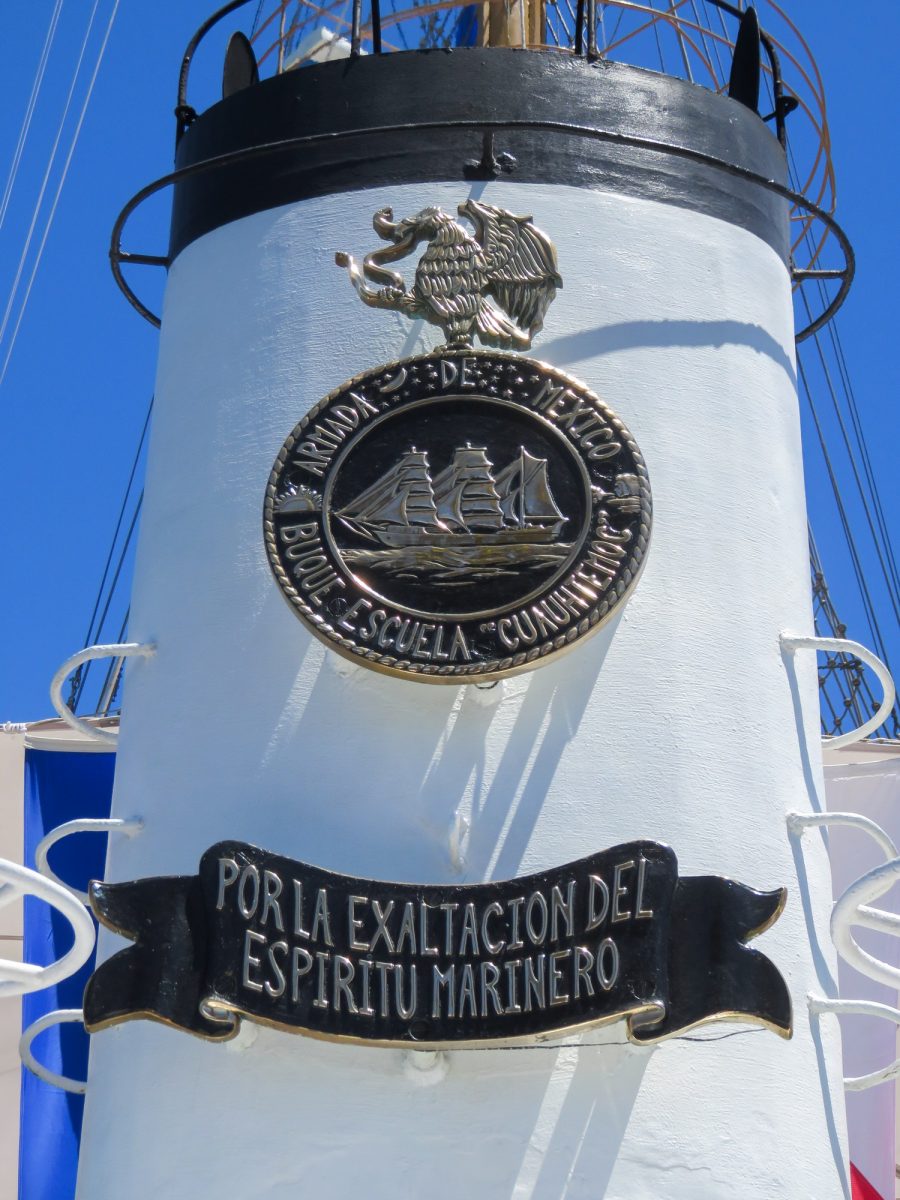 Captain Gorraez Meraz then turned our translator attention to what has been the mission of the ARM Cuauhtémoc (BE01) since its genesis, or rather “¡Por la Exaltación del Espíritu Marinero!” He indicated this translation has also been a point of discussion, emphasizing the very essence of the sailor’s spirit. Yes, he does mean the actual spirit of each and every sailor that is developed aboard the Cuauhtémoc.

The 2019 Northern Europe Instructional Voyage magazine of the legendary Mexican flagship translates the ship’s motto both as “Pro Exaltation of the Sailor Spirit” and “Pro the Exaltation of the Sailing Spirit”. Yet, in exploring the phrase further with Captain Gorraez Meraz, and sensing the absolute pride of commanding this ship that has trained and developed top Navy personnel for nearly 40 years, the crux of the phrase when translated to English is aching for further depth. The ship’s captain agrees, hence the ongoing point of debate.

Exaltar: to exalt, to praise, extol, aggrandize   Exaltación: exaltation, glorification, praise. For now, I translate the mission of the ARM Cuauhtémoc (BE01) as “Exalting the Sailor’s Spirit”, though its mission might truly be to develop the spirit of a sailor, a Navy sailor.

As Captain Gorraez Meraz handed me a visitor’s gift-bag with the Cuauhtémoc’s 2021 Bicentennial Instructional Voyage magazine inside, he bade farewell as he was called away to continue the afternoon warmly conversing with Puerto Peñasco dignitaries.  Quite the gentleman, and himself a goodwill ambassador. 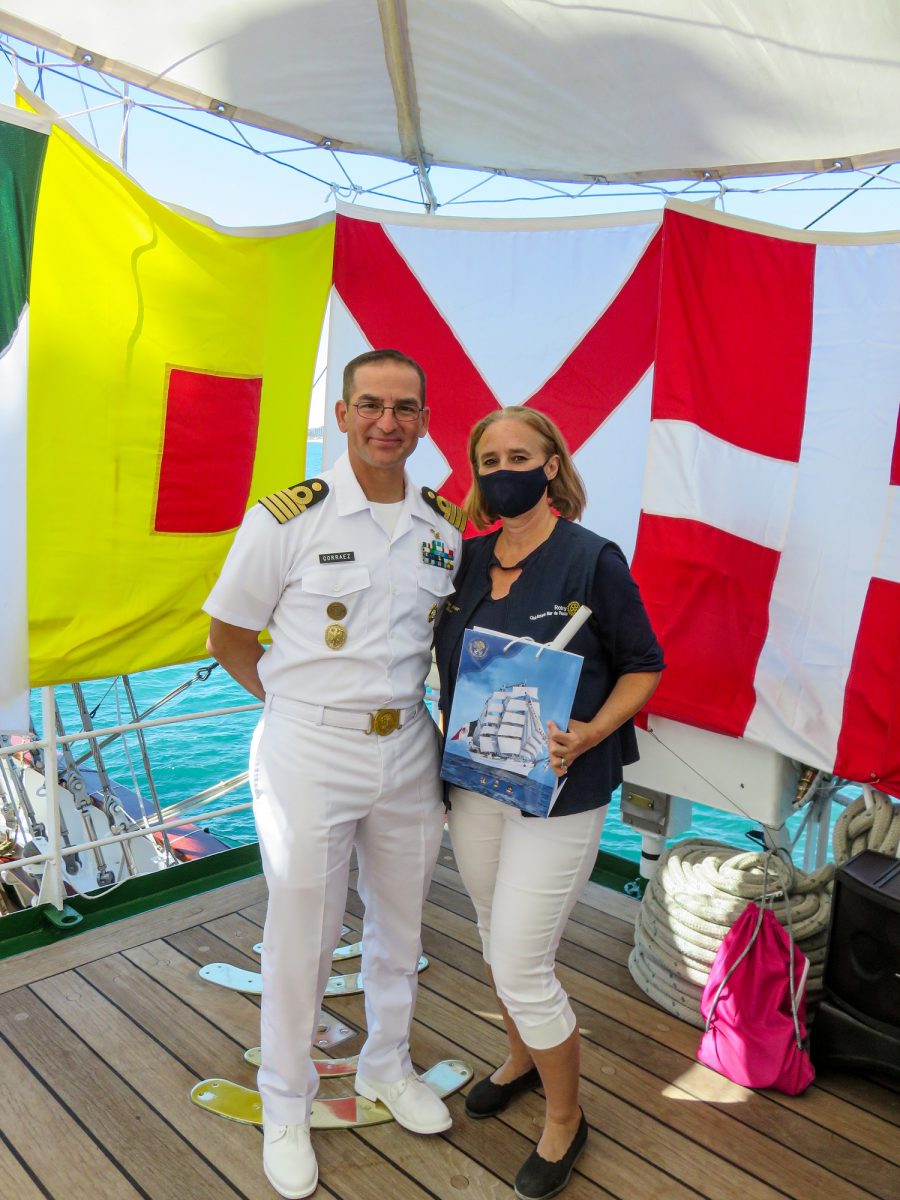 The mission of the ARM Cuauhtémoc (BE01) is within its motto: “Por la Exaltación del Espíritu del Marinero”, which is instilled in future Mexican Navy Officers, with the pledge of bestowing themselves in offering all their might to make the vessel a worthy and humble cradle to continue strengthening the minds and spirits of those who embark within its bosom, pursuing the goal of training to better serve their Homeland.

In addition to its mission, this Embajador y Caballero de los Mares is a representative of Mexican nationality and carries with it a message of peace and goodwill, as well as proudly raising the Mexican flag throughout seas and ports worldwide.