Over the recent 4th of July weekend, many eager Encántame owners had the opportunity to get a taste of what it will be like to call the towers soaring over Playa Encanto home. Or rather, even more so than get a taste, they were able to test the waters in the spectacular pool in front of the first of three buildings that will grace the complex, and shimmy up to the aqua bar overlooking the spectacular Sea of Cortez and the unparalleled beaches just east of Rocky Point.

The day before, on a curiously overcast day, I found myself chauffeured to the site by sales director Keith Allen while he excitedly talked about the astounding project readying to deliver its initial condos.  Second through fourth floor condos in the impressive Velero (meaning sailboat) building are slated for delivery first, while a 3rd groundbreaking – this time for Viento (Wind) to the east is planned for later this year.

The 15-minute jaunt to the Encántame Towers site from Puerto Peñasco skirts by “adopt-a-highway” signs sponsored by the development itself. In fact, this is the first and only stretch of highway in the area to be “adopted” in an effort to give back to the area by improving the overall look and feel of driving south from Puerto Peñasco. 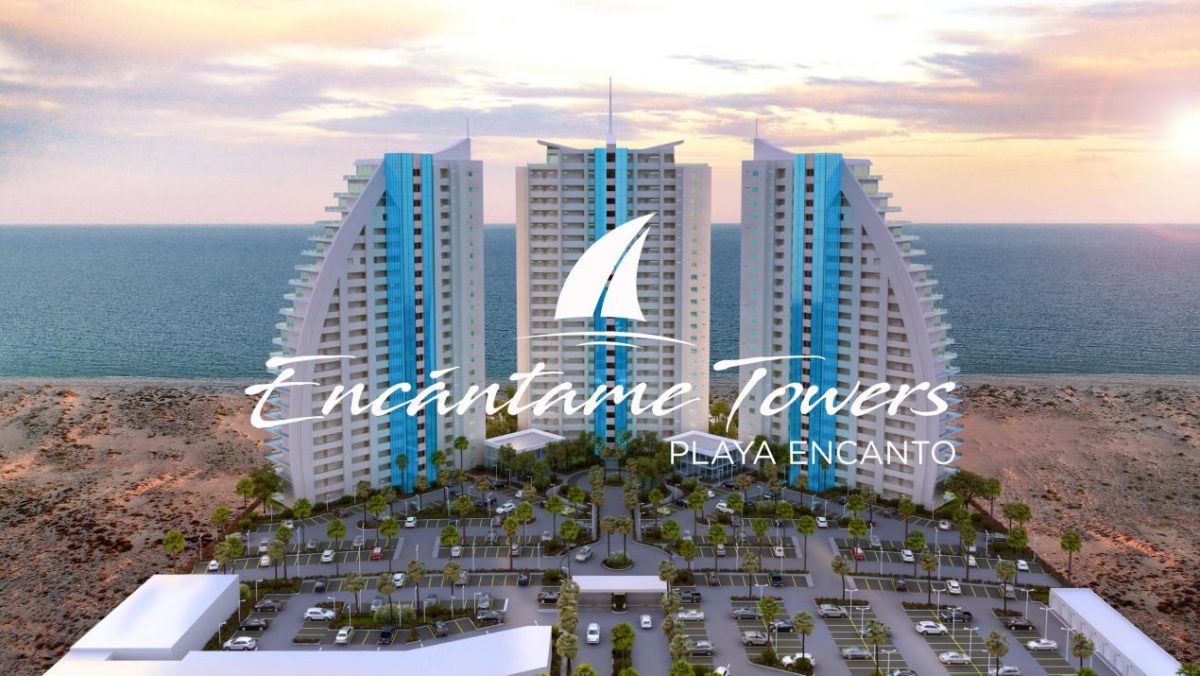 “When people drive to Encántame from the U.S.,” added Allen, “it will be a simple turn from the overpass off the Sonoyta-Puerto Peñasco highway, which will effortlessly guide them to the resort’s owned paved road leading up to the towers.  Once at Encántame, the goal is to also provide shuttle services so people can easily visit popular parts of Puerto Peñasco, in addition to of course this being a destination spot itself.”

After parking near the onsite offices, Keith handed me an Encántame hard hat for the walking part of our tour through what is already the tallest building in Sonora, at 25 stories! We perused the construction site of the first of two club houses at the entrance to the towers. At 8000 sq. feet, this clubhouse will soon be home to a Wellness Center featuring a second level ocean view gym, yoga area and massage rooms, while a business center, lobby and customer service space, and a Starbucks/Blue Palm café will nestle into the main level. 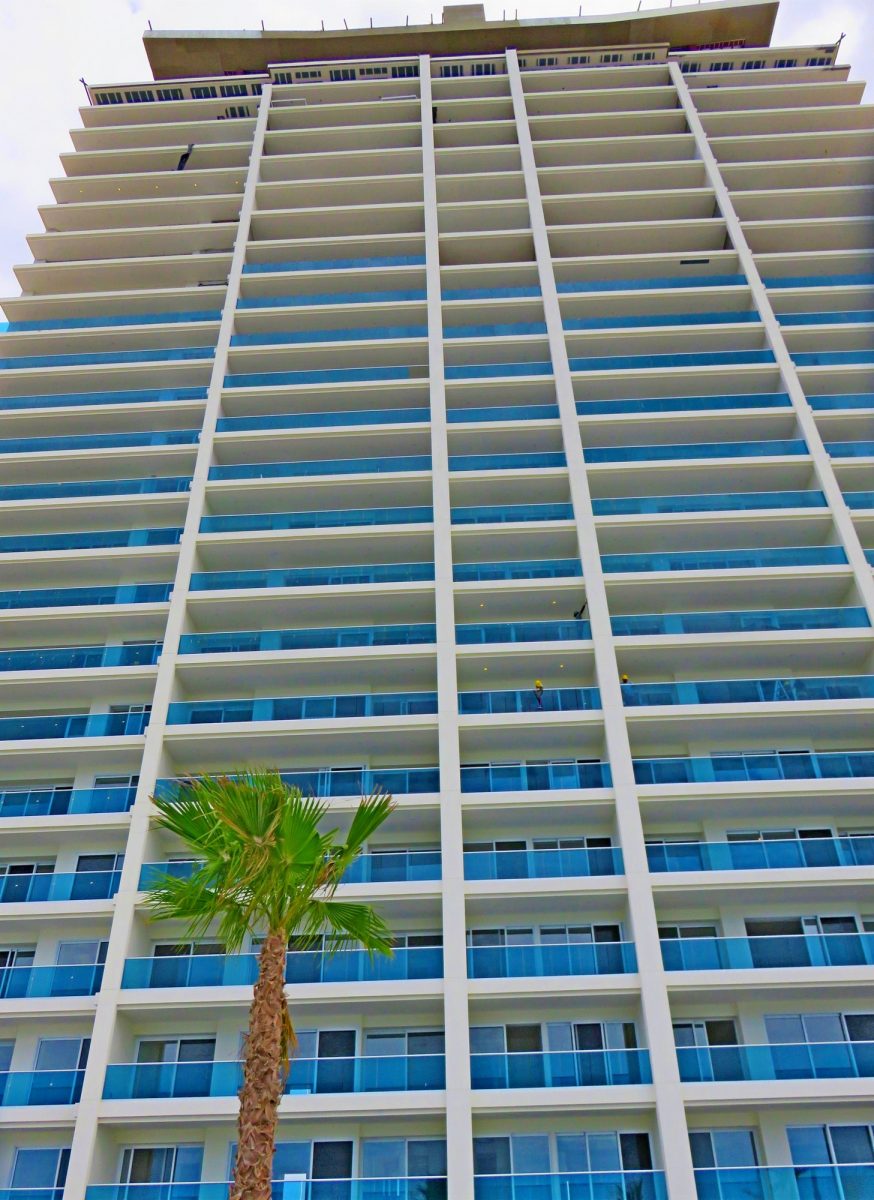 Keith graciously guided me through the 1, 2, 2 bedroom-deluxe, and 3 bedroom condominiums within the Velero building, many of which are merely awaiting final touches before ecstatic owners can move in. Towering just over its nearby companions, Velero offers 114 condominiums while Verano and Viento will house 100 each.

“One thing that Covid meant for us,” Keith reflected as we stepped into a spectacularly lit wrap-around corner of a two-bedroom deluxe, “was that some of the manufacturers we had already selected could not stay up with or meet the demand. So, for example, all of our kitchen appliances are now SMEG, which is of even more outstanding quality.”

He pushed the balcony doors with ease, each of them sliding along a track and disappearing seemingly into each other, lending the living and dining room area a whole new aura. From the balcony on the second floor, Keith surveyed the landscape as final preparations below us were underway around the pool area, aqua bar and terrace – readying for the next day’s pool party.  Pointing to the east plot next to the pool, already well under construction, he explained, “Guadalajara restaurateurs will be opening the Santo Coyote Ocean Cantina to that side, offering both open air and inside dining, not to mention the view.” 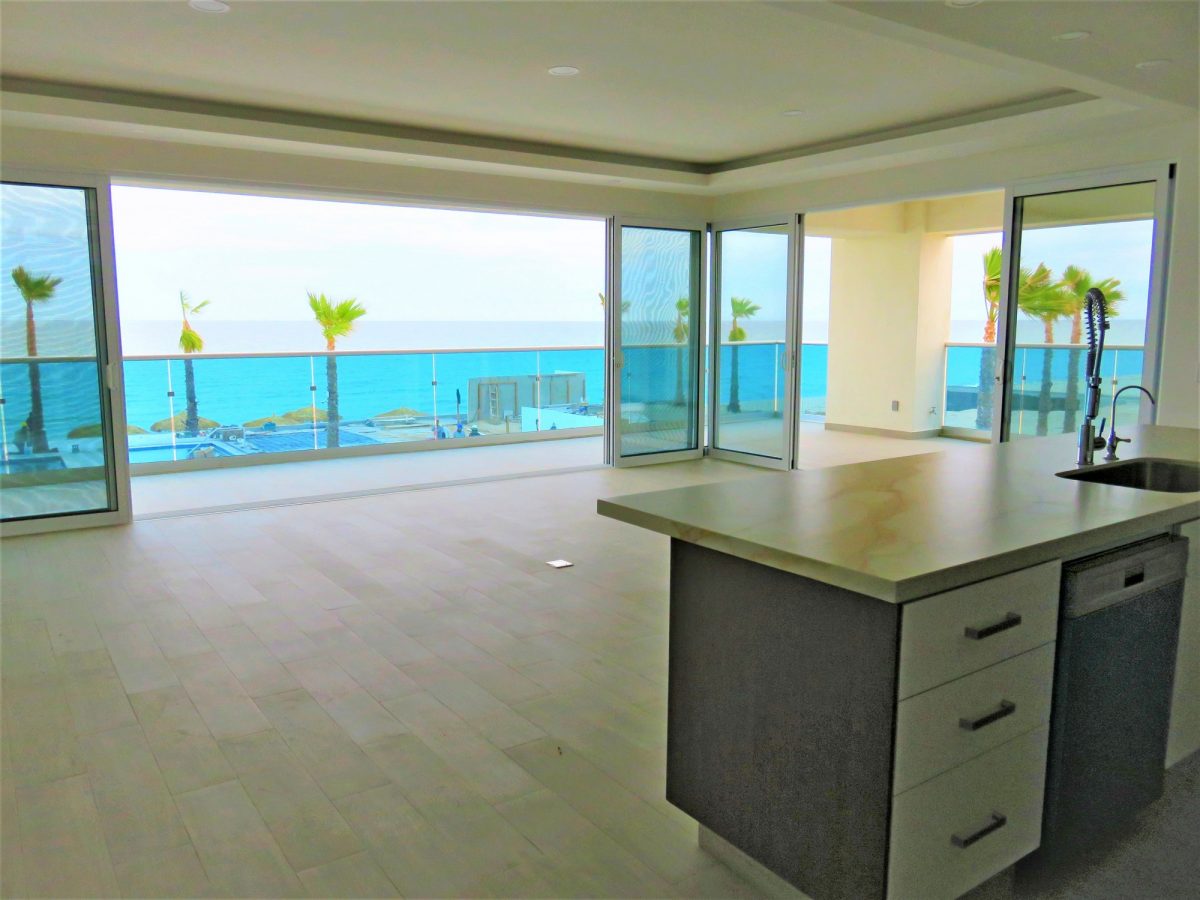 “Would you like to see the penthouse?” Allen excitedly announced.

As mentioned, the Velero building of the Encántame Towers project is literally the tallest building in the state of Sonora.  Once done, its counterparts Verano and Viento will be the second tallest buildings in the state. Needless to say, the view from the Velero penthouse offers a front row seat to the elegant fusion of desert and sea hugging the pristine shore far below. One can easily follow the nooks of coastline stretching to the west towards town, offering an impressive overview of Puerto Peñasco’s familiar figure along the horizon. Your eye continues over the desert to the majestic peaks of the Pinacate range with the sand dunes at its base. Completing the panorama to the east and south, Bird Island takes its place of honor in the distance as gleaming blue water stretches its reach beyond the imagination.  Yes, the top penthouse at Velero is still available, awaiting the right owner who will make it their own… right on top of the world.

Returning to the elevator for the ride back down, Keith once again shared, “With the Covid pandemic last year, we weren’t sure when we would be able to continue with construction at first, or how long it would last. However, we were able to hold a groundbreaking ceremony for our 2nd building last October, and we have seen the experience of Covid has spurred many more people to purchase a place at the beach, to invest here. It has really been non-stop.”

Stepping off on the 2nd floor, Keith pointed to sections under construction on other parts of the sprawling land, detailing, “There are garages around both sides of the parking area; that’s the entrance to the underground parking off our own paved entrance; the commercial area will be in that direction and will one day provide a bowling alley, restaurant; in that direction there will be a driving range; and in the future there is space for an event or convention center.”  Keith’s eyes darted about the land, envisioning what is to come.  Truly enchanting.

Encántame Towers is the 6th project for the development team of Miguel Guevara and Mary Snyder, who have both been in Penasco, full time, since 1995, seeing through to successful completion five prior resorts including Puerta Privada, Sonoran Spa, Sonoran Sea, Princesa de Peñasco, and Condominios El Pinacate!

For more information on Encántame Towers, visit their Model located at the roundabout on Sandy Beach, open daily 9 am – 5 pm or online at:   encantametowers.com