Juan Francisco “El Gallo” Estrada of Puerto Peñasco has done it! He is the new WBO and WBA Flyweight World Boxing Champion following a 12 round bout against Brian “Hawaiian Punch” Viloria at the Fists of Gold event held in Macao, China on April 6th!  Felicidades, campeon!  Below we present an interview RockyPoint 360’s MoKa Hammeken did with El Gallo in November of last year, just before he headed to LA to take on Roman “Chocalatito” Gonzalez.

Note by Fightnews.com:
Juan Francisco Estrada (23-2, 17 KOs) seized the WBA and WBO flyweight titles by taking a twelve round split decision against reigning champion Brian Viloria (32-4, 19 KOs) on Saturday night in the Cotai Arena at the luxurious Venetian Macao Resort in Macao, China. Scores were 116-111, 117-111 for Estrada and 115-113 for Viloria. 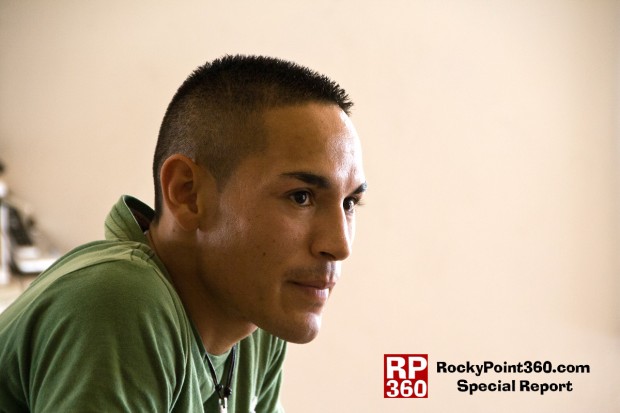 Before his upcoming fight this weekend against Román “Chocalatito” Gonzalez for the world championship light flyweight title, we had the opportunity to speak briefly with Juan Francisco “El Gallito” Estrada and his trainer Alfredo Caballero in Hermosillo.

We spoke with Alfredo while waiting for “El Gallo” who was dealing with arrangements and paperwork in preparation for his fight in Los Angeles, CA this coming Saturday, Nov. 17th, at the Sports Arena.

“Not many believed El Gallito could lose weight in order to get to light flyweight. Everyone’s saying the only problem is the weight, but honestly I’ve been working with Juan for 14 years (well, I’m the trainer for the Sonora selection) and he’s been flyweight since I’ve known him. Now, we’re almost there and he’s stronger and in better shape than ever; he’s faster and lighter, he has worked physically hard during all this time and all his muscles are well defined. He looked heavy when he fought in Peñasco [at the end of August this year],” he said as he showed us a photo on his cell taken during a recent training.

Incredible! In that photo you could see that Gallito was in excellent condition, with muscles so well-defined he could have been a model in some anatomy class at a medical school! “The exercise routines have been intense. There are times Juan has asked for sessions with a masseuse because he hurts down to his pinky-toe, but it’s worth it because we’re taking everything to this fight. We want the championship and El Chocolatito is not an easy rival. He is going to defend it and we are going to take it from him,; we are committed because Juan promised to take the championship to Puerto Peñasco, to his family and well, we’re not stepping down,” he continued optimistically. 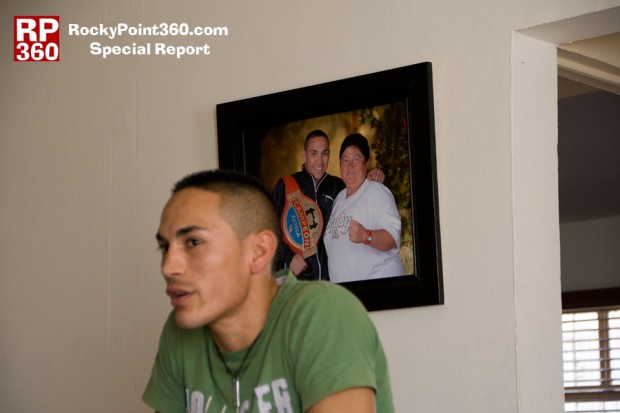 He impressed upon us they are not leaving anything to chance. If losing weight was essential, the fight itself is not being taken lightly. “We are working in conjunction with a nutritionist and a cook, as it is not just about stopping to eat this or that but rather to make sure it’s healthy, agile; it doesn’t serve us at all if he’s hungry and without energy. It has gone so well for us that now El Gallito is pure strength.”

At that moment our stellar boxer came in the door, happy, apparently all the paperwork went without a hitch. He greeted us with a smile from ear to ear and with a handshake I thought would fuse my fingers together.

He began by saying he was very happy for this opportunity, though some of the “beatings” his trainer has given him during training have made him want to “head for the corner,” but he’s withstood as he is more determined to box as is his desire for the championship. “This requires a lot of work and concentration, there’s nothing more than having the goal set, ‘cause I’m not just going to lose weight for the heck of it,” he laughed. “The most difficult part is already over, and I’m seeing the results; I feel stronger than ever and now we are working on speed. I’ve only got the final two kilos to drop.”

Though he says the most difficult part is over, El Gallito continues training three times a day to be in top condition. “I get up early, around 5 – 5:30 a.m. to go to the field and run and then to the gym to work with the punching bag. Then I come back, bathe, have breakfast and do stuff around the house or something here. Then I eat at 2 p.m., head to the gym again where I work with my trainer, back to eat once more and at 6 p.m. I go back to train, and then back for dinner. This is done more than anything during the last month before fights so I don’t lose strength or condition. When I win there will be time to celebrate with the entire family.”

In talking about dedicating life to this sport the obligatory question arises, “What was it that made Juan want to become a boxer?”  El Gallito Estrada tells us his brother inspired him to become a boxer since when he started Jr. High he wanted to take personal defense classes and began boxing, two weeks later Gallito also signed up. 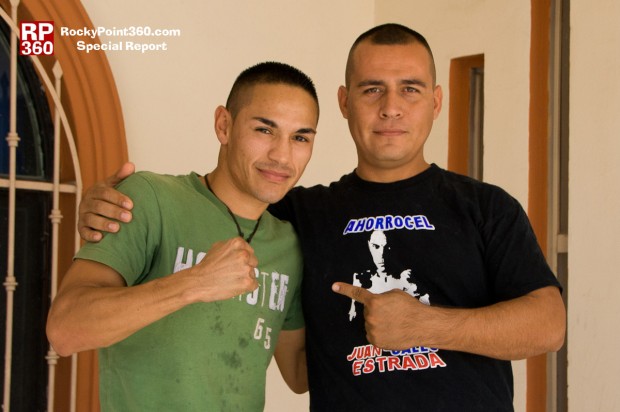 “There in Peñasco, he was going into the first level of Jr. High and I was in sixth grade (elementary), we were training and training and got good and entered neighborhood tournaments until we reached state fights, that’s when Alfredo Caballero, the trainer of the Sonora selection, discovered us and called us for CODESON and we moved here to Hermosillo for something more serious.”

So Gallito left it clear he is not one to throw in the towel and now his strongest motivation is to win this championship, hold onto it and keep it, as it’s not just for him but for his whole family and his entire team. “Each and every one of them has been important to get where I am now and where I’ll be afterwards, from the cook to the sparring partners. Everyone is included.”

Why do they call you El Gallito?  “Well, for my fierceness, up in the ring!”

We thought the interview had ended when Alfredo asked us, “Do you want to see how good El Gallito is? Today we’re going to do sparring at the Multi-Use Center in Hermosillo (C.U.M.) with other boys from the CODESON.” We couldn’t turn down the invitation and the opportunity to take pictures of El Gallito while he was training.

We went to eat and at four headed for the appointment at the C.U.M. We looked for what is known as the “shell” (some stairs) and next to that an entrance that takes you down a tunnel and into the innards of the building. After a few footsteps in, we could sense the smell of physical work, of competition; at the end of the hallway, to the left there was a boxing area with two rings, some ropes that hung from the ceiling, various punching bags, bleachers, and some kids (both boys and girls) who were warming up, chatting, hitting the bags, jumping rope and every now and then they would go up two by two to the ring for a brief encounter.

Among these was El Gallito, doing warm up exercises and talking with Alfredo. When he was done, he wrapped his hands, put on his gloves and his mouth guard, and with no further ceremony entered the ring for his first sparring.

“Did you see that? I have seen some sparrings of “Chocalatito” and honestly they don’t compare to these. Even though “Chocalatito” is really good, truthfully Gallito’s sparrings have been much better. That’s why I say we have everything to win,” Alfredo Caballero commented during a brief break.

After the first opponent, three others went into the ring to spar with Juan while Caballero, who was also in the ring, would give instructions to one and then the other. The future boxing stars included Victor Olivo, Daniel Arvizu, Samuel Esquer and Ramón Meza.

The whole scene seemed to me to be a Sonoran version of Rocky or The Fighter, impregnated with sweat, physical exertion, grunts of devotion and discipline; punch after punch, jab after jab, there is no room for distraction. This is the moment to give it all for everything.