With application of nearly all of the allotted shots for the 18-39 age groups in Puerto Peñasco, last week’s one-shot Johnson & Johnson Covid vaccination campaign was deemed a success.  The four day campaign, held principally at the local Convention Center as well as with drive-up ability at the Naval Hospital, and other selected spots in town, managed to give out just over 20,000 shots.

Ricardo Ibarra of the National Comprehensive Health and Wellbeing Center detailed coordinated work in Puerto Peñasco from June 28th – July 1st included participation of over 200 people from the three levels of government and other institutions. He highlighted the work of the “Correcaminos” (Roadrunner) brigade of the Mexican Navy, which is taking part in the vaccination process across border municipalities.  He added the extensive campaign set up sites at the local Convention Center, Navy Hospital, the Mine south of town, Mayan Palace, Las Palomas, Peñasco del Sol, the Palabras de Esperanza Community Center, as well as the local Social Rehabilitation Center (CERESO).

While the recent J&J vaccination campaign was for those 18-39, as well as anyone older who had not yet received their vaccine, Ibarra expressed they are awaiting confirmation as to when the 2nd AstraZeneca dose will be available in Puerto Peñasco for those 40-49 who received their first shot between June 9-12.

Despite the recent vaccination campaigns, for a third week in a row, Puerto Peñasco is ranked at a medium Covid-19 risk (yellow) in Sonora. This is as a result of an increase in cases and community spread.

Sonora Secretary of Health Enrique Clausen Iberri reported on the updated “Sonora Anticipa” Map for July 5 – 11, 2021, high-risk Covid-19 ranking (orange) municipalities include Caborca, Hermosillo, Cajeme, Navojoa, Huatabampo, and Nogales.  Those at medium-risk (yellow) are San Luis Rio Colorado, Guaymas, Empalme, Agua Prieta, Cananea, and Puerto Peñasco.  He called on people across the state to continue following health protocols to once again stop the spread of Covid-19 in communities.  The recent vaccination programs are a step in the right direction. 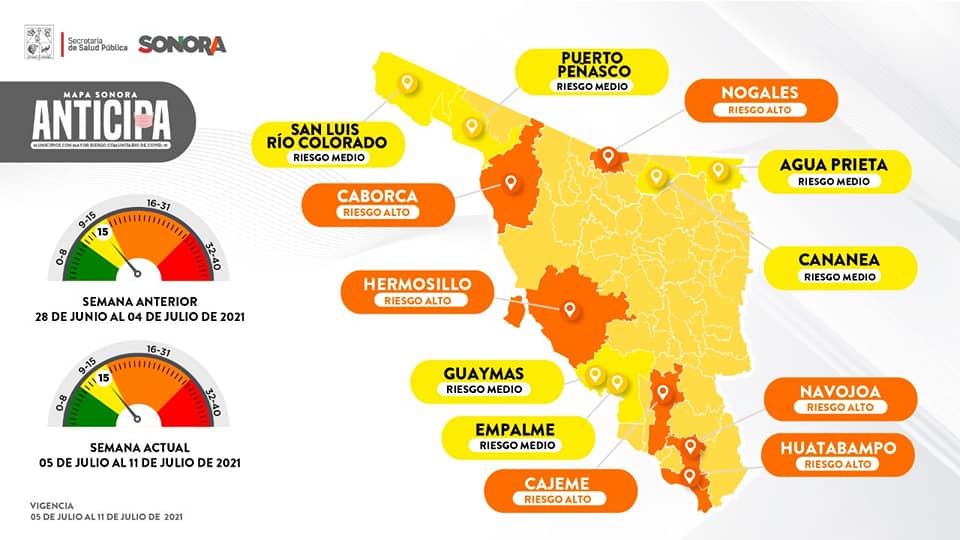 AMLO announces Specialized Hospital in Hermosillo and Attention for Seris