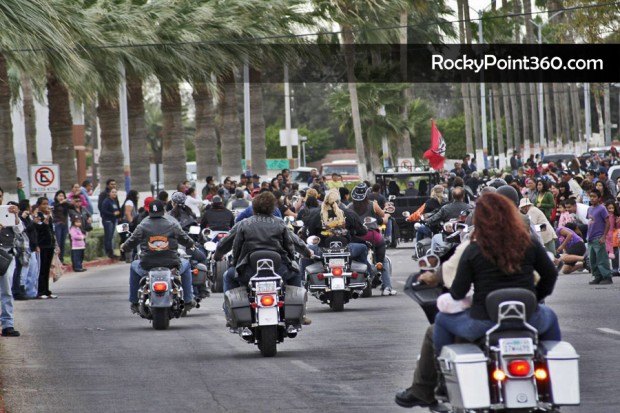 Each year one of the highlights of the Rocky Point Rally, particularly for the local community, is the rumble of bikes through town during the traditional Saturday afternoon Bike Parade!  This year, the parade will take off from Black Dog at NOON 12 p.m. on Saturday, Nov. 10th rather than the later afternoon start as in the past. Asked as to why the change in plans, organizers remarked “In recent years, we have found it is becoming more difficult to get people out of the Old Port once the party really gets going, so we decided to move the parade time in hopes that more people will participate.”  Plus, the parade will bring the party with it as its end point is precisely the Malecón in the Old Port!

Plan to hit any of Puerto Peñasco’s great breakfast spots, from the newly reopened Los Juanes breakfast buffet in the Mirador to Don Julio’s, Max’s, Rosy’s, Kaffee Haus, and everywhere in between…plus, Giuseppe’s is right next to where the parade will line up so that’s a good pick.  Line up around 11:30 a.m. – 11:45 a.m. in front of Black Dog  (about a block from the Red Cross), for the parade start at NOON.

Calle 13 up to Blvd. Juarez (stoplight)

Left at stoplight and then straight shot down to the Old Port…Malecón….FIESTA!!

Library on Wheels to be inaugurated Nov. 9th