More than 40 travel agents from various central and southern Mexican states recently toured magical and emblematic sites across Puerto Peñasco, and the surrounding desert, as part of POTENTUR 2022. Promoted by the Puerto Peñasco Convention and Visitors Bureau, in coordination with Hotel Peñasco del Sol, the goal of the event was to strengthen promotion of this vacation destination in potentially new tourism markets.

From May 4th – 6th, travel agency representatives from Guadalajara, Mexico State, Morelia, Oaxaca, Querétaro, Uruapan, San Luis Potosí, Tijuana, and Aguascalientes had the opportunity to visit some of the most iconic spots in this corner of the Sea of Cortez, try its gastronomy, as well as learn more about its beaches, hotel sector, and culture. They also took a boat cruise through the bay and toured the Sonoran desert so they could directly live the experience to then share with future tourists. 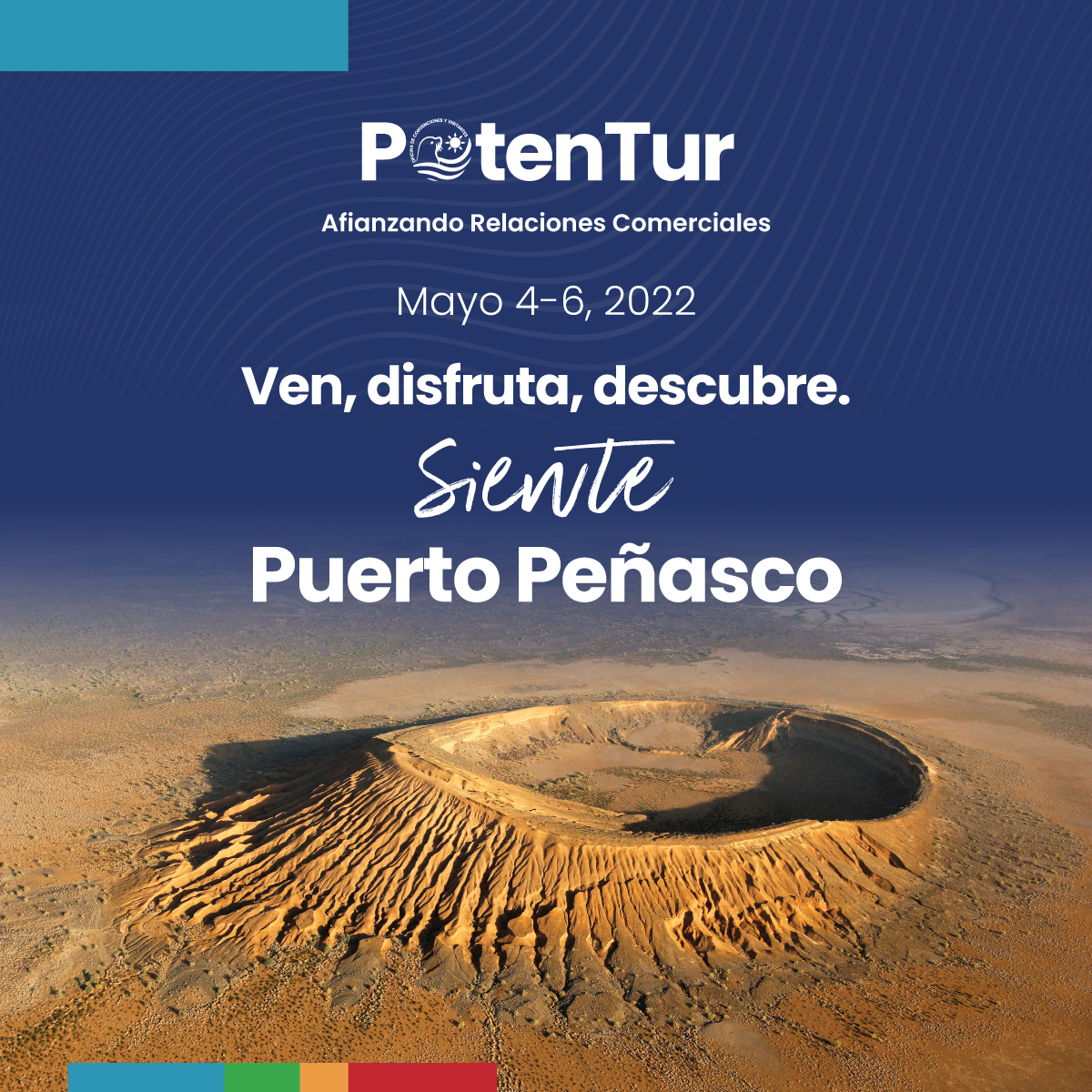 The tour began in Tijuana, Baja California, with travel agents making their way to Puerto Peñasco by land and a grand entry via the Pinacate Reserve.  At this first arrival point, travel promoters were able to stand at the edge of the enigmatic Elegante maar crater and walk along the pathways of this majestic ancestral site.

The travel agency representatives were then welcomed at host site Hotel Peñasco del Sol, where they took part in a “White Party” dinner as an icebreaker for the visitors.

A fundamental part of the tour was the trade show at the Peñasco Convention Center which featured local service providers, tour operators from Puerto Peñasco and Caborca, hotels, condo operators and rental agencies, as well as car rental agencies.  The trade show provided the opportunity for participants to exchange information with travel promoters, while also promoting their products at the restaurant and beverage pavilion with a variety of tastings and samples for the guests.

The agents, led by Amilcar Iván García, were met by members of the Tohono O’odham indigenous group at the productive networking session. The Tohono O’odham presented a demonstration of rituals to help harmonize the visitors’ welcome to this desert region.

Lizette Ibarra, Director of the Puerto Peñasco Convention & Visitors Bureau, expressed her thanks to the agents who had traveled from far distances to this tourism destination in order to learn more about the area and be able to promote it through their knowledge to bring in visitors.

“We need to strengthen tourism; we need to be prepared and reinforce the destination so that many people from the southern part of the country come to get to know us. That is the idea and goal of bringing together this group of travel agencies, so they can learn more about the northwestern corner of the country, Sonora, and the Sea of Cortez here in Puerto Peñasco.  The Potentur group included over 40 retail and wholesale agencies, excited in finally getting to see Puerto Peñasco. We’ve been in contact since the pandemic via zoom, and now having them here has become a reality,” detailed Ibarra.

To wrap up the Potentur event, the group took part in a dinner held at Islas del Mar where they were able to spend a relaxed evening along with the Caribbean sounds of Agua de Coco. At the event, guests shared their experiences about the places and activities they were able to enjoy and expressed gratitude for the care of hosts who participated in making this trip to the Sonoran beach destination a reality.

On May 7th, the promoters started the day with breakfast at Puesta del Sol restaurant at Playa Bonita before departure.

The travel promoters, who made progress with Puerto Peñasco businesses, returned to Tijuana on the recently inaugurated Calafia flight, where they would then be able to travel back easily to their points of origin. Through the entire experience, participants had the opportunity to travel by both land and air in measuring distance, time, and frequency of flights.