One of the many colorful traditions of the holiday season in Mexico is wrapped up in the cones and flowing tissue paper of piñatas. In addition to adorning children’s parties throughout the year, piñatas are customarily used during posadas leading up to Christmas Day. In brief, the posadas are a way to reenact the travels of Joseph and Mary in searching for an inn on Christmas Eve (posada actually translates to “inn”).

Piñatas have an elaborate history, some stories relating them back to Chinese figures of animals covered with colored paper used to ring in the New Year. Later stories say the name came from the Italian word “pignatta” meaning “fragile pot,” which is also illustrative of the Spanish Dance of the Piñata where a clay container was incorporated into Lent ceremonies (mexconnect.com). 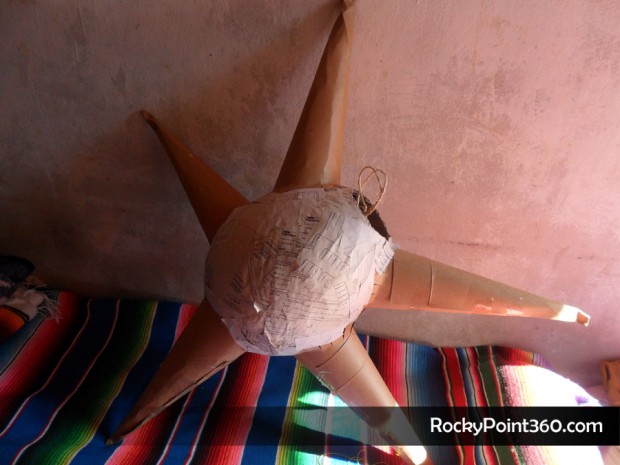 Launching off the use of a clay pot, many of the traditional piñatas still used in areas of central and southern Mexico use a pot as the main body, though this is cause for some extra precaution once the piñata is struck. Other piñatas, such as the ones most often found in Rocky Point, are made with balloons, cardboard cones, and paper mache. Traditionally, seven cones found on a piñata represent the seven deadly sins.

Here in Rocky Point, in a search for piñata providers, we were instructed to visit Hugo’s Place on Calle 32 (Rocky Point’s Mexican Curios “Rodeo Drive”). On a first visit to the small shop, Hugo’s wife Mayte showed me numerous “pre-piñatas” in developing stages. They were hoping for a rush on piñatas in the coming days, leading up to the beginning of the neighborhood posadas from Dec. 15th – 23rd. Mayte explained that although she and her husband are originally from Oaxaca, they have been in Peñasco for over 20 years. 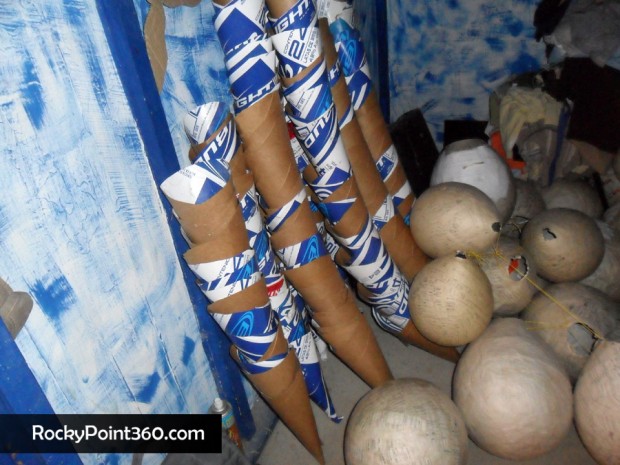 In addition to handcrafts they have at the store, many made with paper mache or recycled materials (such as poinsettias “noche buena” flowers with plastic leaves), each year the couple prepares hundreds of balloons and wraps them in paper mache while also preparing individual cones to use as the points on the piñata.

Following numerous days of drying, the artistry continues and the piñatas take their colorful form. On a second visit to Hugo’s Place, we were greeted with the colorful completed artworks – ready to be filled with candy in order to provide delight at posadas across town.

For this year’s posadas, which beyond tradition also translates into general holiday parties, when presented with a piñata you can practice this tune: 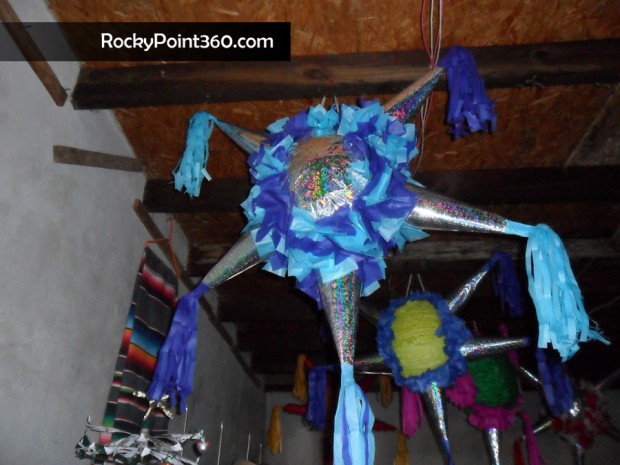