By Wendy Fregozo (Text and photos)

One Saturday afternoon, I remembered that Jesusa Ivonne (“Jesu” as we call her) had mentioned she had some items from the sea that I need when making my candles. Being near her house, I took the opportunity to stop by. I never imagined what I would find. I found her workshop, where she and her husband, Gabriel, create their crafts with seashells, and it was fascinating!

By the time I left, I found myself thinking about when I was young and we would spend Sundays going around town. We would go for a spin in La Cholla and pass the small curio shops full of small figurines of animals, such as frogs, drinking cerveza, all made out of shells and curious googly eyes. I didn’t think anyone did this anymore in our port. 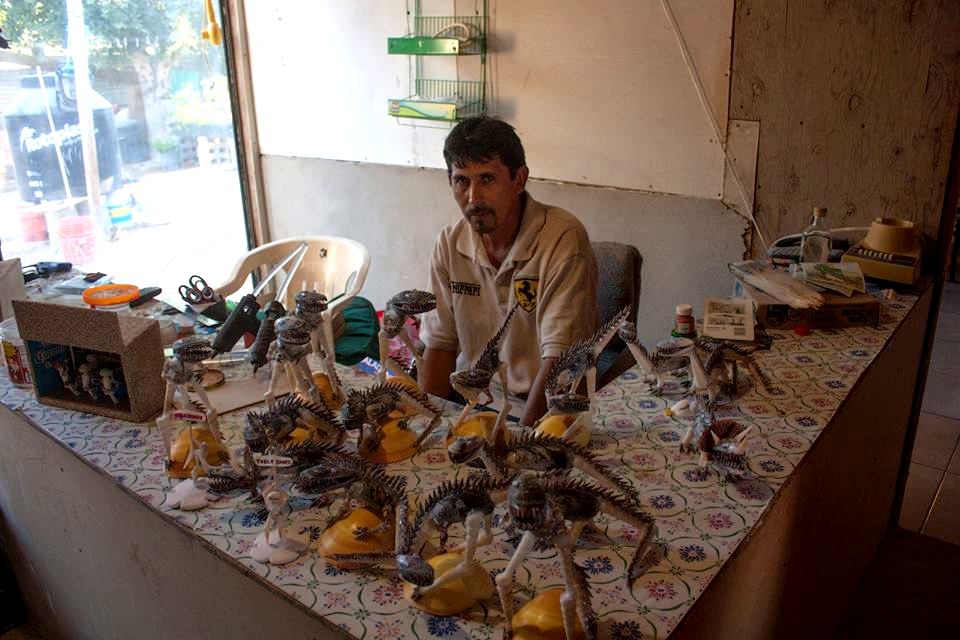 A few days later, once again in Jesu’s home, I entered the workshop and she introduced me to Gabriel, her husband. A simple man, with a timid appearance, and very calm. Seated behind his work bench, surrounded by shells and his figures, he began to tell me about his work.

Back a while, sometime in the seventies, Gabriel’s grandfather arrived in our Puerto, having come from Cumpas. Along with his wife, they decided to stay here to live. He learned how to make shell figures from a friend who lived in the area of the Mirador. At that time, there was no electricity and they made them with a flour based paste.

Gabriel’s grandfather would sell shells to the port in Rosarito where there was a person who would make special orders. He would wash the shells and, once clean, pack them into one kilo packages. Gabriel’s father would also help, even though he didn’t really enjoy the cleaning process and would complain about the smell emanating from the shells.

One day, the grandfather invited his son along to deliver a large order. There, he saw the reward of his labor and from then on Gabriel’s father continued working with shells until he passed away in 1993.

Returning to present day, Gabriel retells that he and his siblings were born into a family of artisans. As children, they were taught how to make simple figures, like cars. When Gabriel was 16, he was already making his own figures and arranging them in boxes; he would go to the beach with his brother to sell them.

He tells me things went well, but it was hard to work that way. Later on, in the malecón, some people with businesses began to put in orders and so they were introduced to selling in bulk, leaving beach sales aside (Some of these shops remain his clients to this day).

As we speak, he is finishing up an order for a client; he’ll send 200 dinosaurs he’s created to Puebla. Jesu, who’s next to Gabriel, proudly explains his figurines have traveled everywhere. She says that one in particular made its way to the Vatican and into the hands of the Pope!

This time of the year, around Semana Santa, is when they have the most work, so much sometimes that they can’t keep up. From August on sales drop but Gabriel and Jesu never cease working; they are not dictated by seasons. They like to work throughout the year and never lack creativity.  Their clients know this and appreciate their original designs and the fact they come through with their promises.

Jesu did not know how to make shell figures when she and Gabriel first met. In fact, she acknowledges she didn’t like to wash them, but bit by bit she was introduced to the art form and now she has her own designs, as well as her own clients. Individually each has their own list of clients, in order to not compete between them. “Happy together but not mixed up,” Gabriel says, smiling. They make a good team.

They go through an entire process to do their work, from collecting the shells, cleaning them, and classifying them. Not all shells work, so the shells need to be classified as to which are the best and which won’t do. They also use shells from many parts of the world that, while not found here, are necessary to develop their designs.

Gabriel can create from any idea a client may present. In asking him about his special designs, what he likes to do best, he smiles and answers, “Cars.”  He has fun making them – first there were jeeps, dune buggies, pick-ups, VW bugs, and double cabin pick-ups, and even a Hummer.

There’s a bit of everything among his creations, from a band of musicians to airplanes and boats. Jesu remembers a large bus of tourists he once made, in which Gabriel detailed each of the passengers on board.

Other strong pieces of his include cantinas made out of shells. With a glimpse inside these wooden boxes, one can take in a typical scene from one of Puerto Peñasco’s cantinas and clubs, recreated in painstaking detail with shells.

These cantina creations came about when a friend of Gabriel’s broke a similar piece, made out of wood, when returning once from Michoacan. His friend gave it to him to see what he could do. Gabriel set to it and, along with his shells, began making his now famous cantinas, which he has perfected over time.

The simplicity and humbleness that characterizes Gabriel is noted within his work; he is so modest that he has never signed his creations. He says people have suggested he do so, but for him it is more important to enjoy what he does.

Currently, Gabriel and Jesu create pieces in their home, in a small but very complete workshop.  When I visit an artisans fair or shop and come across one of these shell figures, I will appreciate it and recall the talented incognito man who doesn’t need to sign his artwork.

Gabriel Mungarro Leon and Jesusa (Jesu) Ivonne may be reached at: 388-1074, or cell-phones: 638 112 1481 (Mostly Spanish)  their work can also be seen in different spots around Puerto Peñasco (and still in some shops in the Malecón).