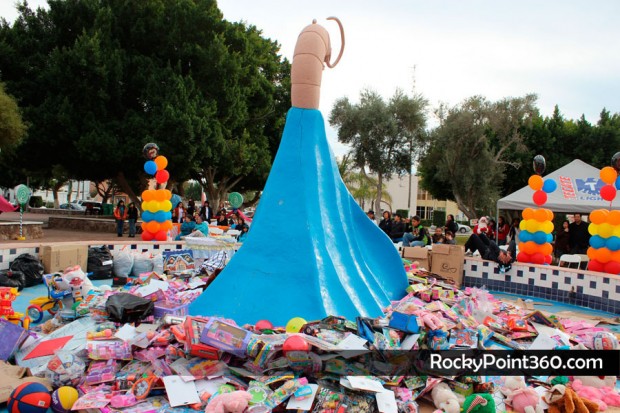 In 2010 the DIF Toy Drive collected 3140 toys, and received $50,750 pesos in donations to assist with neighborhood Christmas posadas in some of Rocky Point’s neediest areas. This year, DIF Director Imelda Zamudio Sanchez told us, the goal was to reach at least 3141 toys.  On Sunday, Dec. 11, toys, blankets, and cash donations helped the DIF surpass this goal during their annual Toy Drive at Shrimp Plaza.  When I stopped by with a handful of gifts around mid-afternoon, DIF President Marcela Albelaiz de Zepeda remarked they were well on their way to reach their objectives, and added that this year in addition to the tremendous outpouring from local residents there was also a notable increase in the amount of participation coming from the US community.

Between different entertainment acts that took the stage throughout the day, including a group of youngsters who reside at the newly opened DIF Children’s Shelter, at around 3:30 p.m. the Toy Drive emcee, former local radio announcer Eduardo Mendias, enthusiastically announced they had already received cash donations totaling 42,300 pesos. By the time the Toy Drive wrapped up at 6 p.m., the DIF had received 3758 toys, 42,750 pesos and $200 US in cash donations, 192 blankets, and 27 bags of clothes (numerounoonline.com). DIF Director Imelda Zamudio Sanchez explains in coming days her office will divide up the gifts and blankets, so they may be distributed at Christmas posada festivities the DIF will be holding in different neighborhoods throughout the city from Dec. 15 – 22.  In addition to distributing the toys, she furthered, the DIF puts on the posadas for the entire neighborhood with all the trimmings including piñatas, bags of candy for local children, warm drinks and pastries. Funds raised during the Toy Drive are used for the posadas, and DIF volunteers generally put together more than 4000 bags of candy.

DIF is the Office for the Integral Development of Families, and is part of a national system that seeks to assist children and families through the provision of school meals, vocational classes, community service projects, as well as children’s shelters, and many other valuable services and projects.  Be sure to check out the photo gallery Juguetón DIF 2011.