You never know who you’ll meet over a cup of coffee in Rocky Point. Morning coffee at Mario’s on the way to the Old Port always brings special surprises, great conversation with the “regulars”, plus insightful visits with folk who frequent Mario’s each time they come to town or even discover the coffee shop for the first time.  William Reese, a forest ranger at the Grand Canyon, is precisely one of these folk who followed the aroma of coffee into Mario’s on the last day of 2011 after cycling down from Organ Pipe National Park in AZ. 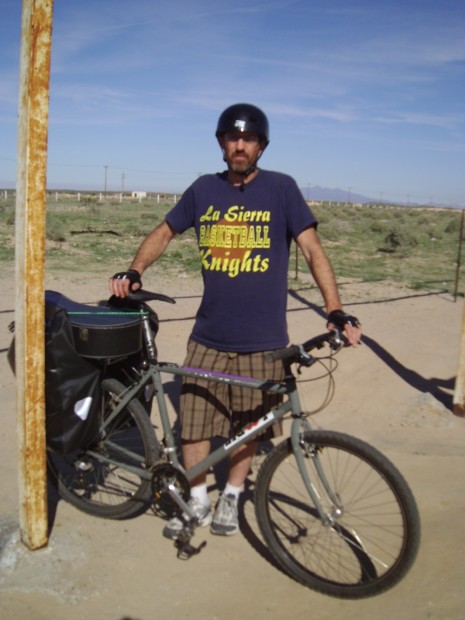 In training for a bicycle trip through Baja California sometime in 2012, Reese shared his jaunt through Rocky Point was part of an intense training program that began around Thanksgiving with a round-trip ride from the Grand Canyon to Phoenix. On this occasion, he had parked his truck at Organ Pipe and cycled across the border to this spot where the desert meets the sea. After a night at the historic La Roca hotel in the Old Port, and of course following coffee at Mario’s, William tuned his bike before heading out to continue his ride over the Coastal Highway, with plans to head toward Mexicali and then back to Sonoyta over Highway 2 (which some had said was similar to what it would be like biking on the narrowish highways through Baja).

Reese said he enjoyed the friendliness of the people of Rocky Point during this, his first trip to the area. We caught up with William once more at the “oh-my-goodness-how-does-one-make-this-turn-on-the-way-to-El Golfo” turn off, where we snapped a picture as he purchased a drink and went rolling on, chasing the sun into 2012. Buena suerte William!