In Mexico, September is known as “mes patrio”, or rather month of the homeland. From the early minutes of the first of the month, streets within the center of the country become adorned in green, white, and red, along with the national eagle symbol. This fervor is seen along sidewalks, with sellers pushing their carts and wares of sombreros, flags of varying sizes, false moustaches, and other decorative items.

While 5 de mayo (Battle of Puebla) is celebrated on a grand scale in the U.S., in Mexico the “most patriotic” date is that of September 15 (and 16th), in commemorating Mexico’s Independence. Families and friends gather to feast on tacos, tostadas, guacamole, pozole, and mole while drinking cerveza and tequila (well, not just these though they are iconic for the patriotic celebrations). At 10 p.m., “El Grito”(Independence Cry) rings out (from City Halls across the country, and the National Palace in Mexico City). This is the largest and most celebrated civic event in all of Mexico.

Tradition states the Grito celebrations began in 1810 when Father Hidalgo, as many other Mexicans of the time, adopted the ideals of independence that were spreading across the country through liberal groups (due to the French invasion of Spain). In 1810, Hidalgo joined one such group, that of Querétaro led by Corregidor Miguel Domínguez, and his wife Josefa Ortiz. Several officials from the so-called Dragon Regiment of the Queen, among them Ignacio Allende, Ignacio Aldama, and Mariano Abasolo, would later join the conspirators.

At that time, Hidalgo began recruiting party leaders and to buy and/or build arms. Nevertheless, at the beginning of September 1810 the Queretaro conspiracy was discovered by the Reigning Spanish Government.

Allende arrived in the city of Dolores (Guanajuato) on the night of September 14th, and neither he nor Hidalgo knew they had been discovered. Though various of their conspirators had already been apprehended, on the night of September 15th Doña Josefa Ortiz sent a message to the city of Dolores, warning Hidalgo and other liberators of the oncoming threat of imminent danger.

Hidalgo then marched to the jail in Dolores and set the prisoners free, giving them police weapons and arms from the Queen’s Regiment. In the dawn of September 16th, Hidalgo rang the church bell in Dolores in order to call the people together within the church’s atrium.

The “Grito de Dolores” is considered the act that began Mexico’s War for Independence. In recalling this act, each year at 10 p.m. on September 15th, executive leaders across the country address crowds anxiously anticipating the event (A solemn speech, in an elevated voice across the crowds in order to get passions flowing). Generally, this Grito contains the following phrases: 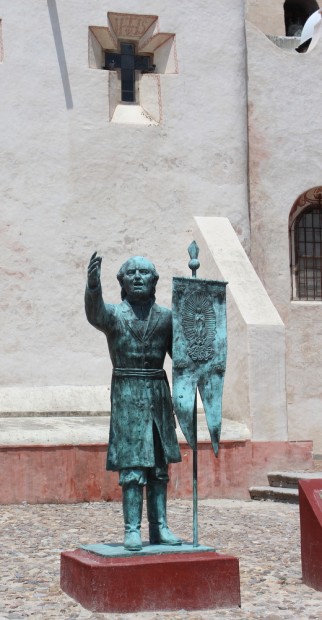 Many watch the festivities on TV, with the official Grito coming from the President of the Republic who rings the same bell Priest Hidalgo rang in Dolores in 1810. The event is transmitted from the main plaza, zócalo, in Mexico City. Similarly, at 11 p.m. in cities across the country people gather near City offices to hear the Grito from a government official (usually the Mayor). Then, there are traditionally fireworks and the fiesta continues often until the next day.

Yet, September is not called the “Month of the Homeland” solely due to this date. Rather, there are many other important individuals who held define our nation:

Sept. 8, 1768: Josefa Ortiz is born in Valladolid (Yucatan); she is also known as La Corregidora, an insurgent and pillar of Independence.

Sept. 13th commemorates “Los Niños Héroes” (The Children Heroes). These were young cadets at the Military College in Mexico City who confronted U.S. troops at the Battle of Chapultepec in 1847.

Sept. 15, 1830:  Porfirio Diáz is born in Oaxaca (Oaxaca), once a hero he is best known as a villain of the later Mexican Revolution.

Sept. 25, 1873: Reform Laws incorporated into the Constitution of 1857; together these laws achieved the separation of Church and State in Mexico.

There is lots to celebrate throughout September – so, grab your caballitos (shot glasses) and Tequila and  ¡VIVA MEXICO!