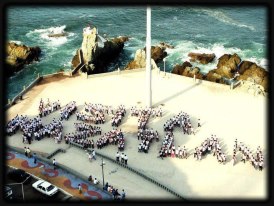 It began with a picture. Local dance and yoga instructor, cultural promoter, and accomplished dancer Mariana Zatarain one day came across a picture of tourism students from the Tec Milenio University in Mazatlán who had organized to become a human sign, inviting people to visit Mazatlán. She started to share the idea of doing something similar here in Puerto Peñasco, and so the flicker was lit. The spark was picked up by Russ Black of Peñasco Recreation Co., whose excitement for the endeavor was contagious and soon spread to others in town, including us at RockyPoint360. Though we imagined the “first call” to do such a feat may result in only being able to form the letters “RP”, or possibly only “P”, we took on the challenge. 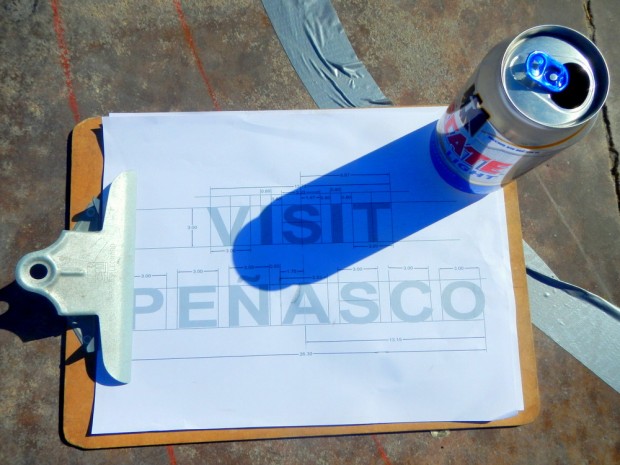 On a Wednesday, Russ asked, “So, are we going to do this?” That afternoon an Event Page was created on Facebook and the message went out – anyone and everone was invited to wear either black or white t-shirts and gather at the malecón on Sunday, Oct. 7th, mid-afternoon, for an attempt at spelling out VISITA PEÑASCO. The “flash-mob” style meeting time was 4 p.m. Two hours before the appointed time, armed with water bottles, a meticulously drawn out auto-cad drafting plan of the plaza and letter design done by RockyPoint360 co-founder and local architect Plinio Rivero, and a role of duct tape, we made our way to the spacious Plaza de los Gobernadores, centerpiece of the city’s malecón in Old Port. 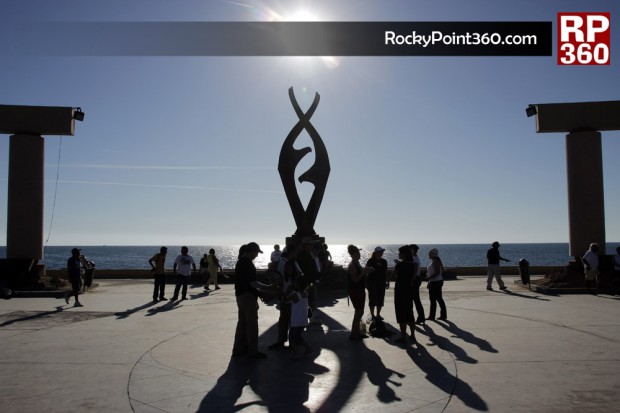 Letters had been sketched out to measure about 10’ x 10’, with calculations that we would need at least 400 people to pull off the whole thing. We were five: Jimmy Maldonado (the photographer we would be sending up in an ultra-light for the picture), Plinio and Ariel from RP360 who were measuring and outlining the letters, myself, and Russ – who took on the task of inviting anyone who walked by to come back at 4 p.m. for the picture.

As the minutes marched past 3 p.m., and those of us gathered were beginning to wonder if we would need to lay down for the project so we could take up more space, I set to texting amigos as a reminder to come on down. In the distance, we could see one, then two, then three individuals headed our way, all wearing white or black t-shirts. Mariana arrived, in a flowered blouse, and I misunderstood her to say she had another event (gasp), but she meant prior to this. 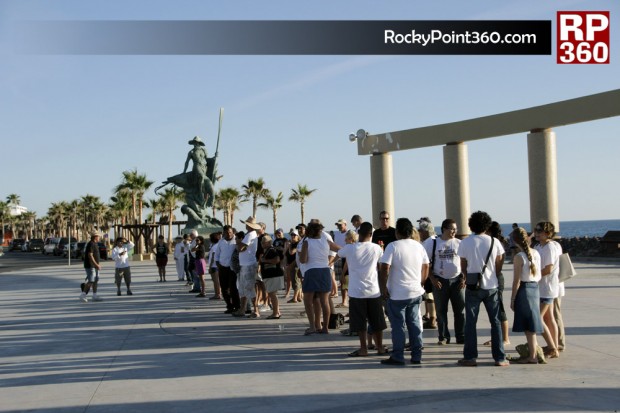 She set to work in imagining how to “use our assets” and get our letters made. Soon, our amiga Susana arrived with extra t-shirts for Mariana and others, while bit by bit more people trickled in. 10, 20, 30, 40… Freddy from Friday night’s new romantic radio program on XEQC, Amilcar and family, Jim and Janet, Anda and Rich – and their black & white spotted dog (perfect!), Guille, Eddie, Ana Karina and family… Naomi and amigas, Manny, Ricardo from the news, Melody and Carl, Charlene, Tony the photographer, they came…

Mariana and I puzzled over how we could use those in attendance to at least spell out Peñasco, which was already displayed on the plaza in duct tape. First strategy, one person behind another – we made it to the letter Ñ; second strategy, (look, 10 more people!) everyone arms-length apart, each one placing their hand on the other’s shoulder – we made it to A; third strategy (look, another 7) – everyone in jumping-jack form, stretching as far as each could from fingertip to fingertip – we placed one or two folks on S, C, and O. People kept trickling in, many with margaritas in hand; and then there was the wedding party! Yeah for the wedding party!  A special shout-out to Maru from EcoFun who had invited our longtime amigo Kenny and his new bride, and they in turn brought about 30 friends and family, who quickly became parts of A & S. Members from Agua de Coco walked up – to the O! Kit, amigos, and margaritas – to the C! 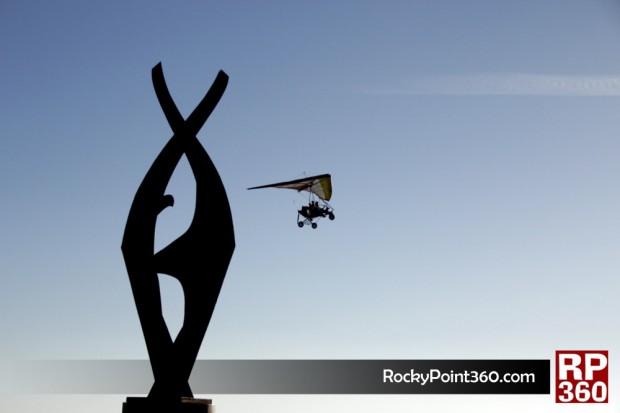 At this point, Jimmy had taken off to catch the “ultra-light” near Sandy Beach and, once everyone knew their spot on their letter, we all sought shade and a cool drink. Some folks from Las Conchas arrived; we showed them where they could stand on the S – which, now looking back, we should’ve sent some to the E. “Ten minutes,” came word from Russ, “Jimmy says in ten minutes he’ll fly over.” “5 minutes…” We all looked in the direction of Sandy Beach and could just make out a mosquito outline approaching us through the air – to your places! “Last call!” Everyone filtered into their spots; Mariana and I sped by each letter, double-checking they were more or less complete “How are the Os?” “Bien!” “Cs?” “Bien!”  I hopped into an empty spot on the “A”, right next to the bride, and we all looked to the skies.  The mosquito grew larger as Jimmy’s photo-flight drew near; on his first swing by we kept our arms stretched out, then we all waved up – being all we could be as our respective letters.

After Jimmy’s second sweep, taking pictures of all of us with arms outstretched, the excitement was over as the mosquito retreated back toward the condominium skyline on Sandy Beach. In the end, we had gathered together about 150 people, a small dog, and an ice-cream vendor with cart…only about 300 off our goal. Yet, we somehow managed (with much imagination and creative liberty) to spell out Peñasco in this, our first intent (pulled off in about 4 days). Talks are already underway to promote a 2nd photo round; this entails selecting another date and getting the word out more through publicity, local schools, the radio, etc. 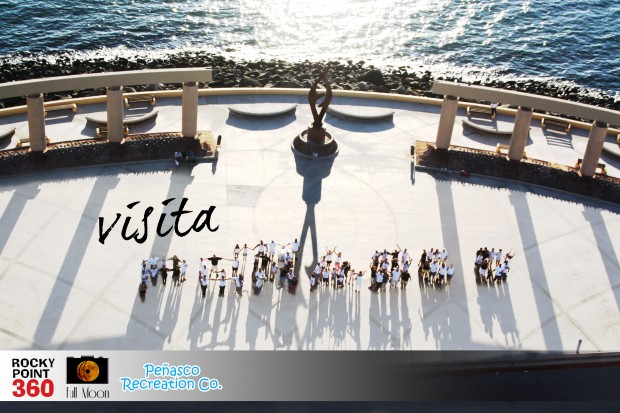 Some of the lessons learned from our Visita Peñasco social experiment: 1. We need more people! 2. Let’s pick a time of the day when the shadows don’t stretch out in front of us – say around 11 a.m. or noon? 3. We’ll pick one color for shirts (maybe) 4. The letters will need to be much bigger next time, 20’ x 20’ arqui? …and lastly, we need a fiesta and música to go along with the whole event!  Stay tuned for a second call and come be a part of VISITA PUERTO PEÑASCO (that’s about 20 letters folks)!