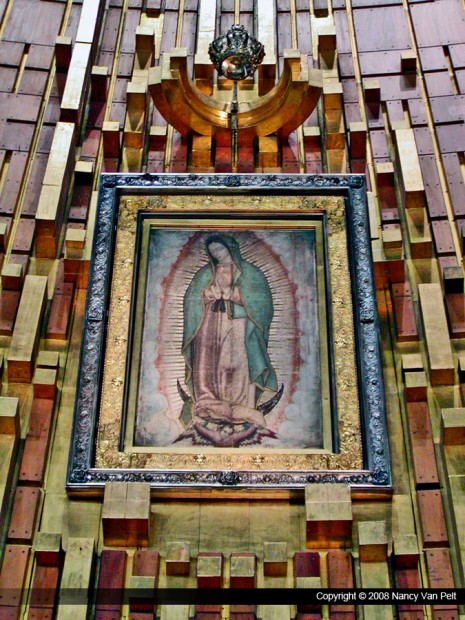 As another sign the holidays are here, on Dec. 1st many from the community of Puerto Peñasco, led by the Mayor and his wife, once again began the traditional evening pilgrimage from the Church in the Old Port to Nuestra Señora de Guadalupe in preparation for the day in honor of Mexico’s patron saint on Dec. 12th. The evening pilgrimage, which will be daily from Dec. 1st through the evening of Dec. 11th, begins in the Old Port around 6 p.m. and makes its way to Blvd. Juarez with people walking along the boulevard until they reach their destination on Blvd. Simon Morua. (Note: Dec 12th will also be a bank holiday)

As we move closer to the Día de la Virgen de Guadalupe we will provide a more in depth look at the fascinating story of this beautiful image that may be seen in paintings, altars, paper decorations, and in numerous spots across the country.

As reported on this morning’s Noticias with José Antonio Perez on 1390 am XEQC, as well as on the site penascohoy.com the evening pilgrimages are scheduled to include a variety of groups. For example, on the first chilly night firemen, police, and various individuals from professional and charity groups were part of the initial pilgrimage. Dec. 2nd: the pilgrimage is by the “Christian Family Movement”, Dec 3rd: pilgrimage in commemoration of San Francisco Javier, Dec. 4th: pilgrimage of youth in general, Dec. 5th: railroad employees and families, Dec. 6th: pilgrimage for those involved in transportation including drivers (taxi, dump truck, and services), Dec. 7th: School of the Cross, photographers, social security workers, telegraphers, and postal employees, Dec. 8th: pilgrimage with federal and state employees, and from TelMex, Dec. 9th: business employees, owners of second-hand and convenience stores, employees from Las Conchas and involved in tourism, Dec. 10th: pilgrimage of children, parents, and those in catechism.

On Dec. 11th, the eve prior to the much honored Día de la Virgen de Guadalupe, the pilgrimage will be with fishermen, musical groups, and the entire community of Puerto Peñasco. The evening will conclude with a community festival and holiday fair near the Nuestra Señora de Guadalupe church. Across Mexico on Dec. 11th and on Dec. 12th,  midnight and early dawn renditions of “Las Mañanitas” will be heard as people sing once more in honor of La Virgen.

What is my franquicia? or Declarations into Mexico revisited

Mariachi music recognized as element of World Heritage by UNESCO