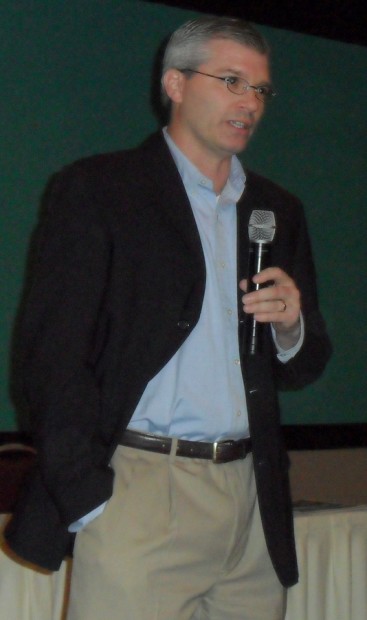 On Wednesday, Jan. 11th a fairly substantial number of people from the U.S. residing in Puerto Peñasco gathered within the Santa Fe Salón of Hotel Peñasco del Sol in order to meet and greet Chad Cummins, the Consul General from the U.S. Consulate in Nogales.  Cummins, who has been serving in Nogales for the past 5 months, had previously worked in consulate offices in other parts of Mexico, Honduras, Senegal, and most recently Calcutta, India – or, as he explained, “a small town…of about 17 million people.”

Cummins wanted to visit with the local U.S. community here in Rocky Point to both touch base and provide information as to what their offices are able to do. Cummins was accompanied by two Vice Consuls currently stationed in Nogales who also helped address questions from the audience.  The Vice Consuls were from the American Citizen Services office of the Consul and they, along with Cummins, invited U.S. citizens to contact them with any questions, emergencies, or other issues as needed. Though there is a virtual consulate on the 1st Wednesday of each month (online), Cummins plans to continue visiting with the U.S. community in Rocky Point every six months or so in order to maintain strong ties with people living in this area. Cummins mentioned he had met with Peñasco Mayor Alejandro Zepeda Munro one day prior and they discussed positive advances that have been made in the area with regards to security and improved police equipment and vehicles.

To contact the U.S. Consulate in Nogales during regular office hours (8 a.m. – 5 p.m., Mon-Fri) from Peñasco you would dial 01-631-311-8150 and to speak with a person (bypassing the computer options) dial “0”…and keep hitting “0”. They indicated their goal is for all inquiries to be responded to within 24 hours.

You can visit the Nogales Consulate site at: www.nogales.usconsulate.gov and for non-emergency situations, the Consul may be contacted at:  NogalesACS@state.gov