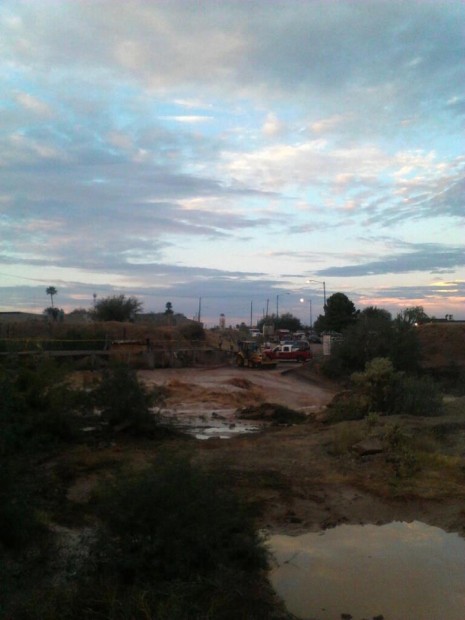 Work to replace the main city bridge in Sonoyta this Spring/Summer has led to shared adventure stories of navigating through the “El Vado” detour (often turned roaring rapids wash), or exploration of alternate routes with sights set on reaching Puerto Peñasco. In addition to rains this monsoon season, the Sonoyta Rapids of 2012 has also spurred us to learn more about watersheds, washes, and dams. From the US side, in the Rio Sonoyta river basin, there are five washes that appear to feed the river: Gu Vo, San Simon, Pisinimo, Vamori, and Chukut Kuh. In a quick review of the Vamori Wash at Kom Vo, AZ, for example, we can see that the “normal” depth at this time of the year seems to fluctuate between 4’ – 6’, though from Sept. 6th  –  14th this reached up to nearly 11’ – meaning, you guessed it, more water downstream (data.afws.org)!  Water from these washes eventually crosses the US/Mexico border, passing through Sonoyta before winding through the Pinacate Reserve, and then to the Southwest of Peñasco as it makes its way toward the La Pinta Estuary close to Mayan Palace.

Those traveling to Puerto Peñasco via Sonoyta in recent weeks have become more familiar with Rio Sonoyta than I think we ever had in the past, with sudden and/or prolonged closures of the “Sonoyta Detour”. Now, though the skies are blue and the aforementioned detour is back open (and dry), areas stretching toward Mayan Palace are seeing where the Rio anxiously travels to meet up with the Sea.

Yesterday, Sept. 17th, the latter caused parts of roads out toward developments near Mayan Palace to be closed off, with “transport assistance” coming from various sources including local adventure company Eco Fun Rentals who shuttled Mayan staff from roadside to roadside.

Getting back to Sonoyta…. during our early morning Sonoyta Detour Updates call to the Police Dept. on Tuesday, Sept. 18th, we were pleased with confirmation of a report we had heard that the wash was dry, and road was open to both lanes of traffic! Still, in sharing tips from fellow travelers, it is important to remain alert to large potholes that continue to make their presence – or have grown – along the detour route (not to mention after the detour route when heading to Rocky Point – just before Pemex/Oxxo).  In a side remark, the police officer mentioned there is a good possibility that 2 lanes of the new 4-lane bridge in Sonoyta will be opened soon to “general traffic”, or rather not tractor trailers but for cars and “family vehicles.” We are anxiously awaiting confirmation of when exactly this may happen!