Of Cats and Dogs 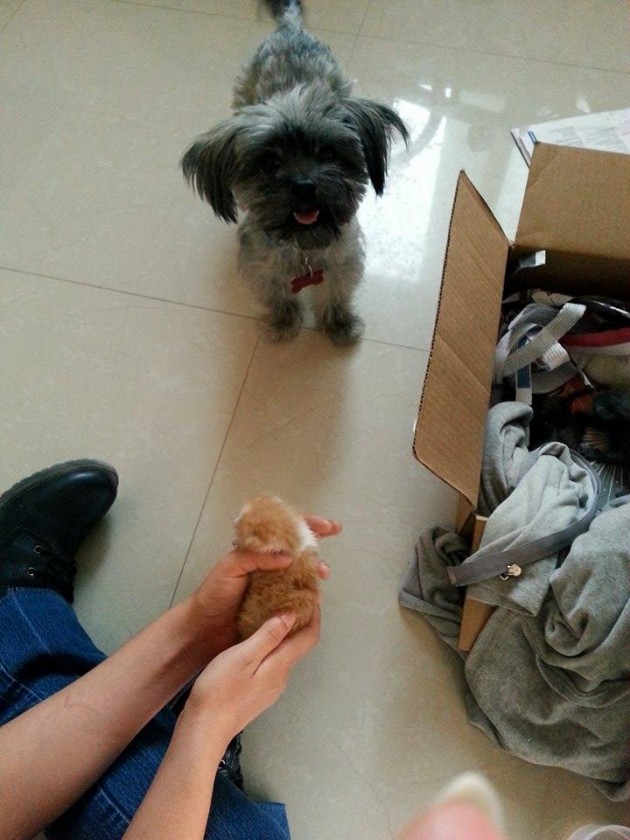 Many of you already know Tábata, who came into our lives at the office just last year, precisely as we celebrated our October anniversary (Oct. 26th). She was a rescue dog.

Since then, the routine has been more or less the same with a few variations here and there; we get to work, take a walk around Plaza del Camarón, I order fruit from downstairs, we go up to the office and Tábata runs over to greet Plinio (first, always), then Sami, Daniel, Maribel, Dan, etc.. Sometimes she plays hostess as she’s somewhat restless; love at first sight after she’s barked at you.

Yet, today on our walk something out of the ordinary occurred; Tábata came across four kittens. Beyond a hunter’s instinct, as I imagined she would bark and growl as she usually does, she did quite the opposite. She smelled one out, somewhere in the grass, picked up her snout and got a whiff of the air before finding the other three in a corner. I don’t know how, but before I knew it she had the four kittens together and was sniffing them over, one by one. A larger dog came by, slowly, curiously, to which Tábata responded with defensive barking, with the kittens behind her.

I was looking all around to see if I could spot the mother cat, somewhere watchful in the distance. But, nothing. Well, nothing besides a number of dogs meandering through the plaza.

“I think a woman came over and dropped them there,” said a man. “I saw her crouch down and then the kittens were there. I imagine she knew someone would find them.”

I looked at him skeptically; Tábata hadn’t left their side.

“Let’s go Tábata, turn around,” I instructed. We hadn’t even begun our walk. But she wouldn’t move. I pulled on the leash, but she pulled back with resistance, which was odd because she loves walking around the plaza. She looked at me with her large oval eyes.

I wanted to give the mama cat a chance to come back, but apparently Tábata had understood something completely different. I guess the kittens had informed her “we don’t have a mom” and Tábata’s small heart was crushed. She had no intention of moving.

I took in a deep breath and began to look for a box. Alright, we’ll figure something out. With those eyes I could see I wasn’t going to have problems with her.

The man came back over with a box and I placed the kittens inside. Tábata sniffed each one, sniffed around the grass and then raised her head as if in approval, saying, “yes, they’re all there.”

Have you ever seen a dog smile? Like when you throw it a ball, or it discovers a new toy, or sees you again after you’ve been gone? Well, I do believe I saw Tábata smile when I picked up the box and placed it under my arm. She walked proudly back to the office.

“You won’t believe Tábata’s adventure today,” I told everyone as I entered, “She found four kittens and apparently has adopted them. Yes, my rescue dog rescued four kittens.”

I didn’t know what to do. Sami and Plinio told me there was milk in the fridge and helped me look for a straw. I called the vet, who gave me instructions; and then called a friend to come over to help. All of us remained alert to the kittens’ calls.

Yet Tábata seemed to have everything under control. She wouldn’t take her eyes off them. I gave each of the kittens some milk through use of the straw while we sent out for some syringes and other items. My rescue dog cleaned and cleaned them; between licks and lapping she kept the four kittens under control. What should I do with them? Well, she taught me. They sort of ate (the straw really wasn’t efficient), and sort of slept. Tábata remained watchful, with her head inside the box at times – alert to any sound or movement. They were somewhat restless and she would lick and nudge them. She even forget about her role as office hostess or barking at visitors.

Two of the kittens are quite active, and the other two are pretty lazy.

It wasn’t until after using the syringe to feed them, not to mention a good clean-up first by Tábata and then with wet-wipes as instructed by the vet, that they were then clean and well-fed. That’s when the four fell into a slumber without a fuss, and my dog went to her own spot to rest. Tábata awakened at one point and moved over to be closer to the box.

Tábata is resting as I write, and so are her kittens. There seem to be three females and one male. Help! I would love to find them a good home as they grow!

If you are interested in hearing more about Tábata’s kittens – or adopting one – please let us know at info@rockypoint360.com