Mayors from across Sonora, as well as representatives from the business sector, have joined the preventative steps implemented by Governor Claudia Pavlovich Arellano, with the going of reducing contagion risks of COVID-19.

At round tables with both sectors, the Governor and representatives of the State Government reported on the current situation in Sonora given the presence of the virus. They detailed steps that have been taken to decrease risks among the population.

Furthermore, Governor Pavlovich met with members of her legal and broader cabinet, instructing them to promptly follow the steps outlined concerning care for the public, and administrative steps meant to reduce risks.

Necessary prevention steps were taken for the meeting with the state’s mayors, and details given as to steps that have been taken across the state since the first Covid-19 cases arose in various countries, as well as Mexico.  These measures were strengthened after the first confirmed case in Sonora (in Hermosillo on March 16), one of the most important of these being that of the #QuédateEnCasa campaign (Stay at Home), and fostering clear information to provide certainty, peace, and security to state residents. 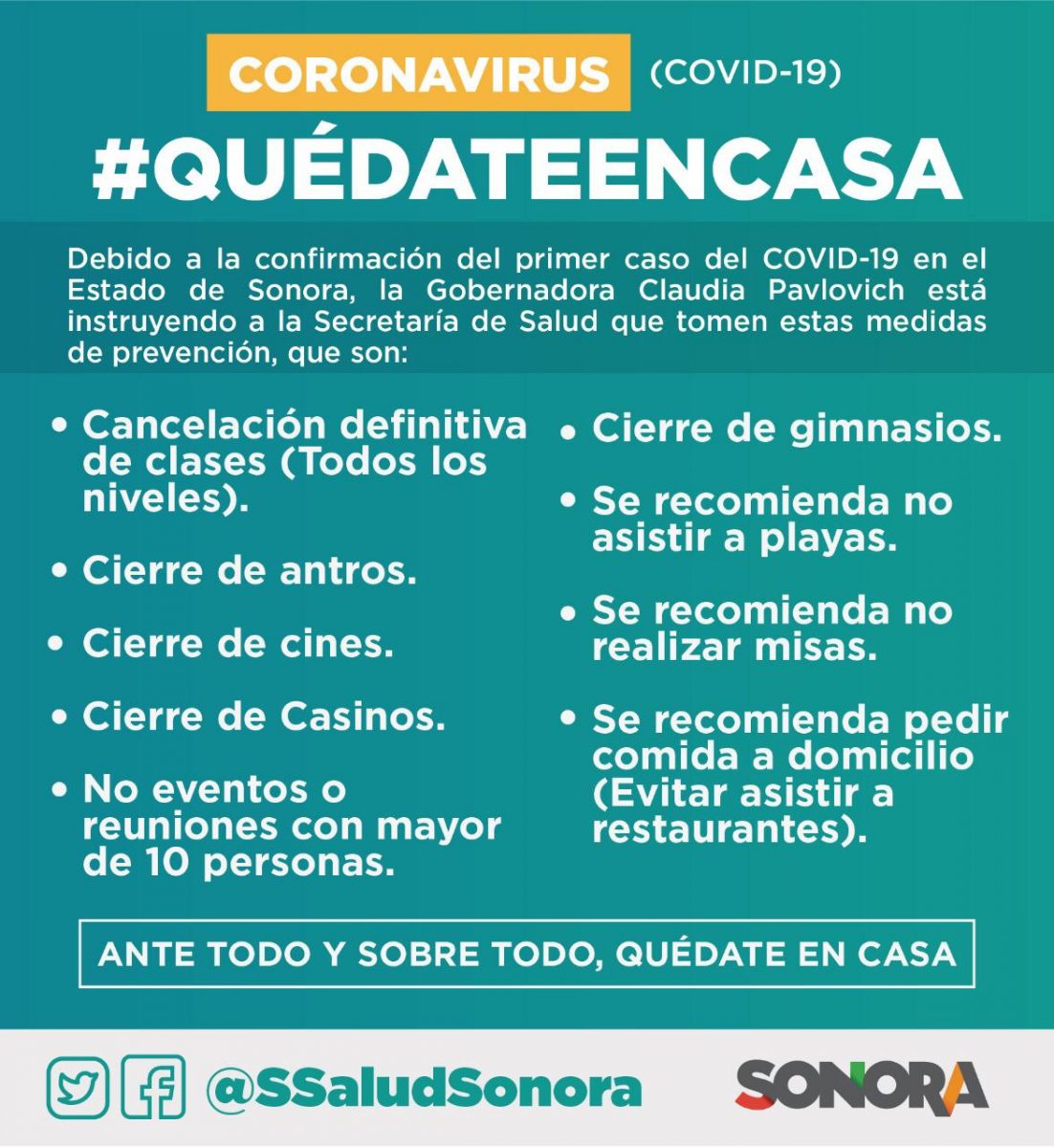 “I kindly request that through your social networks, in the press, and in all municipalities that you post the daily reports of Dr. Gerardo Álvarez Hernández (General Director on Health and Disease Prevention in Sonora), as well as the clips repeated every day, five times a day, to ensure we are fully informed of what’s going on,” expressed Governor Pavlovich.

Along with Health Secretary Enrique Clausen Iberri, and Villa Pesquería mayor Francisco Antelmo Mendoza Navarro, President of the Sonoran Municipalities Health Network, the governor decided with the mayors that, as a prevention step, as of Tuesday, March 17th and through Easter week (April 18th), access to public beaches in the state be controlled, addressing the call to not have crowds while thereby preventing possible contagion of the virus.

In addition, she called for the cancellation of patron saint festivities and social parties where more than 10 people are gathered, and reiterated the closure of non-essential services such as gyms, movie theaters, casinos, as well as those that provide service to the public across the state than can be done electronically.

“I know no one likes to cancel events, nor to tell people to. We have to share with them at this point in time we are not (prepared) to receive nor import this virus, and that’s the reality.  There are many municipalities that are doing the right thing, and simply isolating their people so they stay at home. By doing this at the right time, many cases would be prevented, as if we do so later it would not. Now is the time,” she reiterated.

“We have joined in the tremendous handling of the matter the Governor is doing for the benefit of all Sonorans, the wonderful work of the Secretary of Health, (and) we are looking at this with the goal of preventing an epidemic. The Red Cross also joins in the medical aspect of pre-hospital care for those that need it,” stated Freaner.

Andrea Celeste Ramos Erivez, mayor of Naco, emphasized prevention is of the utmost importance, and support of Governor Pavlovich’s strategy, stating that each of the 72 mayors in Sonora must inform their communities about prevention measures.

CEDO 40th Anniversary – For the Love of the Sea