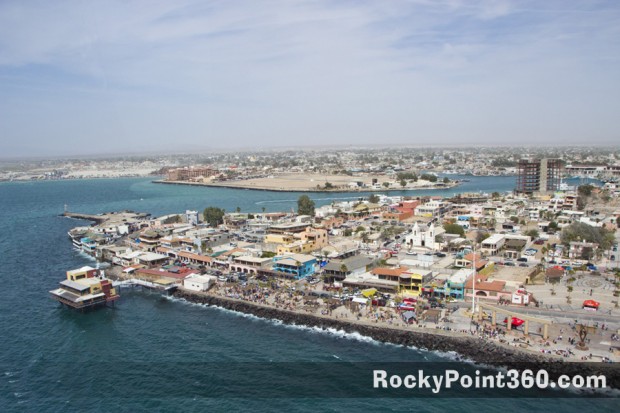 With the majority of local hotels and rental providers reporting 100% occupancy over the recent Easter weekend, Puerto Peñasco’s status as a top tourism spot continues to grow stronger. Hector Vasquez del Mercado, President of the local Convention and Visitors Bureau (OCV), announced this year there had been a 6% increase in round numbers for weekly and weekend occupancy rates during the busy Semana Santa vacations (Holy Week) over 2011. Last year, during Semana Santa, hotels reported 63% occupancy during the week and 80% on the busiest weekend, representing about 56,000 people in all.  This year, the average weekly occupancy rate was 69% during the week and 86% for the weekend, pointing to approximately 61,000 visitors and an economic boost of nearly 2.2 million dollars (based on estimates of $35 US/person daily). It is worth noting these numbers are solely based on reports from hotels and rental providers, though does not take into account the tremendous amount of people who chose to camp on the beach, stay with family members or friends, or those who own vacation homes in town. Vasquez del Mercado estimates these additional considerations, along with those who chose accommodations in Sonoyta and would drive down for the day, brings the total number of Semana Santa visitors to Puerto Peñasco up to around 70,000 to 75,000 (or rather, nearly double the city’s population).

As has been the growing trend in recent years, the majority of Semana Santa visitors to Puerto Peñasco came from the Mexican states of Sonora, Baja California, Chihuahua, and Sinaloa. However, there were also a large number of people from the US who chose to spend the holiday weekend in town, most notably from Arizona and California. Vasquez del Mercado explains the goal of the Puerto Peñasco OCV is to combine both the national and international tourism markets, noting since last year they have put tremendous effort into recovering tourism from the US, which had seen a marked drop, while also working to conserve and sustain the growing national market.

Vasquez del Mercado expressed appreciation and gratitude to the various police agencies, volunteer groups, and safety providers for all their efforts in ensuring a safe Semana Santa break overall. The increase in the amount of 2012 Semana Santa visitors to Puerto Peñasco comes on the heels of an upturn in numbers of Spring Break visitors.