Departing from the North and making their way across the Sonoran Desert to enjoy sunny days on Mexican shores, Chapter 8 Mexican Connection members from the Escapees RV Club can be readily spotted in groups this time of year, facing the Sea of Cortez once they’ve reached their resting grounds. This year, the active adventurers picked Rocky Point for their “Rally on the Beach”, hunkering down at The Reef RV Park from Feb. 3rd – 16th.

“We have 60 RVs this year, and 119 people, which is more than the last few years,” explained Wagonmasters Orene & Larry Brown during a recent conversation at Wrecked, which had become the group’s make-shift “hub” that day and was bustling with preparations for both a silent and live auction charity fundraiser

“These 60 spots were filled in just 5 days! With 47 on the waiting list,” Orene detailed, “There are about 65 new people in this group. This says to me that people are not afraid to come to Mexico.”

“People were just waiting for registration to open,” Charity Chair Margaret Jenia tells me later, “and the registration that came in from the longest distance was from Iceland where the couple were traveling!”

According to their website, begun initially in 1985 in San Carlos, Sonora, the main goals of the Escapee’s non-profit Chapter 8 Mexican Connection are to: 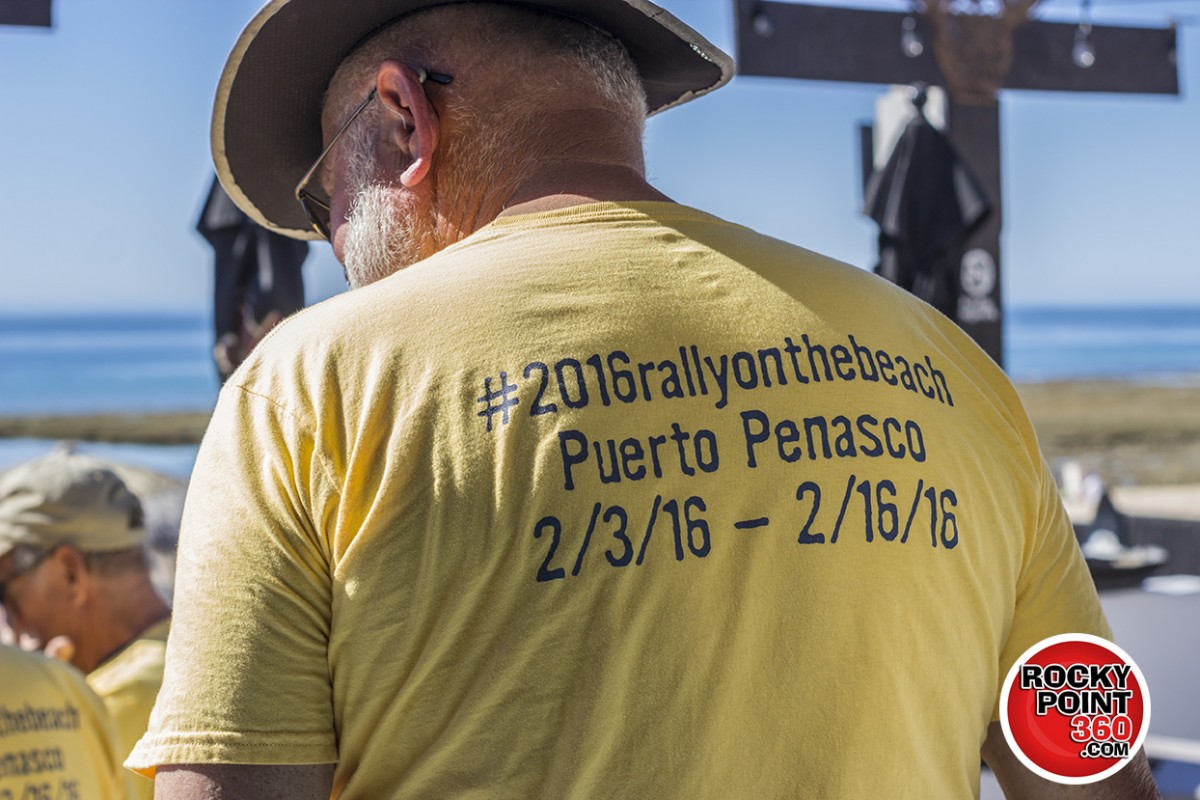 Orene indicates, “a little bit more than 50% of our mission is charity, so every rally we have a Charity Chair.” Jenia, who along with her husband Frank is part of the RV group though have their own “nearly year-round” place right here in Las Conchas, is this year’s Charity Chair. As a whole, the Mexican Connection Chapter 8 has raised between $4000 – $8000 USD during their rallies, not to mention in-kind donations. Following careful examination by the Charity Chair of numerous organizations, and visits to churches, food programs, and schools, the Chapter members then meet during the rally to decide exactly where donations will be best distributed. With the auction nearly ready to start behind us, which also represents a good part of the group’s fundraising activities, final numbers regarding donations from this year’s rally weren’t quite ready at the time of our interview.  Orene remarks, “With 60 rigs we expect to be closer to the higher number, and a lot of in-kind donations: diapers, cleaning, medical, sports, hygiene, school supplies, housewares, blankets, clothing, lots of stuff….”

In addition to their charitable efforts, the Connection folk know how to explore and have fun! Their week-long activities in Rocky Point have included whale-watching with EcoFun, city tours (in three different groups) with Russ Black of Peñasco Recreation Co., a Jeep trip led by Frank Jenia, golfing, fishing, quads, walking and shopping around the malecon, their own Mardi Gras fiesta [complete with masks and beads – plus “#1” beads for the group’s first-timers], and a Saturday adventure to the Schuk Toak Visitors Center and craters of the Pinacate Biosphere Reserve. Oh, not to mention a number of the Connection members also met Mayor Kiko Munro who attended a Super Bowl function at Wrecked early in the week. The Mayor, regardless to say, eagerly looks forward to the RVers return in the future.

Now in its 31st year, the Mexican Connection Chapter 8 forms part of the over 30 interest groups under the bigger umbrella of the Escapees RV organization, which has a membership of about 42,000 from across the U.S., Canada, and even further abroad. Headquartered in Livingstone, Texas, “Escapees” developed from the original abbreviation of the club’s main concepts Support – Knowledge – and Parking (SKP…go ahead, say it fast) and also, as the organization’s website indicates, “Special Kinds of People who are always ready to help each other.”

Mexican Connection Chapter 8 last visited Rocky Point for their rally in 2012, which was followed by San Felipe (2013), Ensenada (2014), and Kino Bay (2015). “We can only go about 200 miles from the border,” Larry Brown begins to explain, “because there’s no ultra low-sulfur diesel (in Mexico). It’s really a problem – if we could be assured by Pemex that they have low-sulfur diesel we could go further down into Mexico.”

As folk filed in to begin bidding on the silent auction, we started to wrap up our conversation with the Wagonmasters emphasizing, “We were really fortunate that Kelly, at Wrecked at the Reef, donated this place for our auction. It was nice of her to do that. Gus Brown (at The Reef RV Park) has been incredible…INCREDIBLE! We have never been treated so well, anywhere! He’s really been wonderful. The Reef, Wrecked and the restaurant Mare Blu next door have been fabulous.”

“What was the take away for a lot of people, especially the new people as far as Mexico…and Rocky Point in particular?” I ask, “Do you think people will come back?”

“Some are now going to stay for an extra week or two,” chuckles Orene, “and Larry and I will be back for a month in October! A clearly marked visitors center coming into town, with maps and information, would be helpful.”

“This (Puerto Peñasco) can also be a starting point for people to launch,” Larry adds.