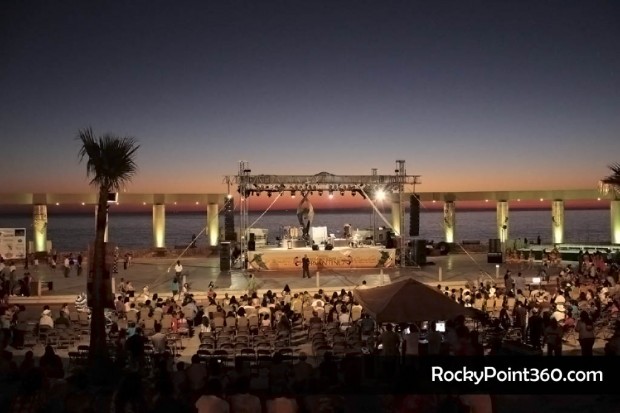 For a third consecutive year, the Puerto Peñasco extension of the famed International Cervantino Festival brought music, art, dance, opera, and fireworks to enliven the city this Fall. From Oct. 21st thru Oct. 23rd, cultural activities ranging from film to the display of items made from recycled materials, to an exhibition of work by local painters, photographers, and welders complemented local dance performances and internationally renowned musicians as the Cervantino once again drew in local crowds, families, and tourists alike.

Following the festival’s official inauguration by Mayor Alejandro Zepeda Munro on Friday, Oct. 21st, fireworks lit up the Old Port as local dance groups, story tellers, musical groups from the city’s Technological Institute, living statues, and roaming opera singers took center stage. On both evenings, events began around 5 p.m. as the audience streamed in to fill up chairs that had been set up for the festival, or find a good spot on the steps that rise from Governor’s Plaza up to the statue of Colosio. On Friday night the main performance was that of the Buena Vibra Social Sound & Circus Orchestra from Hermosillo, Sonora, while on Saturday the melodious voice of Hernaldo Zuñiga from Nicaragua enveloped all those present.

The International Cervantino Festival, which originated in Guanajuato where it is has been celebrated each Fall since 1972, brings together performers from across the globe and in recent years has extended its presence to other spots throughout the country. Puerto Peñasco has warmly welcomed the Cervantino over the past three years, and in 2011 was only one of two spots – along with Hermosillo – to host the event in Sonora.

Here is a run-down of many of the wonderful performances from this year’s Cervantino in Puerto Peñasco: