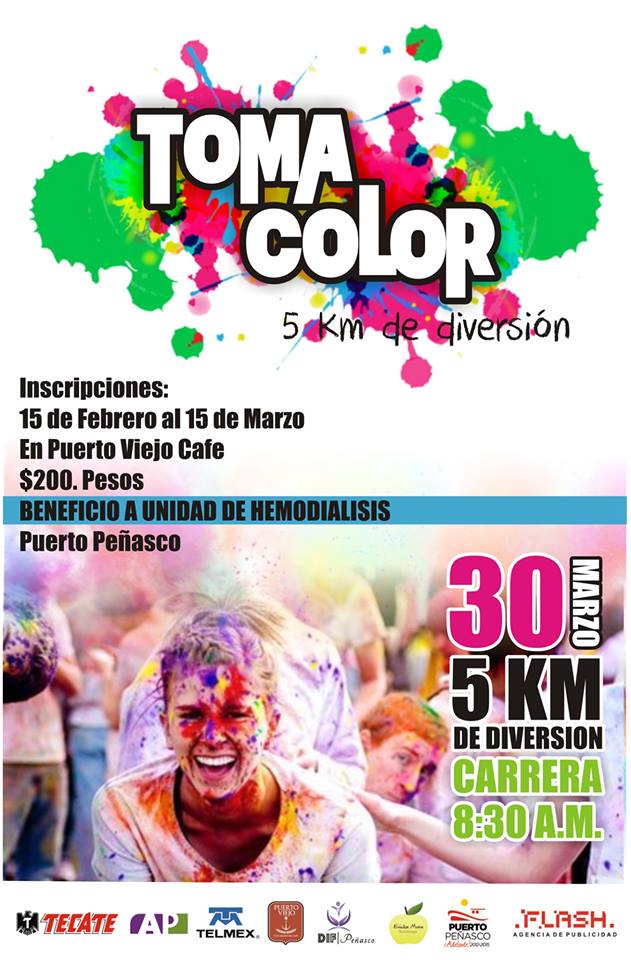 Preparations are ready for the “Toma Color” 5K race to take place this Sunday, March 30th, with the participation of more than 800 people (and just a slight change to the starting point). En Español: Listos para Toma Color

Luis Altamirano, one of the event organizers, explains registrations were closed after surpassing participant expectations.

“We surpassed expectations, there was a good response. Registration has closed it was better than we had hoped for,” he stated.

The young business entrepreneur indicated more than 800 people have registered for Sunday’s event, most of these being teams via the participation of businesses, gyms, cycling clubs, and many who have shown interest in the race since the beginning – including groups from Mexicali, Sonoyta, and Caborca.

He believes the positive response has to do with this being an innovative event for Puerto Peñasco, good results from this fun run in other cities, and above all interest in supporting the hemodialysis clinic, which will receive all the proceeds from registration entries.

The event organizer expressed they have had support from both DIF and the City throughout the entire process, which has helped with logistics. They also have support from Public Safety and the Red Cross, as well as that of their numerous sponsors.

He explained there will be water stations set up every kilometer, where people will also get a good helping of being doused in color.

“We´re still working on details for prizes; there will be prizes for the first team and we’re looking for something to benefit all participants, maybe a get together for everyone, and of course there will be a first prize, along with a prize for the oldest participant as we know entire families have registered,”  detailed Altamirano.

The finish line, and award ceremony, is set to take place at a special event in the Malecón where group photos will also be taken. The prizes and fiesta will be accompanied by the music of Party District and Agua de Coco.

Finally, on behalf of the organizing team, Luis Altamirano expressed their thanks to everyone who has shown interest to participate in this event.

“We’re grateful for people’s response and interest. We hope everyone has fun and takes advantage of the day, it’s a family event. We invite everyone down to the port (regardless if racing in the Run) for a fun Sunday afternoon with the family!”

*An extra lap around the Old Port will help make-up the full 5K, given the new starting point (had originally been set for Sam’s parking lot)

Wraps up at Malecón in the Old Port with music by Party District and Agua de Coco!

Come out for some color!