Ok, I’ll admit it. Though I’ve enjoyed bits of their music streaming out of Puerto Peñasco drinking holes for at least the past ten years, I have never been to one of the local Roger Clyne and the Peacemakers concerts. Gasp! I know, I know…   When some friends of ours had a little spot called “Around ‘d Corner” down in the Mirador, they anxiously looked forward to whenever the Peacemaker crowd would come to town – good people, good times, and infectious I-think-I-could-sip-a-little-more-tequila music!  Good thing Roger has his own tequila, Mexican Moonshine, which honors a song with the same name and first debuted in September, 2010.

I finally got my hands on a RCPM “Sip & Sample” CD last Fall, and once again ask how is it that I have not been singing along with faithful RCPM fans for years? This is my type of music, rock served up with a nod to the agave Gods or a fresh margarita on the rocks, no salt. The group, made up of Roger Clyne, guitarist Jim Dalton, drummer PH Naffah, and bassist Nick Scropos had me as soon as I heard the line “…with all due respect and deference, tequila is my preference” from the hit Jack vs. José on their 1999 album Honky Tonk. Who else can use deference like that? 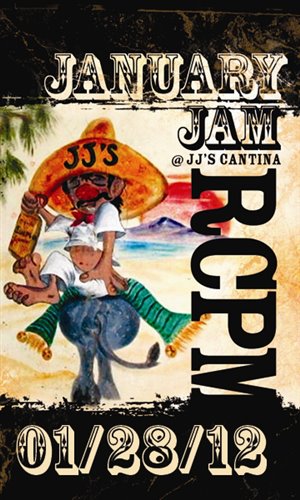 getting my first real taste of RCPM, I then joined the eager waiting game on various social networking sites to learn just when RCPM would be heading back to Rocky Point for January Jam @ JJ’s. There were hints and rumors everywhere, and then suddenly at the end of December…there it was…the announcement that 2012 January Jam @ JJ’s would be Jan. 28th, starting at sunset. Plus, this year Roger Clyne is doing a solo performance @ Wrecked at the Reef on Friday, Jan. 27 @ 9 p.m.  Dates for RCPM’s popular Circus Mexicus XXI have also been announced for June 9, 2012!! So, there you have it – I’m looking forward to my first Peacemakers concert and hearing more from their most recent album Unida Cantina since really, we all need a cantina. See you at JJ’s!

For more info on RCPM, Mexican Moonshine, concert dates, etc., be sure to visit:  http://www.azpeacemakers.com/

and for lunch… tortas!