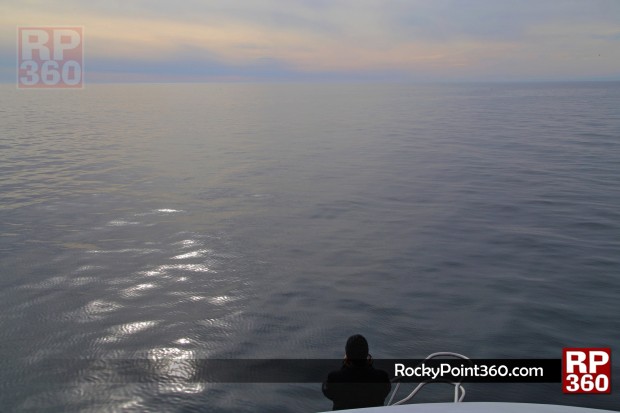 From approximately January through early April, when looking out from Puerto Peñasco over the Sea of Cortez one may find themselves spotting a spout or two during whale watching season. Last year, February sightings of whales nearby offered a wealth of spectacular photographs and stories of adventure.  We have learned sightings in the area are generally of fin whales and grey whales, though there may be some unexpected ones as well.  This season, we recall first hearing of a whale sighting back in November and more specifically around Rally time. Yet, chatter about whales in the area started to pick up with the New Year; a January 1st note coming out of Las Conchas exclaimed “Ballenas in Las Conchas!” This has been followed by an array of photo sharing opportunities, as well as the chance to board one of the local tourism boats with hopes to spot a whale of one’s own.

On Saturday, Jan. 4th, we were thrilled to get a call from EcoFun Rentals asking us if we’d like to try and spot some whales that afternoon. The water was smooth as we departed the docks and headed South of Las Conchas and then a bit West as the sun made its way across the sky. Two dolphins greeted us early on and then we came upon colonies of birds as we continued out further. Suddenly, excitement from on board pointed to large humps coming out of the water. First whale spotted! What was remarkable about spotting whales this time was actually the sound, not just the excited shouts from the boat but also the deep bursts of air coming from the sea.  We believe we spotted three different whales on this early January trip, and look forward to other whale adventures at sea to come!

While whale watching trips can’t actually promise you’ll spot a whale, there’s a good chance you’ll find some dolphins along the way and of course have a wonderful experience on the Sea of Cortez.

Check with these local companies to see about any upcoming trips:

EcoFun Rentals (www.ecofunrentals.com) will be offering a whale-watching tour on Jan. 7th at 2 p.m. departing from the city docks. This will be their last Jan. trip before annual maintenance, though they plan to be back in the water come early February with plenty of time left for possible whale sightings.