On Aug. 8th, Puerto Peñasco native José Carlos Villarreal struck Gold in the 1500 meters of the 2019 Pan American Games in Lima, Peru, becoming the first Mexican in history to take Gold at this distance at the games.

Villarreal covered the distance in 3 minutes 39.93 seconds as part of the third day of the track and field competition at the Videna Athletic Stadium, in the center of the Peruvian capital.

“I’m very happy to have won this race,” expressed Villareal, “It was through my own courage and confidence that I got it. Track & Field is rising in Mexico: a win in the 5000 (by Laura Galván) and the 1500 means a lot and I hope we can continue to give it our all”.

The Mexican runner added that his strategy was to stay with the best competitors in the first meters so they could not escape, then he saw he could beat them and put everything he had into the race to win.

Villarreal, who is 21 years old, is currently studying in the United States and has garnered the nickname ‘Speedy’. This was his first time racing for Mexico, though he didn’t want to delve too much into controversies surrounding the Mexican delegation after resources were cut for athletes and corruption scandals in the leadership.

“I cannot comment much on the local controversy, but hopefully Mexico supports their athletes”, he remarked.

Villarreal has the fourth-best mark in the continent this year with 3:37.22 minutes in the 1500 m. With permission obtained at the last minute, Villarreal made his way to Lima where, without anyone’s permission, he took the Gold!

The Puerto Peñasco native runs for the University of Arizona and disputed his last race of the season, as he did not qualify for a second round in the Doha International starting on September 28th. However, he expects to be in the Olympic Games of Tokyo-2020.

The summer Pan American have taken place every four years since 1951, with competition from North, South, and Central America. According to the official Lima 2019 Pan-Am Games website, this year’s games – which wrap up Aug. 11th -featured 6700 athletes participating in 39 sports and 61 disciplines. It is considered to be the second most important sports event in the Olympic circuit. 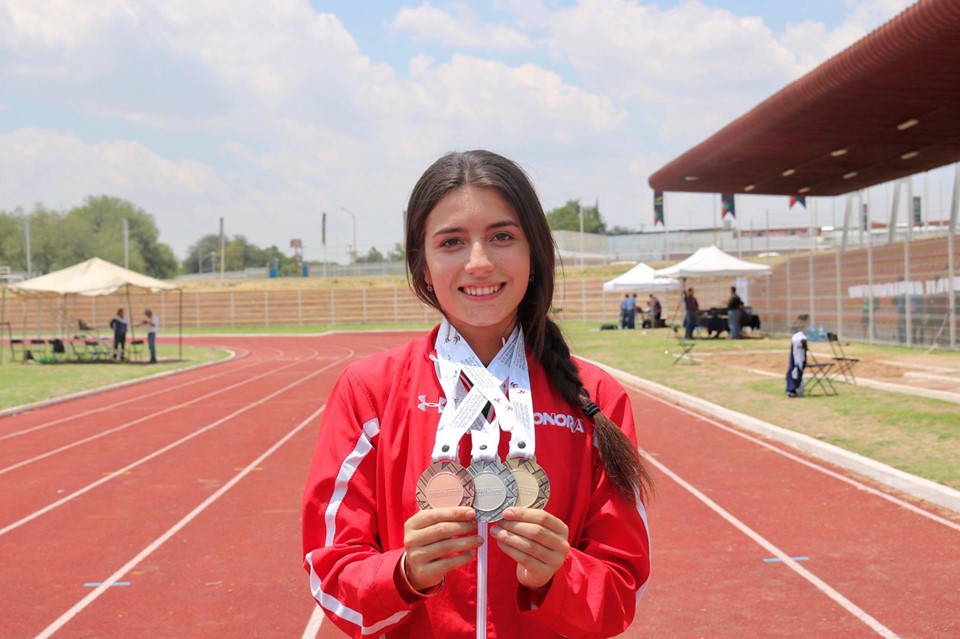 At the end of June, Frania Guadalupe Celaya Rodriguez made Puerto Peñasco proud once more by winning three medals in the 2019 National Counsel for Athletic Development in High Schools (CONADEMS) held in Aguascalientes.

The Puerto Peñasco native, who has been competing for over 6 years, has now finished high school and will be going on to college soon, preparing herself for college competitions while seeking a degree in Communication Studies.

José Adán Pino, Frania’s trainer since elementary school, stated Frania’s most recent medals are the result of hard work and dedication. He is confident that more young locals will keep making our city proud, just as Frania has, because there is a new generation of talented and dedicated athletes.