Puerto Peñasco is anticipating welcoming back visitors as of June 16th, marking Phase III of the city’s plan to revive the local economy during the present coronavirus pandemic.  With 8 confirmed coronavirus cases in the municipality since April 22nd, at least 6 recoveries and 1 death, Puerto Peñasco authorities have been adamant about keeping the city as healthy as possible, despite hot spots in other part of Sonora.  The ability to begin Phase III as planned will depend on how the city does under present Phase II guidelines, which expanded on appointment only services and take-out food to now include 40% capacity at restaurants, reduced number of people in stores, social gatherings of no more than 10 people, and continued use of masks while in public, among other steps.

Phase III in Puerto Peñasco will represent a gradual reopening of hotels and resorts (limited capacity), along with a possible % increase as to maximum permitted numbers for social gatherings and in local businesses/restaurants.  By June 16th, the hope in Puerto Peñasco is that Federal guidelines will also provide for reopening of beaches – even if under certain restrictions – and similarly that State Health authorities will have approved the reopening of pools.

As a tourist area, many local businesses, residents, and tourists alike are following developments in Cancun in the state of Quintana Roo, which has now categorized tourism and construction as essential businesses. To complement the Federal “risk alert map”, Quintana Roo has developed its own system of alerts, allowing for gradual reopening of hotels and some tourism services (at 15% to 30%) on June 8th, but beaches and public parks there also remain closed.

On the most recent Federal “risk stoplight map” issued on June 6th, the state of Sonora along with the rest of the country still fell under a red maximum-risk category. However, Deputy Health Secretary Hugo López-Gatell, who has been at the forefront of Mexico’s coronavirus updates, emphasized that “in each state, health authorities have the authority to identify social and economic realities, or rather the specific type of activities for each state,” using the federal risk-alert map as a general outline. This has led other states, such as Quintana Roo, to implement complementary measures and allowances to the stricter federal guidelines, particularly given the nuances in each state and municipality.

In expanding on how states are evaluated on the nation’s weekly “risk map”, Federal Health Promotion Office chief Dr. Ricardo Cortés Alcalá detailed each of the four indicators they look at are given an “alert setting” (red, orange, yellow, green), and if even one of those factors is red – or rather high-risk – then the Federal assessment for that State will be red. These factors include recent case trends (increase, decrease, or stable), hospital admission trends, hospital occupancy %, as well as positive Covid-19 syndrome rates (% of people testing positive). 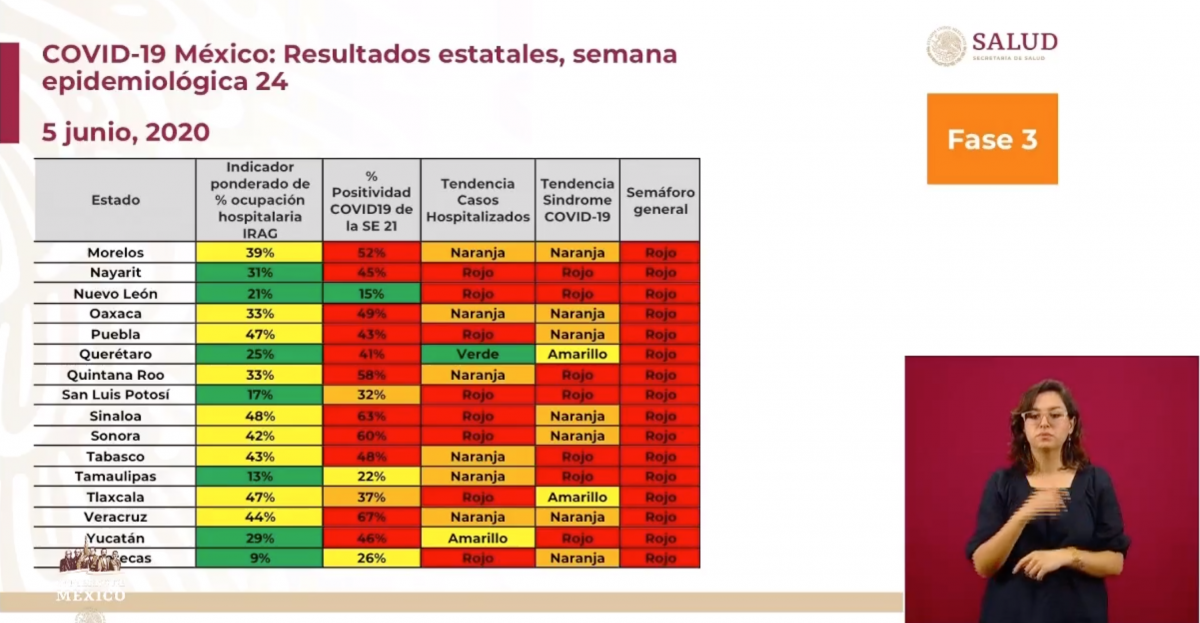 The Federal “risk-alert” map is part of Mexico’s New Normal and will be updated weekly and announced at the end of each week.  In the meantime, Puerto Peñasco is boldly wearing masks, blowing its 10 p.m. curfew siren, and longingly waiting for the day we can sink our toes in the sand …while keeping our eyes set on June 16th.