First in Sonora, and largest certified clean beach in the country.

(Puerto Peñasco, Sonora. March 2, 2017) Finally, following combined efforts of the Clean Beach Committee, businesses, along with hotels and resorts in this city, as well as several governmental offices, the tourist destination of Puerto Peñasco, Sonora was awarded Clean Beach certification for an extension of more than 1500 meters from Playa Bonita to Sandy Beach. This becomes the first certified clean beach in Sonora, as well as the largest beach with clean beach certification in the country.

Hector Vázquez del Mercado, president of the local Convention and Visitors Bureau (OCV), remarked 13 years of constant and strict sampling and monitoring by federal authorities per Mexican Norms culminated in certification, guaranteeing Puerto Peñasco’s beaches as apt and safe for recreational use.

Others present included Julio López Hernández, Emergency Attention and OCNO Basin Council Coordinator, Luis Alfonso Robles Contreras, Board President of the Upper Northwestern Basin, Jackeline Salazar of the State Water Commission, and several Mayors from across the State, in addition to representatives from the hotel, business, and tourism sectors, government officials, and invited guests. 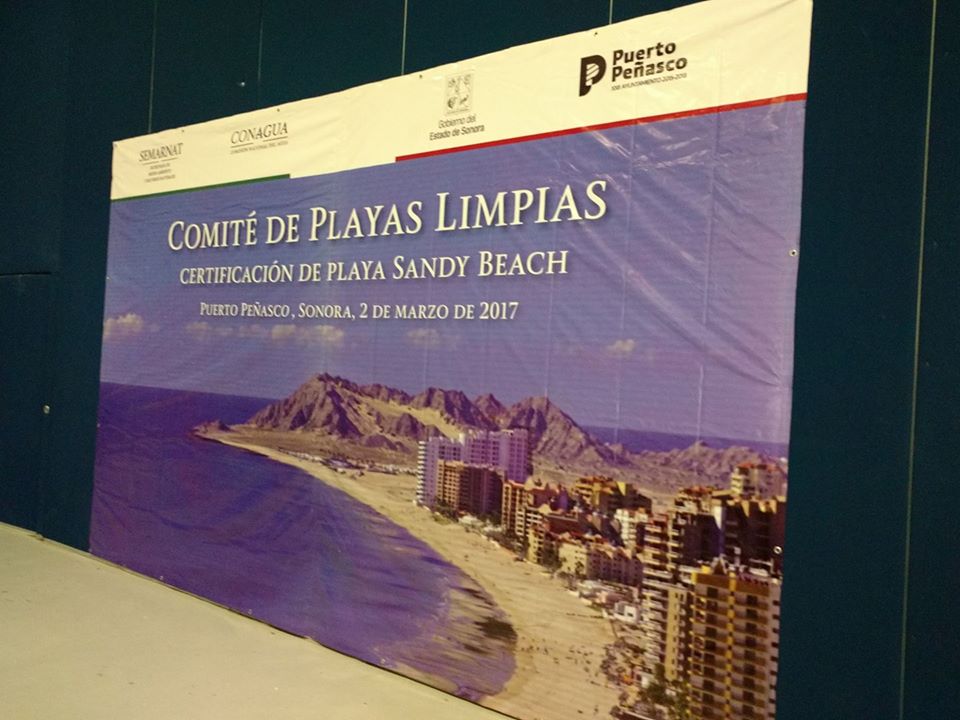 Vázquez del Mercado emphasized to obtain this important achievement, resort developments have been participating ardently by providing equipment, continuous work to clean up trash, signage, security and monitoring, as well as safeguarding swimmers.

“The intense promotion of Peñasco will not only continue,” he stressed, “but these efforts will be doubled so the fruit of our labor can be recognized, along with the responsible culture for preserving the environment of this beach destination, one free from trash and pollution, as well as the grand spirit of service and hospitality that distinguishes our tourism community.”

The Peñasco OCV President commented by making this certification public, they plan to project Puerto Peñasco even more so as both a national and international tourist destination.

“This confirms we are a clean, safe, and quality beach, which makes this destination even more attractive to potential tourism markets,” he detailed, “We are going to appreciate and conserve what we have achieved, as this recognition will not be the only or the last for this destination as we are going for more in all senses.”

Vázquez del Mercado believed it important to broaden a culture of healthy beaches, and that efforts be made to see this is not the only beach to achieve certification, but rather the entire community become actively involved in seeing that other heavily frequented beaches also participate in caring for recreational spaces.

Following the certification event, federal authorities presented corresponding flags to several tourist resorts located along the certified beach. These symbols were hung at each of the participating sites.