The stunning landscape of the Pinacate and Grand Desert of Altar Biosphere Reserve will form part of the background for the movie El Jardín, by Mexican Director Christian Cavazos, expected to come out in about two years.

Locations for the film also encompassed areas near the community of el Golfo de Santa Clara, which is where the desert ends and the Upper Gulf of California and Colorado River Delta Biosphere Reserve begins.  Part of the filming also took place at the former passenger bus station and restaurant “La Joyita”, located at KM 75 along the Sonoyta-San Luis Río Colorado federal highway.

Filming across the sand, in the Pinacate range, and under the eternal Sonoran sun, are all elements that filmmakers state provide a special magic to the film.  Actors in the film agreed the natural scenery gifted across northwestern Sonora was impressive, lending the perfect touch to the piece.

Actress Alexia Alexander detailed what she likes best about her job is travel and, above all, to take in the type of landscapes such as those within Sonora.

Approximately 130 people were involved in the filming process of El Jardín, produced and directed by Mexicans and expected to hit the big screen in 2021. Additional background for the movie included a simulated metal border wall between Mexico and the U.S., which spread out for several meters and was located just south of the actual division.

Authorities in the region note all film projects are welcome to take advantage of the natural sites in the area.  Still, they encourage filmmakers to do their part in caring for the environment and preservation of protected areas, such as the case of the ecological reserves located across the municipalities of San Luis Río Colorado, Plutarco Elías Calles (Sonoyta), and Puerto Peñasco.  According to official information, steps were taken to ensure the region’s natural environment was not harmed during filming. 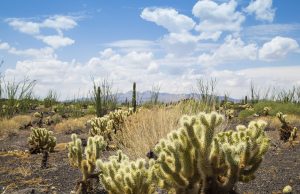 50 ships to launch from Puerto Peñasco in search of Hake