As temperatures warm, the bi-monthly Mermaid’s Arts Market is getting ready to wrap up their outdoor season at Shrimp Park on Saturday, May 17th. The Mermaids are set to move indoors for a show on June 7 and again around Labor Day, both to be held in the lobby of Sonoran Spa. Yet, three frequent local “Mermaids” have been on the move for quite a while, seeking out additional venues and opportunities to display their work while joining forces under the emblem “Artesanos en Movimiento” (Artisans in Movement).

Just days before the Mermaid & Pirate Fest back in April, blacksmith and sculptor Ricardo Monjaraz, candle maker Wendy Fregozo, and master recycle handcrafter Alma Yanes agreed to meet with me to share their thoughts, hopes, and plans for “Artesanos en Movimiento”. Over coffee, laughter, animated discussion on local issues, and brainstorming about ongoing cultural development and promotion in town, the artisans began to share their craft.

“We decided to form a group one day during a breakfast meeting,” explained Wendy.  “It seemed easy to make the group among just us three and so we made a private group on Facebook into order to share… ‘look, there’s this project, let’s go or can we go?’ … there, we can share given our different schedules. Alma and I both work at home and Ricardo has his workshop. The name Artesanos en Movimiento came from my daughter, Cinthia. I took it from there and, partly joking and partly serious, wrote down ‘a group made up of artisans from Puerto Peñasco, seeking to have our work known throughout the country and internationally, ¿por qué no – why not?’”

Wendy’s nervous laughter was contagious as she looked over at her fellow artisans, who were nodding their heads in agreement.

“In fact, each of has sold things that have gone to Canada, USA, etc.,” Ricardo explains.

Alma chimes up, “Yesterday, some people from the US called me and they wanted us to bring things over to show them. My husband went, and it went well, gracias a Dios.” 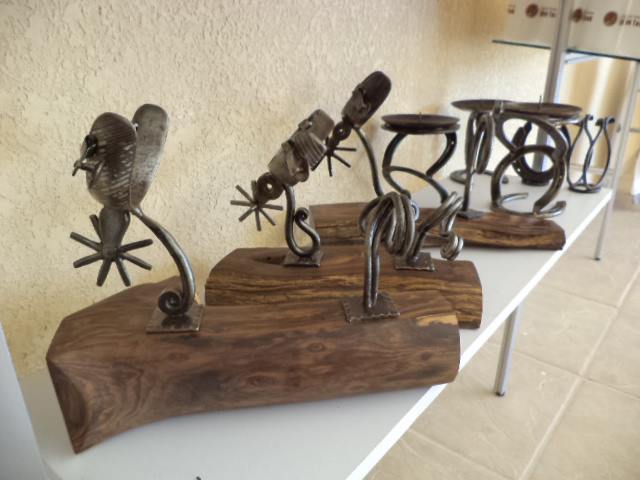 Ricardo, whose iron work often reflects his rock-n-roll spirit and yet poetic nature, goes on, “More than anything, we would all be at the same events and even though we weren’t a group we would all check to see what was missing. We began talking more and helping each other out and then, in addition to the friendship, we reached the point of gaining that trust in each other.  Personally, I have seen many groups come together and it sounds great, beautiful, suave, but once they start “let’s go here, or let’s go there” only half of the people come or just a few. Between the three of us, we know each other and trust each other. If we say yes, it’s because we’re going. If we can’t, well we can’t.”

“But you still have your separate booths?” I ask.

All three nod, and Wendy adds, “respecting each of our areas.”

I inquire further, “Did you know each other well before?

A resounding yes! Wendy explains, “Alma and I more so.”

Ricardo jumps in, “I’m the newest. I remember la maestra (Alma) when we would go to different projects.”

“In the Cervantino,” Alma clarifies.

“Yeah, that’s right, in the Cervantino about 3 or 4 years ago…and then I met Wendy at Mermaid’s (Market),” Ricardo adds.

Wendy also notes, “Alma invited me; [Ricardo] was participating, invited Alma and then she invited me. None of us have our own business to display our things”

Alma, which in English means “soul”, and whose mere name describes her generally quiet yet determined composure, explains, “We don’t have a gallery, we’d like to, but it takes… (she makes an internationally recognized symbol for $).”

Ricardo speaks up, “If we need to go to an event, we figure out how we can go together and take things as a group, because if we didn’t it wouldn’t be a group. For example, if I want to go [to art shows] in Mexicali or to Tijuanarte, I have to see how much the trip would cost, which is a lot. Between three, even though we’re squeezed, it’s cheaper and we can do the trip as we share expenses, fuel, etc.”

“What local shows have been good?” I ask, adding, “I know you’ve been very faithful to the Mermaid’s Market.”

“Mermaid’s!” all three agree. Wendy adds, “We have a lot of trust in Russ.” [Russ and Naomi Black founded the Mermaid’s Market in 2013, and Naomi’s work can also be found at each Mermaid extravaganza]

Ricardo remembers, “I also went to the earlier Farmers Market”

Wendy adds, “Top Chef. Well, Ricardo did better there last year….and Art in the Park (in Las Conchas each November), but our compañera didn’t do so well.”

Alma sits up abruptly on her seat and exclaims, “The ONLY time I didn’t sell was there in Las Conchas…the ONLY time…!”

“How did you do at Top Chef?” I inquire, remembering back to February when I watched numerous people walking across the plaza with their purchases of colorful recycled tires transformed into parrots and turtles.

Ricardo chuckles, “Well, we’ve all left the Mermaid’s in 0.” 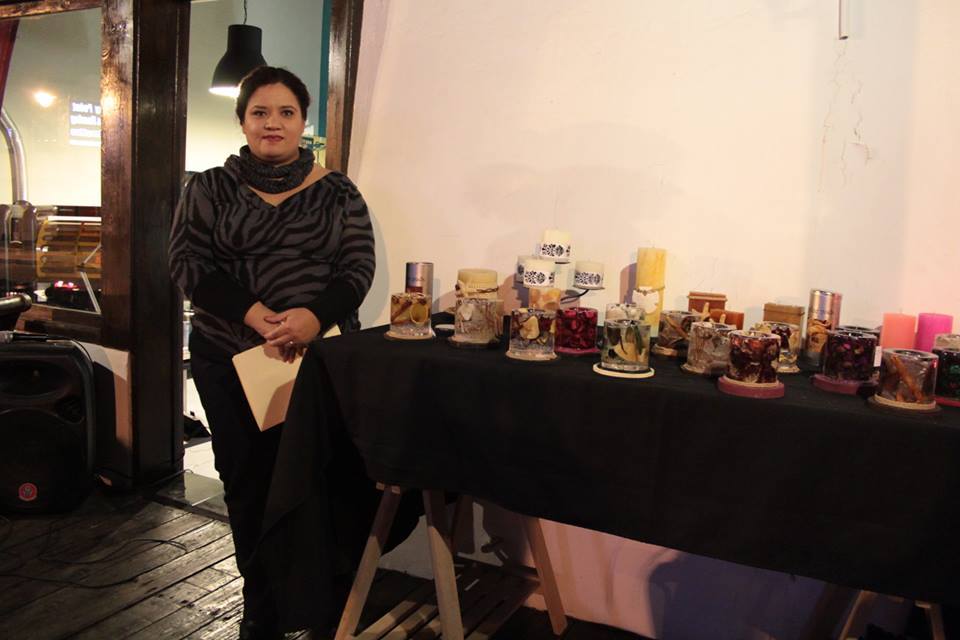 “But,” Wendy thoughtfully adds, “though we’ve gone away in 0 economically, we go away 100% emotionally. We spend the day in the park, see each other, chat…it’s fine. One doesn’t always have to do well economically, though it doesn’t hurt.”

Wendy’s laughter is joined by the other two artisans and then Alma reminds us all, “But yes, there in Las Conchas is the only time I didn’t sell ANYTHING.”  Wendy chides her on, “But we had a good time, no?”

Wondering the obvious, I ask, “Would you do it again?”

“Yes!” Alma bursts out. “I always go [to any event] to help support, but to support. Just because I don’t sell anything, doesn’t mean I’m not going to go. I go because I go, so people can see my work.”

“What the three of us have in common is that we are artists who create with our hands,” Wendy goes into detail. “We want everyone to see our work; our clients don’t know what we go through to be there but we want them to go away happy with our items, that’s the truth. Artesanos en Movimiento consists of three people with completely different personalities.”

“Are you going to continue to go to local expos, markets, or other events?”

Alma speaks up, “Yes! Even if I don’t sell anything, I’ll be there, God willing!”

“Out of curiosity,” I change the conversation a little, “what do you think in general about the cultural environment in Puerto Peñasco?”

Wendy adds, “We need to promote more interest in culture among children and the community.”

Ricardo goes on, “All of us use Facebook but many people don’t…if we really think about it. If we didn’t have Facebook we wouldn’t find out about hardly anything that goes on.”

“What Ricardo means is there’s no visual publicity, billboards…he’s the “trouble-maker” in the group,” teases Wendy.

“What plans are there for Artesanos en Movimiento?” I ask as we begin to wrap up.

Wendy, who seems to be the jovial spokesperson for the group, concludes, “That we get invited to many places…that there be lots of movement!  What we’ve concluded from all we’ve gone through is we’re already looking at dates throughout the year and planning a bit more, with various months of preparation.”