Singers Mariana Seoane and Julio Camejo visited Puerto Peñasco last week to present their music video “De Rodillas te Pido”, bringing together regional press from across northwestern Mexico and Arizona at an event sponsored in conjunction with the local Convention and Visitors Bureau.

The Convention Center at Las Palomas Beach & Golf Resort was the setting where, after a stint on the red carpet, Mariana Seoane along with the Cuban born actor/singer Julio Camejo and video producer Ernesto Fundora presented their clip of Pepe Sosa’s song “De Rodillas te Pido” (I beg you on my knees). The artists had selected Puerto Peñasco as a strategic point to launch their video in this part of the country, as well as into Arizona. 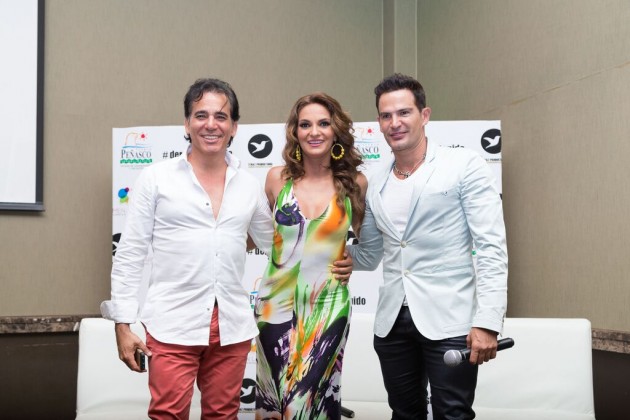 After gathered press watched the video, the singers responded to questions from various media outlets including those of TV Azteca, Televisa, Telemundo, and El Imparcial, among other companies offering national coverage both locally and abroad. A lively cocktail evening ensued after the press conference, where Seoane and Camejo also took the opportunity to share the song live from the stage.

Seoane expressed thanks for the invitation to come to Puerto Peñasco, where in fact she’d like to return for a Project in the future. She also reminisced about her first visit to Puerto Peñasco about 15 years ago.

“I love Puerto Peñasco, its people, and how we’ve been treated. I’ve had the chance to go to the beach and take photos with anyone who would ask; hopefully we can return,” shared Seoane.

Julio Camejo, who also served as executive producer of the joint video, remarked the launch of this video was made possible through solely independent investment and it showcases cultural elements of Veracruz and various locations while also promotes different corners of Mexico.

The singer proclaimed what he liked best about Puerto Peñasco is its desert and the grandness of its landscapes.

“I was also here a number of years ago and I love it; along our trip by road (after flying to Mexicali) we stopped in various spots to take pictures; it’s all up on our Facebook sites, Instagram and Twitter so all can see,” explained Camejo.

Filming of the videoclip, directed by Cuban producer Ernesto Fundora, took about three days and is currently being promoted across the country.