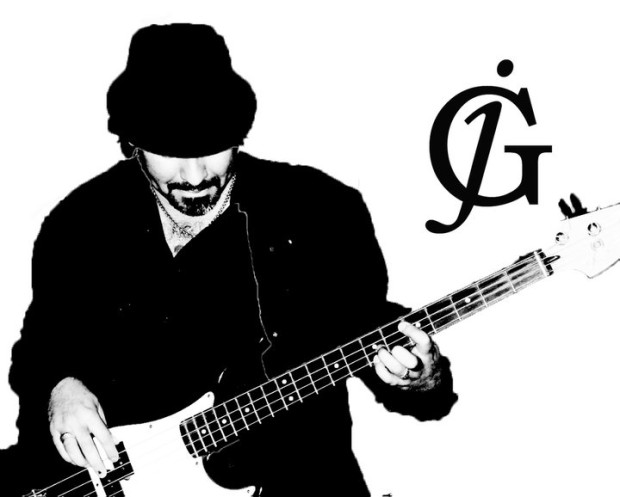 Approximately ten years ago, singer/songwriter/poet/musician Jesse Gerardo strummed his way onto the beaches of Puerto Peñasco, quickly making a name for himself around town through a fusion style of jazz, salsa, mariachi, and Latin beats that soon had people on their feet and following him from venue to venue. The troubadour, born Jesús Manuel López Gerardo in Mazatlán though who grew up most of his life in Nogales, rapidly became known on a local level by just his first name – surely a marker of his recognized status – though his albums proclaim he is “world un-renowned.” Jesse.

On October 12th, Jesse returns to his hometown of Nogales to celebrate his 25th Anniversary as a musician. The presentation, which will take place at Teatro Auditorio de Nogales, will include a compilation of songs from Jesse’s eight albums as well as the presentation of his first published book Músico, Poeta, y Loco (Musician, Poet, and Fool). In an August interview with the Nogales paper Nuevo Día, Jesse detailed the evening will also include invited friends and singers, interpreting the various genres of Jesse’s journey in “musicalizing literature.”

Jesse and I crossed paths earlier this summer at an event where, following a brief exchange of acknowledging welcome nods, his CD “Huele Amaramor” suddenly appeared by my side. A gift from the performer, I was told. The name itself gave me insight into Jesse’s mysterious way with words; was it “Huele a mar, amor” (It smells like the sea, my love) or “Huele Amar, Amor” (Dear, love stinks [with a bit of literary license]) or perhaps with a quick switch of a letter it could have been “Duele Amar, Amor” (Dear, love hurts)? I’ll leave the interpretation to each listener’s liking, with lyrics such as “Today I forgot I forgot you.” Huele Amaramor is inspired by the Sea of Cortez, also known as Mar Bermejo (crimson/russet Sea), with jazz seemingly fused with tropical beats, bohemian guitar and funk.

Finding a time to meet up with Jesse proved to be more challenging than deciphering the poetic license woven throughout his music. Between our busy schedules, trips to Nogales and Hermosillo for presentations, and remastering of the Anniversary album, Jesse and I did well if we were able to exchange a few words over Facebook. Along with the sharing of videos and articles promoting the upcoming Anniversary night in Nogales, Jesse explained over social media “My book is ready…I’d like to talk about that.” 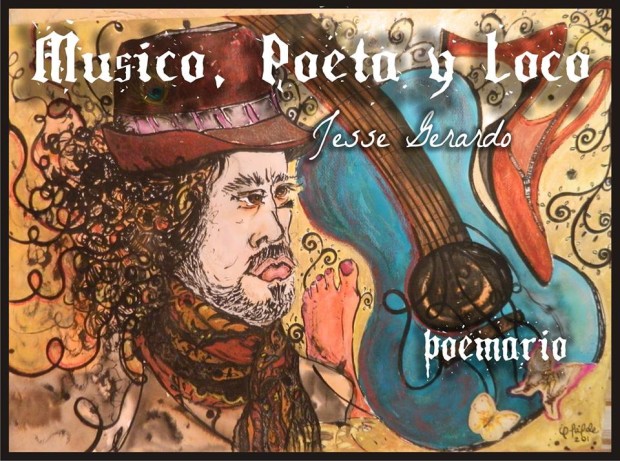 In the prologue to Músico, Poeta, y Loco, Jesse confesses he still does not know if he is a poet who sets music to his lines, or a musician that lends poetic meaning to his melodies – perhaps that is part of the loco. Músico, Poeta, y Loco is divided into three sections, each alluding to the book’s title:

Jesse: Actually, this is not my first book. I have written three others before but never had them published, but they’re there. One is called “Loose Autumn Leaves”, I have another book that is a poetic novel, biographical, called “Confessional”, and I have written other things. In addition, I collaborate with different cultural forms of the press. So, people know me more in Nogales and Hermosillo for writing poetry and I have participated in some contests… Yet, for the anniversary, Julio Cesar Saramiento, who is a journalist/writer and one of my teachers, told me, “Why don’t you put out your first book?” and motivated me to do so, “Come on,” he urged, “I’ll help you have it printed where my books are printed, and we’ll do a selection from your work.” That’s how the idea came about, suddenly.

Jesse: Exactly. We had to consider the title and what we were going to call it, because really we pulled the book together over just three days.  I already had a lot of material and it was just a question of selection. Emilse Valencia, who wrote the prologue for the book and who lives in Hermosillo, told me “I don’t know if you’re more of a musician or poet. I don’t know if you’re a musician who puts poetry to your music, or a poet that adds music, or vice versa.” That’s where the idea comes from, she went on, “…or you’re just a fool and don’t know what you are…there are two personalities, Jesse Gerardo and Jesus Manuel…sometimes you’re dressed as Jesse Gerardo for the stage, but when you’re here, alone, you’re more Jesús Manuel.”

Jesse is an artistic name that came about, it’s word play.

RP360: I read in various interviews that your first album got inspiration from Psalms, in the Bible; honestly, that wasn’t really the impression I had of you. I didn’t know you had a religious side, or that of spirituality or a certain faith. 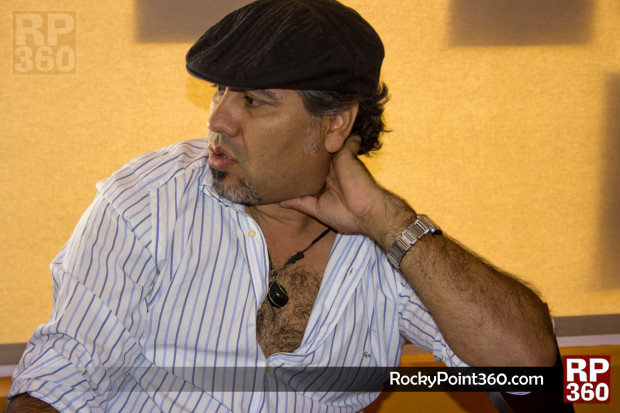 Jesse:  I began in a Christian church; that’s where I learned to play different instruments, I started playing drums, then bass, piano, guitar, and to sing. That’s where I did my first album, named “Ábreme el cerebro” (Open my Mind) and the group was called ABREK.  I began to travel, in fact thanks to that project I came to Puerto Peñasco in ’89, and then I went to Tijuana to sing, and on to Mexicali and Cd. Juarez, and many parts with that project. After that first project, a number of years went by and I did another album, one with protest music that had nothing to do with the church. That one was “Nos está rompiendo la madre patria” (They are ruining the motherland). It was in protest against the country; at that time Vicente Fox was doing his campaigning and there were a lot of changes in the country. That production was full of poetry talking about the inconformity we were living through as a country at that time. This duality is what the woman who did the prologue for the book talks about; she says, “Jesse Gerardo is the artist, the one who sings on stage, and Jesús Manuel is the spiritual one, the part that is measured…who always talks about God and spirituality.”

RP360:  And there’s no conflict between the two personalities?

As an artist, one imprints their feelings in the music and if you separate the songs you’ll realize there are two personalities. The prologue in the book talks about this, finding two aspects and separating them. And that’s where there’s a craziness as in the end you don’t really know who you are.

Jesse: I believe you are going to see a lot of things because during this most recent stage of my artistic life, I am maturing in many areas, putting things into place and seeking priorities. I believe this anniversary is going to be important because I am going to really define a more solid path. I’m not going to go around looking for a place to play, or knocking on doors – I already did a lot of that – I believe I am going to define a calmer route.

RP360: Does that route stay here in Peñasco?

Jesse: Yes. Right now in Puerto Peñasco I have found a place where I can write, where I can compose, and where I can be inspired. It relaxes me, and does Jesús Manuel well at this stage. I am laying the foundation for something that may be different for my career, more as a composer not as a singer/songwriter, more of a writer, more poetry. I believe I’m going to head more in that direction…and continue singing.

Our conversation went on with Jesse describing the various artists from Puerto Peñasco, Hermosillo, Nogales, and Tucson who will be accompanying him at the 25th Anniversary event. Artists to accompany Jesse for the celebration include Randy Vega, José Arturo Carranza, and Josúe Ellis from Puerto Peñasco as well as Omar Millán and his group from Hermosillo, various artists from Nogales such as the composer/singer Maria Jesús and troubadour Marco Antonio Anaya, from Tucson a young composer named Tito Fier, and Adrian Bonilla from Nogales, Arizona, among others.

The performance, idea for which came about over a cup of coffee with friends during a visit to Nogales earlier this year, will celebrate Jesse’s first book of poems and of course the first 25 years of his musical journey. 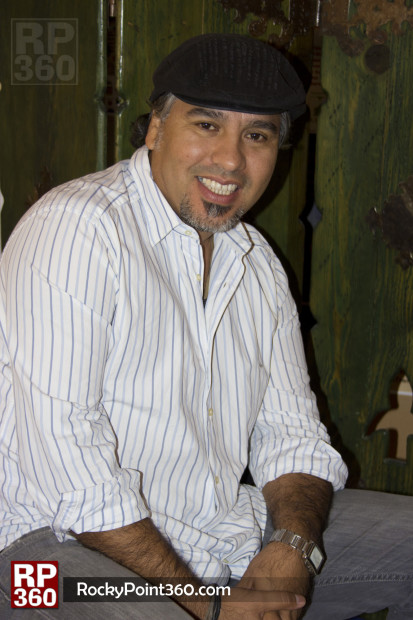 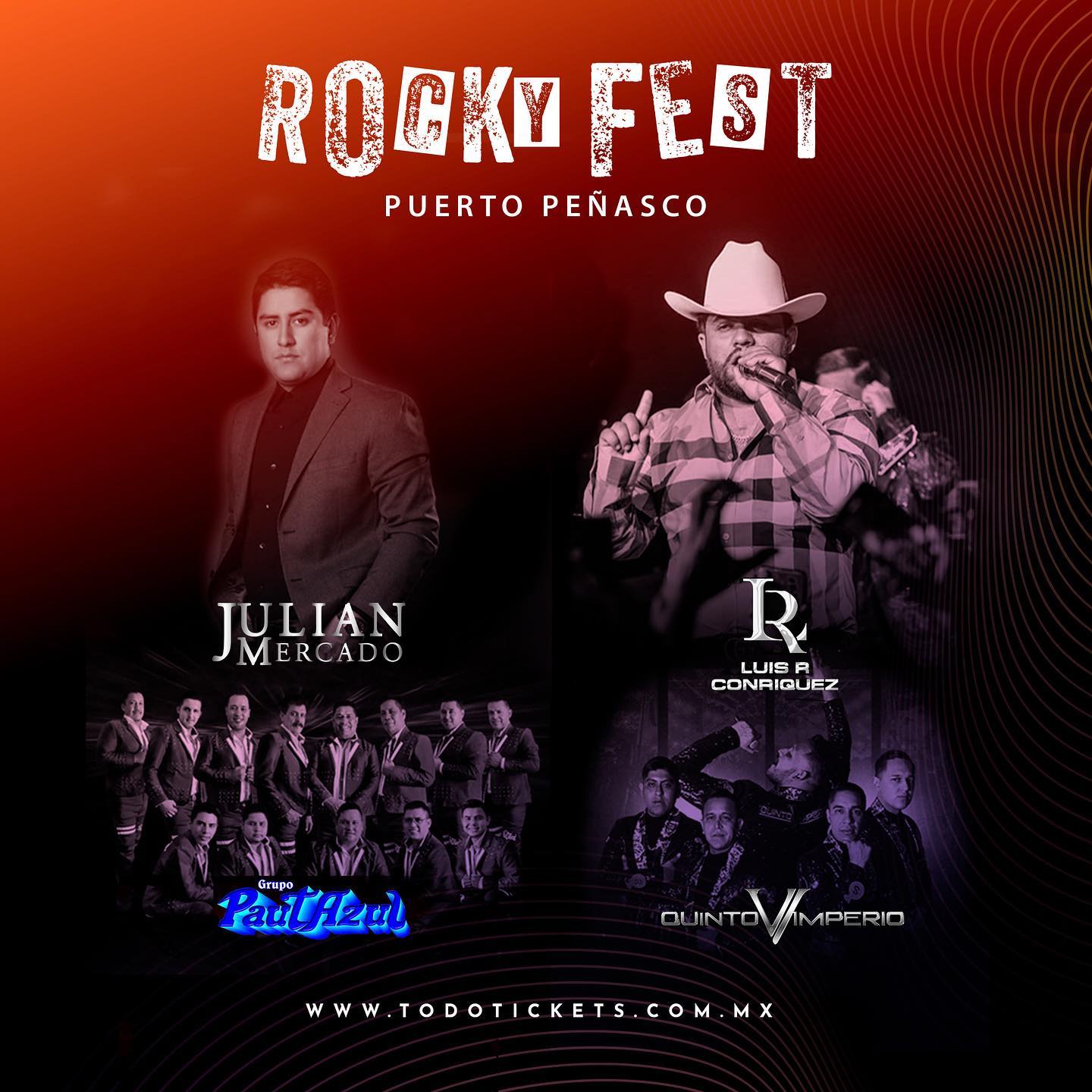