We’ve had a busy week over at Rocky Point 360 as we’re moving into a new office! After nearly two years at our spot in Plaza Fremont, we’ve moved along the boulevard and found a new casa next to Plaza del Camarón in the relatively new Plaza Pelicano (or, as more commonly known, where Yummi Salads is).  We’ll be steps away from City Hall and the local Chamber of Commerce (CANACO) offices, and we’re also glad to announce the Puerto Peñasco Convention and Visitors Bureau Office (OCV) is also now in Plaza Pelicanos (you can see their colorful windows from Shrimp Park).   We’re on the second floor, so come by and say hi when you get a chance!

In the meantime, let’s rundown the weekend and take a look at upcoming events for the Spring.

It’s a relatively quiet weekend in town event wise, though local tour boats are more than active these days with eager folk headed out to sea hoping to glimpse a whale or two along the whale. Pictures from this year’s whale watching season have been simply spectacular! Tours have captured incredible moments of whales, dolphins, sea lions, and of course birds that have flocked to the area to dine on swarms of sardines (we hope to have more on this phenomenon shortly).

10 a.m. Plaza a la Madre – A 3rd Family Bike Day will be departing around 10 a.m. (registration starts at 9 a.m.) with cyclists making their way down Blvd. Juarez to the Malecón and back through the Mirador until returning to the starting point.

207 miles cyclists arrival – sometime early to mid-afternoon we hear those participating in the 207 miles bike ride from Peoria to Puerto Peñasco will be reaching their final destination at the 1Mission camp outside of town. 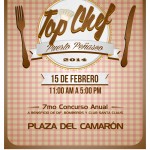 There’s still a chance to get your spot, or donate items for the raffle! Contact Rosie Glover for details, raffle donations, and to reserve a space:  rosie@proalliance.com.mx  cel: 638 386 9081 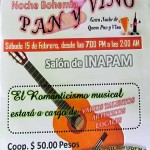 Where is Salon de INAPAM?  From Benito Juarez take the street on the South side of the baseball stadium (Adolfo Lopez Mateos) head East 5 blocks and turn right, and it is just after you turn the corner. 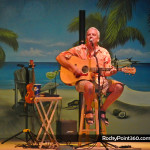 5 p.m. Mark Mulligan’s trop rock is heading back to town for an evening of music at Caribbean Parrot! Sip a margie, imagine yourself in a hammock, and sit back to wind out the Valentine’s Day weekend. 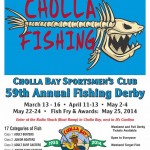 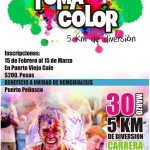 Looking for upcoming events in Rocky Point?  Check out our Event Calendar!   If you have information you’d like to add, please let us know at info@rockypoint360.com   or cell:  638 380 8849, or from the US: 480-282-4226   For weekend rundown announcements, please get them to us one week in advance (preferably)…though the earlier the better!  Don’t forget to subscribe to RockyPoint360.com to get all our articles and announcements and/or Like us on Facebook at Rocky Point 360.   Remember to swing by our new digs to say hi, or we’ll meet you downstairs for coffee!