While carefully navigating over the roads from Phoenix to Puerto Peñasco, it is common to come across sleek white vans – often with a travel trailer in tow – brandishing an invitation to all to “Head Out to Rocky Point.” Pinning down a time to sit and chat with Head Out owners Lynelle (formally Mitschele) and her husband Mike Jarvinen proved to be a bit more complicated as they are, as you may have guessed, on the road quite a bit. On a rare Friday when both of them were in town together and had a “day-off” between runs, I had a chance to meet up with them in their comfortable studio condo in the Old Port.

Lynelle and Mike enthusiastically emphasized their service is “not just a ride,” as they take pride in promoting Rocky Point in general and over their 7 years of operation have had people place their trust in them to transport family members (from 5 to 95) back and forth across the border. 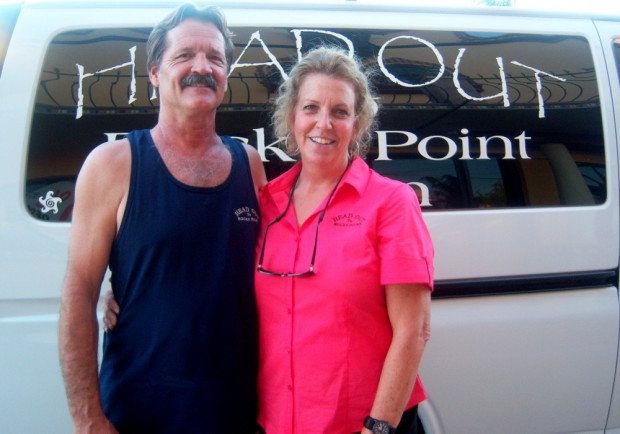 The well-versed traveling couple, who consider Rocky Point to truly be their 2nd home, provide passengers with a good lay of the land when visiting the area and take that extra step to make sure people make it safely to their final destination. Mike mentioned he has even spent time wandering through the various sections of Las Conchas until passengers are able to identify their weekend getaways with something a bit more detailed than “oh, it’s the white house on the beach with a dolphin on it….or a palm tree.”

Lynelle added their door-to-door service provides passengers with an informational packet on Rocky Point that includes a copy of the Rocky Point Times, pamphlets or cards from various local establishments and businesses, a city map with the couple’s own recommendations and tips for fun in town, and of course each individual’s pick-up time for the drive back North. Plus, she continues, they take time to talk with passengers about what to expect along the route (safety checkpoints, going through the customs office when returning to the US, etc.), which helps provide extra comfort and assurance to travelers. While the vans are not fully handicapped accessible, they are able to carefully transport devices including wheelchairs and scooters in their tow trailers after assisting individuals into their vans.

Lynelle and Mike began Head Out in Phoenix 7 years ago when, after addressing numerous questions about shuttle services to the area when working at Rocky Point Reservations in Phoenix, Lynelle decided it was time to get a van and go about putting together such a service. Lynelle had been coming down to Rocky Point with friends since 1967, and after introducing Mike to Rocky Point, the two began Head Out with just one 15 passenger van, which now by the way has 500,000 miles on it (yes, 500,000!). It was not long before the two acquired a second van, and each began their path together in a second marriage after Mike popped the question to Lynelle from right atop their Rocky Point roof with its astounding sunset views! The second van now has 300,000 miles on it…and Mike and Lynelle have shared many miles and many stories between them.

Currently, Head Out owns the two well-traveled vans and frequently uses a third – driven by their part-time driver Dave – and they have even brought down 4 or 5 vans at a time to accommodate larger groups. Head Out explains they have all the permits, licenses, and insurance in order to pick people up directly from the Phoenix Sky Harbor Airport (which represents about 80% of their business currently), as well as to provide door-to-door service throughout the Phoenix metropolitan area (*extra fee may be applied depending on part of region). 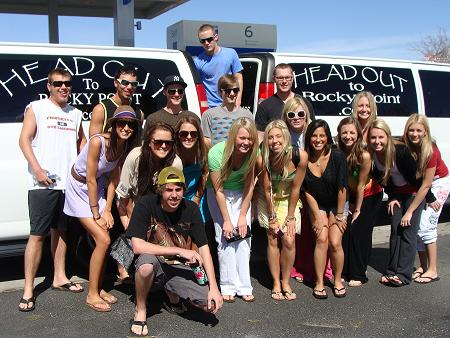 Among the many memorable trips to Rocky Point, Lynelle and Mike highlight the time they brought down an extended New Zealand family of 50 for a family reunion, or the fun-filled trips of fans streaming in for Roger Clyne and the Peacemakers performances, trips with cancer patients who for a time came for various treatments at the Sandy Beach Medical Center, Spring Breakers, wedding parties, numerous visitors to Mayan Palace, and now from June through October scores of divers making their way to the area for diving trips on Rocio del Mar. Each Saturday, Mike and Lynelle explain, they pick up about 20 divers here in Rocky Point and make their way up to the airport in Phoenix before picking up a new crowd and driving back, delivering them and all their gear for another diving excursion!

What Lynelle enjoys the most about the service that she and Mike offer through Head Out is the chance to meet people from all over the world, while sharing with each and every one her love for Puerto Peñasco. On a recent trip back up to the states, she chuckles, “the women on board and I were like old girlfriends chatting all the way up.” Indeed, this is not just a ride – it’s a peek into the extended spirit, passion for, and enjoyment of Rocky Point. 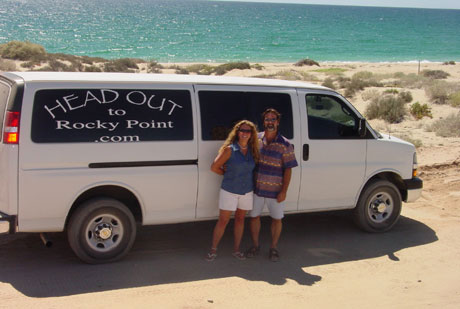 Recommendations for anyone looking to book with Head Out?  Advanced booking (at least a month) is preferred, both for groups and individuals (One-way and solo travelers based on availability). Reservations can be done through their contact sheet online at:  www.headouttorockypoint.com   or by phone: 602-971-0166 or Toll-Free: 866-443-2368 Head Out is also on Facebook, though reservations still need to be done through their site or by phone.  Urgent messages (checking on last minute availability, etc.): Please CALL rather than email! Also, be sure to leave a detailed message and they will call back as soon as they can. (Before departing Phoenix or Puerto Peñasco, Mike and Lynelle always check messages.)