I am the son of a fisherman, a family of fishermen, that is me. Of the sand…a narrator of the desert and sea. I write themes that have not been written about this place.  – Guillermo Munro 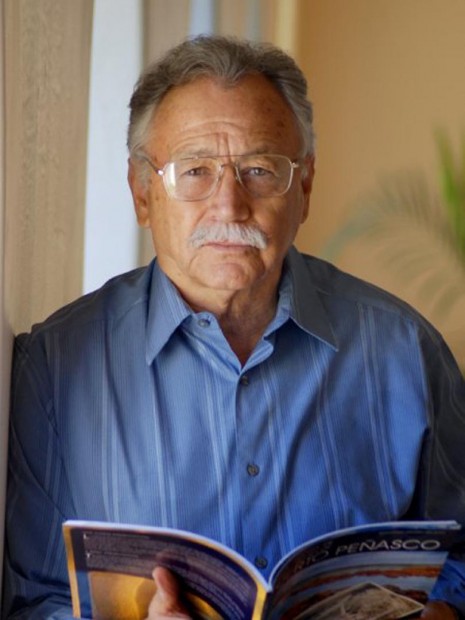 With great joy and pleasure the community of Puerto Peñasco received word that the city’s most prolific writer was named Emeritus Creator 2012-2013 by the Sonora State Fund for Culture and the Arts (FECAS), through the Sonoran Cultural Institute, award. The award, consisting of $84,000 pesos, as well as official recognition, will be presented to Don Memo in February.

More than two years ago, in 2010, from June 1st through the 30th, homage was paid to the writer Guillermo Muno Palacio in Puerto Peñasco. At the event, 350 artists and local talent participated the majority of whom were either native to or residents of Puerto Peñasco. This tribute, entitled “Airs of Identity,” was held as part of the 15th anniversary of the Peñasco del Sol hotel. The Primera Toma Film Club served as general producer, as well as in the design of everything for this magnanimous event made up of more than one hundred activities (colloquia, workshops, music festivals, conferences, book presentations, recitals, concerts, etc.) and an art collective of 30 artists with 200 works of art displayed in the hotel lobby.

Guillermo Munro awakens tremendous emotions, the pride people feel for him is immense; we could sense that throughout the month, but even more so on the particular day on which he was honored when many government and civil organizations, as well as individuals, demonstrated their pride through the presentation of dozens of recognitions and words filled with emotions. His family and community were witnesses and accomplices to everything. Such recognition has been earned by a man of his standing who has known how to draw out life, work arduously in all senses, shine in his own star, polish his steps, and literally take the bull by the horns.

Don Memo’s father was Guillermo Munro Fourcade and his mother María Palacio Madueño (1910-1973), both born in Guaymas; together they had nine children: Victoria (the eldest), followed by Guillermina, Héctor, Lidia, Olga, Francisca, Guillermo, René and Ernesto. Don Memo’s infancy took place between Bahía Kino, Puerto Libertad and Puerto Peñasco. He has gratifying memories and outstanding visual symbology; this landscape resides in his mind, the forms, and artifacts prevalent at that time dedicated to fishing and survival. He confirms that the preferred persons who guided his life were his own parents, of whom he describes marvels, along with his siblings.

As fate would have it, Guillermo Munro was born in Hermosillo in 1943; the rest of his infancy took place between Sonoran ports and bays. His youth stretches across California and Arizona, as well as border areas as is characteristically that of Sonoyta; this is why his distinctive mind collected stories that would then turn into five already published stories: “Las voces vienen del mar” (The voices come from the sea, 1992) – Best Novel of the Year by ISC; “Los sufrimientos de Puerto Esperanza” (The sufferings of Puerto Esperanza, 1995) – Honorable Mention by the ISC; “El Camino del Diablo” (The Devil’s Way, 1997); “No me da miedo morir” (I am not afraid to die, 2003); and “Regreso a Puerto Esperanza” (Return to Puerto Esperanza, 2006. In addition, he has published books including “Breve Historia de Puerto Peñasco” (A brief history of Puerto Peñasco, 2007) and “La ruta de los caídos” (The route of the fallen, 2012), the latter of which was recently presented at the Puerto Peñasco Book Fair, as well as screenplays: “El camino del diablo,” “No me da miedo morir,” “Halloween Night,” “El Pinacate,” “Shattered,” “Mujeres Ostioneras,” “Bany el desastroso,” and “La maldición del tesorero,” among others. He is also the founder and director of the magazine “Nuestra Gente” (48 published volumes), dedicated to rescuing the chronicles, legends and stories of the region.

Of his most recent unedited novel, Don Memo tells us, “This novel is entitled “100 brave men.” It is set between 1846 and 1860, located in Upper California and Sonora. It is a historic novel, or historic thriller, …something like the novel “El nombre de la Rosa” (by Humberto Eco).  Centered on two characters: Professor J.A. Balrui, 63, and a young journalist apprentice, 23, the story mentions principal events that took place in these two places: the U.S. – Mexico war, the invasions of Sonora, etc.” For this story Munro has worked extensively on historical research, he has read more than 40 historical books from libraries principally in California and Arizona. Currently, the novel is already finished and is in the contest phase and undergoing editorial proposals. 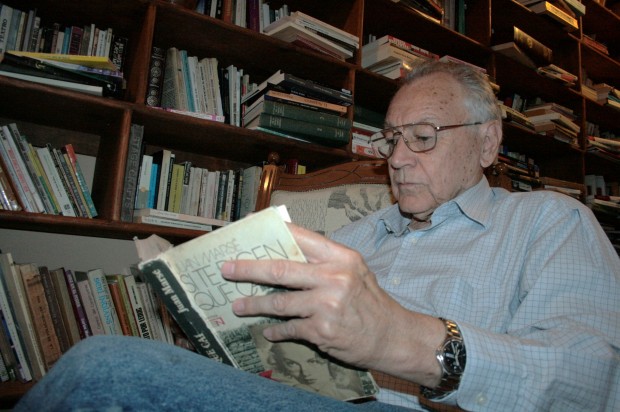 “Writing literature when you have many responsibilities to fulfill, things to do and payments to make, has always been difficult. This novel on which I am working, and which I consider to be my most important work, has been a chore, though not creatively. Rather, when I began to draw up the plan (January of 2009), I was struck with an embolism (from behind as do traitors and conspiring cowards) that left me blind and it took me nearly a year to recover 95%.  The aftermath now is when I look at something fixedly for a long time (with a person in front of me speaking, for example) they begin to disintegrate: more white spots form; I cannot read many lines on the computer or when reading books at times I lose concentration and, in both cases, I get dizzy, and there are always lines of white light, zigzagging snakes, dots.”

“Yet, I have been able to live with the vertigo and the frightful squeals of thousands of birds and crickets that never cease to bother me, causing Meniere’s disease, which I have had since 1985 and that some days turns my world upside down and the ceiling is on the floor and vice versa. I’m dizzy and the floor seems far away as if my feet can’t reach it, I run into the door frame, sometimes I can’t drive, etc. However, the symptoms of Meniere’s disease and the embolism do to me what the wind did to Juarez: doesn’t even tousle my hair,” commented Guillermo Munro during an interview held while he was recovering from a stroke and a malignant tumor operation in 2010.

The life and work of Guillermo Munro (who is also bilingual) is quite extensive as he is not only a laureate writer, but also actor, theater director, graphic designer (from the old guard), artist, photographer, cultural promoter, journalist, chronicler, editor, and collector of old photographs and film antiques (he has filmed principally with 16 mm and Super 8 format); in addition, he has been active in politics since the end of the 1970s, being one of the first party members of the PAN here in Puerto Peñasco. He has five children who have honored his story and given him six grandchildren: Claudine, Alexandra, Eunice (all three married professionals residing in California), Guillermo “Memuco” (who presently lives in Beijing, having previously lived in Dubai, in both places working as a visual graphics editor for prestigious newspapers – currently with China Daily News), and Hector Hans (design artist who lives in Puerto Peñasco and works at the Visitors Center of the Pinacate Reserve).

Since 2010, Guillermo Munro Palacio, along with his wife Katy Colosio de Munro, have been living in Hermosillo; he works as the Director of Operations of the State Civic Auditorium while fulfilling all his obligations with the world of culture in Puerto Peñasco where he holds various positions of honor, which he operates at a distance and in person when required (CEDO, Pinacate Reserve, Cultural Council Consultant, to name a few). He also has his own editorial venture in De Cierto Mar Editores S. de R.L de C.V.

Guillermo Munro Palacio knows how to share his existence, display his anecdotes and transform them into interesting facts. In speaking with him about his infancy, of which he has had the deference to tell us exquisite stories full of nostalgia and innocence, it is impossible at this stage to separate the writer who narrates his childhood from the one being interviewed. We have had the privilege to observe the spirit of Guillermo Munro transport itself to the time of blue and red, of water and hunger, pathways and heroes, silence and stars, fishing and adventure; awaiting the rest with the hope of finding oneself in the waves of silence and the word.

Setting the table for Taste of Peñasco 2013