With Semana Santa around the corner, we are reminded of many local traditions that have taken place across Puerto Peñasco over the years. One of these, carnaval, in past years wouldn’t have been the same without the spectacular presence of Guille who, as Moka describes, has become synonymous in many ways with the colorful festivities. (Excerpts from original in Spanish)

There was no Carnaval this year, though there are still those who more or less anticipate its arrival with joy (just as there are those who don’t, of course). Yet, one individual who truly misses the festivities is Guille who has seen Peñasco celebrate such spirited and fantastic carnavals, which now draw sighs from memory.

I had arranged to meet with her one day, to which she charmingly agreed. I went to her salon to chat, and along the way made an appointment so she could cut my hair given it was a bit mistreated.

This was her moment, as in so many carnavals, shining proud amongst feathers, glitter, colors, and size 11 heels. Now she would have to do this through words.

“So, how long have you been here? I understand you are nearly a Rocky Point icon,” I began.

“Wow, can you believe that? You’re so mean,” she joked, “Well, I arrived here around nineteen seventy….five… It was Semana Santa, or a little before. The town was beautiful! You should’ve seen how beautiful Peñasco was…and I fell in love.  It was…let me clarify.”

“Why? It’s not anymore?” asking the obvious.

“Well yes, it’s different and it’s grown a lot, of course, but not like before. Now there are other things and it’s nice, but not like the peacefulness. Before it was virgin, and had its spirit…there were no hotels, all the beaches were ours, the people were simple. It was more romantic.”

“I went right into cutting hair as soon as I got here. I always knew I would,” she states confidently, “I came with a friend who was a stylist, also from Cd. Obregon. When he invited us to visit Puerto Peñasco, well some friends and I came to spend Semana Santa. He had a salon and invited me to work here, and I stayed… As soon as I got here I participated in Carnaval!”

“So you’ve been a princess since then?” 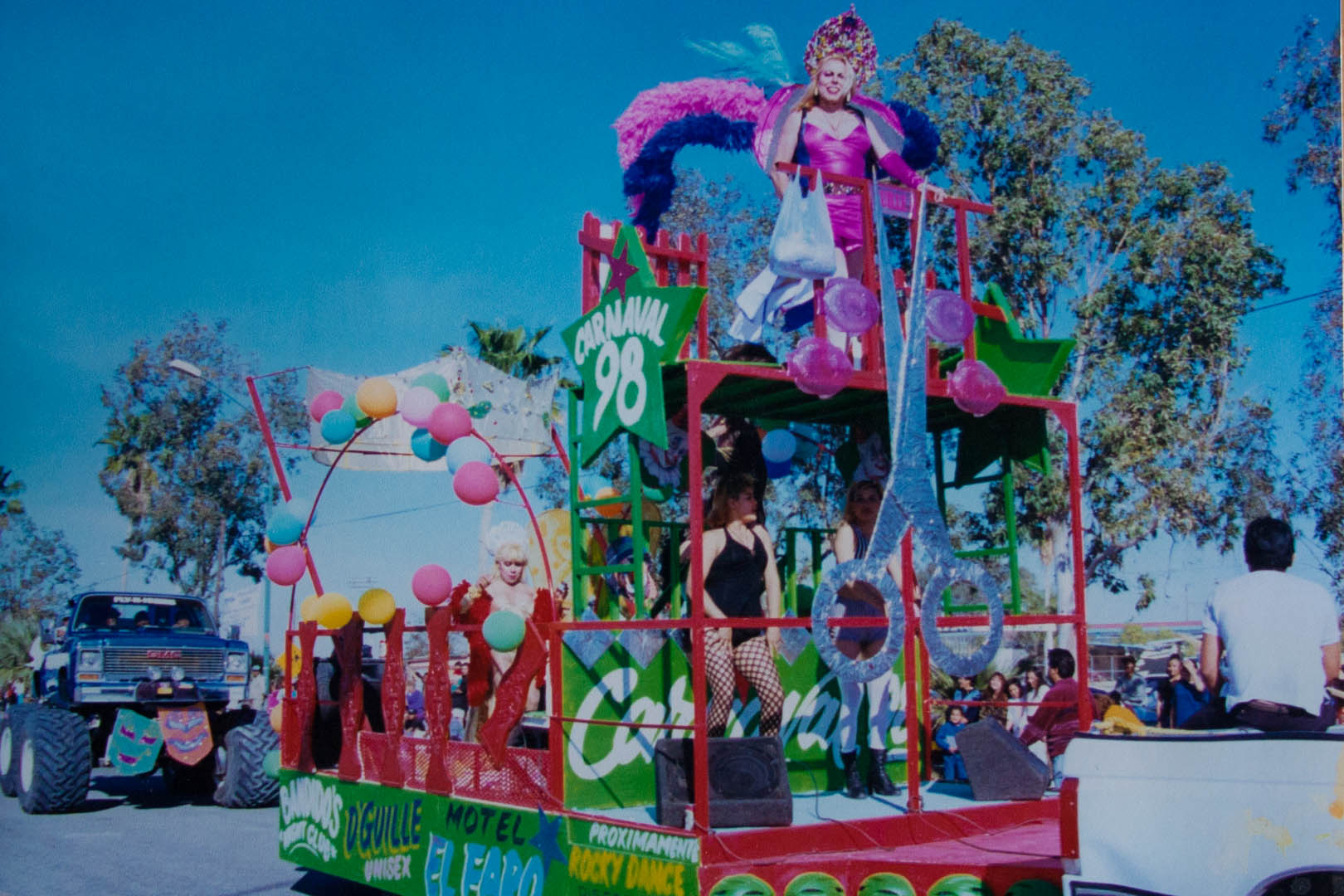 “Yes, go figure! Since then!” she bursts into laughter, “Because my friend, the one who invited me, said, ‘I have a white dress and I’m going to be queen… and I want you to be the princess.’ It was like he was from here; he hadn’t been here long but the people respected him… so I’ve been called “la princesa” since then because I’ve always said,” …she pauses, reformulates, and continues, “people ask ‘What year were you queen?’ You see… ‘were’ – past time. For example, my friend was queen in 1975 and that’s it. On the other hand I AM the Eternal Princess…and that way I continue to be part of the royal court.”

“Was that the first carnaval?” I asked, naively.

“No way!” she responded, surprised at the question, “That was MY first carnaval here as princess, but there had been carnavals for quite some time…they used to have splendid carnavals here, many years ago…and very well organized. I wasn’t here for the ones I’m talking about, but I’ve seen photos and people have told me about them. Carnavals began here in ninety-forty-something.  Did you hear that? Ninety-forties! Many people, who are older now, were Queens and all that. When I arrived it was already a tradition, and it was more organized.”

I was fascinated! Guille has a grand eloquence in talking about things; you should listen to her because the tone of her voice varies, lending emphasis, mystery, craftiness…something with which commas and periods simply can’t compete.  It’s like being with a storyteller that brings a character to life….

“Had you studied to become a stylist before coming to Peñasco, or did you learn here?”

“I learned purely through practice and by watching. I’m going to tell you how I entered into the art of cutting hair: doing my grandmother’s hair. That’s right, that’s how I started – brushing her hair, giving her braids, pony tails, stroking her hair – that’s where I began.   I worked in salons, cleaning, washing windows, watching what they were doing, asking them to show me. Don’t think they taught me how to work! No! They just taught me whatever I asked them, but I had to do my job first. Then, I began doing wigs, make-up, shampoo,…I did everything. When I specialized, it became easier, because I now know what hair is, what it requires and everything.”

“Moving on to something else, have you always been Guille?”

“Since they birthed me, my friend,” she laughs naughtily. “My name is Guillermo Salazar Gutierrez, at your service. I don’t have nicknames. Guille is from Guillermo. I am original and that’s it.  Obviously I’ve been called many other things and nicknames, but I…,” pointing to herself, “I have always been Guille. Well, sometimes my brothers call me Memo, which is normal. My name is Guillermo, and what do they call Guillermos…Memo!  If I’m dressed as a woman and you call me Guillermo or Memo, I’ll respond…I’m not going to be offended. I’m not going to cease to be who I am. Clothing does not make the man.”

“It’s not that it’s bad having different names, or ‘artistic names’,” she clarifies, “But I feel if you create another personality, and people know one or the other, it’s like you’re hiding and I don’t want that. I am Guille and I am who I am, despite everything.”

The knowledge emanating from this “humble person,” as she refers to herself, impressed me tremendously. She’s simple, without complications.

“I have had many obstacles, because indeed I have,” she continues while flattening down a few rebel strands of my hair, “But from the bad, the good has always come out and honestly I don’t regret anything. I’ve had many beautiful moments with myself, strong moments that redirected my path because they make me reflect…. And thanks to this sad, yet fabulous past, there exists an incredible today – where I am the Eternal Princess, where I’m known, where I have my own home, my own business, many friends, many interviews, and many stories to tell.  I still have clients who have been coming for thirty years, and there are new people.

If business is a little slow, I have friends who suddenly want to come and learn hairstyling tricks…I’m never bored. Life is beautiful and one must enjoy themselves!”

Dolce Vita comes to the neighborhood!