Along the pristine beaches just east of Puerto Peñasco, Encántame Towers is promising ocean views from breathtaking heights, from a record breaking 25th floor to be exact!  On October 10th, the development team of Miguel Guevara, of MG Developments, and Mary Snyder, along with Puerto Peñasco mayor Ernesto Kiko Munro and around 350 invited guests, masked up and gathered to mark the groundbreaking ceremony for the 2nd of three towers of the seaside complex. Encántame expects the first owners to take occupancy by Spring of 2021. 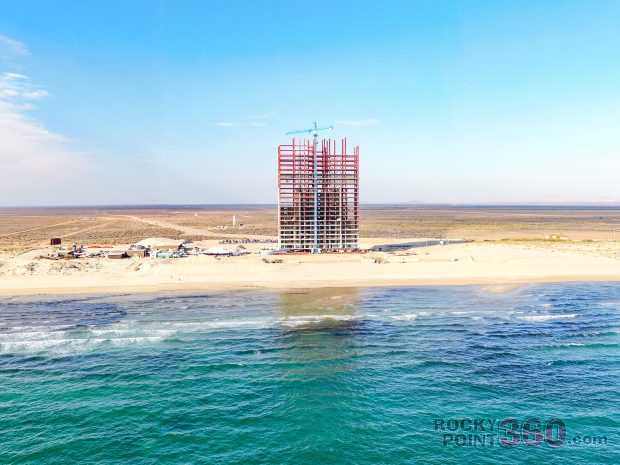 Following months of separation due to Covid, the beachside afternoon of good spirits, camaraderie, and anticipation was enlivened with the music of Roger Clyne. An Encántame flag-wielding skydiver also graciously landed on the west side of the tower just as Mayor Munro thanked everyone for their continued trust of investing in Puerto Peñasco.

Encántame Towers is already breaking records!  Preliminary construction on the project’s first building, Velero (sailboat) begun in July 2019, has already risen to heights never before seen in Puerto Peñasco, or Sonora for that matter. Once completed, Velero will be the tallest building in the state of Sonora at 25 stories, matched shortly thereafter by the 2nd tower, Verano (Summer), and then the 3rd, Viento (wind) at 24 stories each. While this weekend marked the official groundbreaking on the project’s 2nd building, underground work on Verano and Viento is already complete, including the remarkable task of laying 45 pilings for each tower.

As sales director Keith Allen explained, within the broader master plan of Encántame Resorts, Encántame Towers will be the 1st condo project to include a bowling alley, restaurant, sports courts, and driving range, along with proposed areas for future development of lots and convention center, easily accessible from the complex’s paved entry road.  Speaking of roads, it is particularly noteworthy that Encántame Towers is the first complex to adopt part of the highway leading from Puerto Peñasco toward Playa Encanto, and have already had crews out removing trash in an effort to improve the area’s overall image. 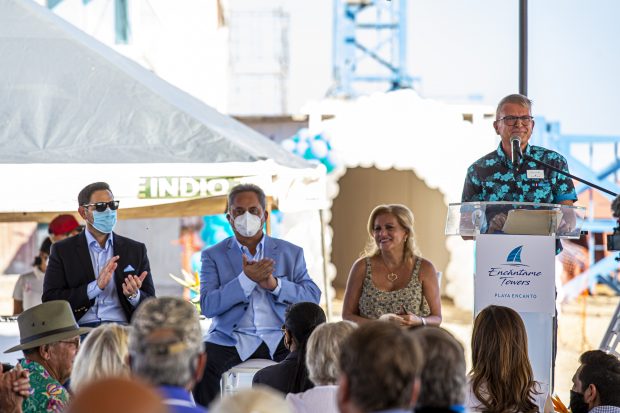 The development team of Mary Snyder and Miguel Guevara has certainly made its mark across Puerto Peñasco’s beaches, underscored by tireless efforts since 1995 of seeing through to successful completion five prior resorts including Puerta Privada, Sonoran Spa, Sonoran Sea, Princesa de Peñasco, and Condominios El Pinacate!

For more information on Encántame Towers, visit their Model located at the roundabout on Sandy Beach, open daily 9 am – 5 pm or online at:   encantametowers.com