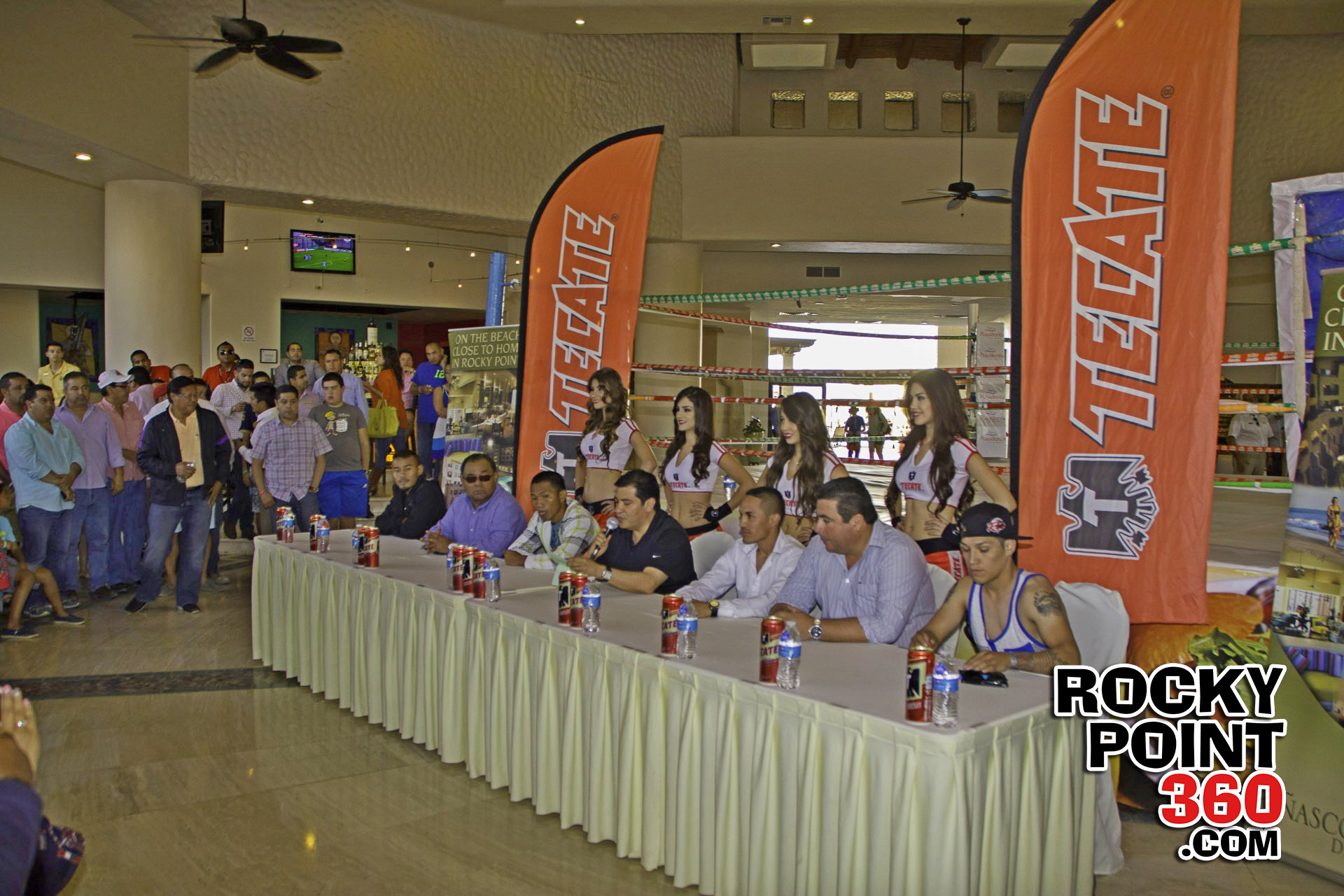 The press conference, including presentation of the stars for Saturday’s double flyweight boxing championship, was scheduled for 5:30 p.m. at Peñasco del Sol Hotel. A large boxing ring, serving as background, had been set up in the lobby of the hotel.

A few minutes before the arranged time, Juan Francisco “El Gallito” Estrada Romero arrived with his team, sporting a light pink shirt with brown pants, and dark sunglasses that he promptly took off upon dozens of fan requests, each seeking a souvenir photo.

I could see him through the window, calm and perhaps still shy, smiling and answering questions just outside the hotel. He even seemed a little thrown off when various people began asking questions at the same time. 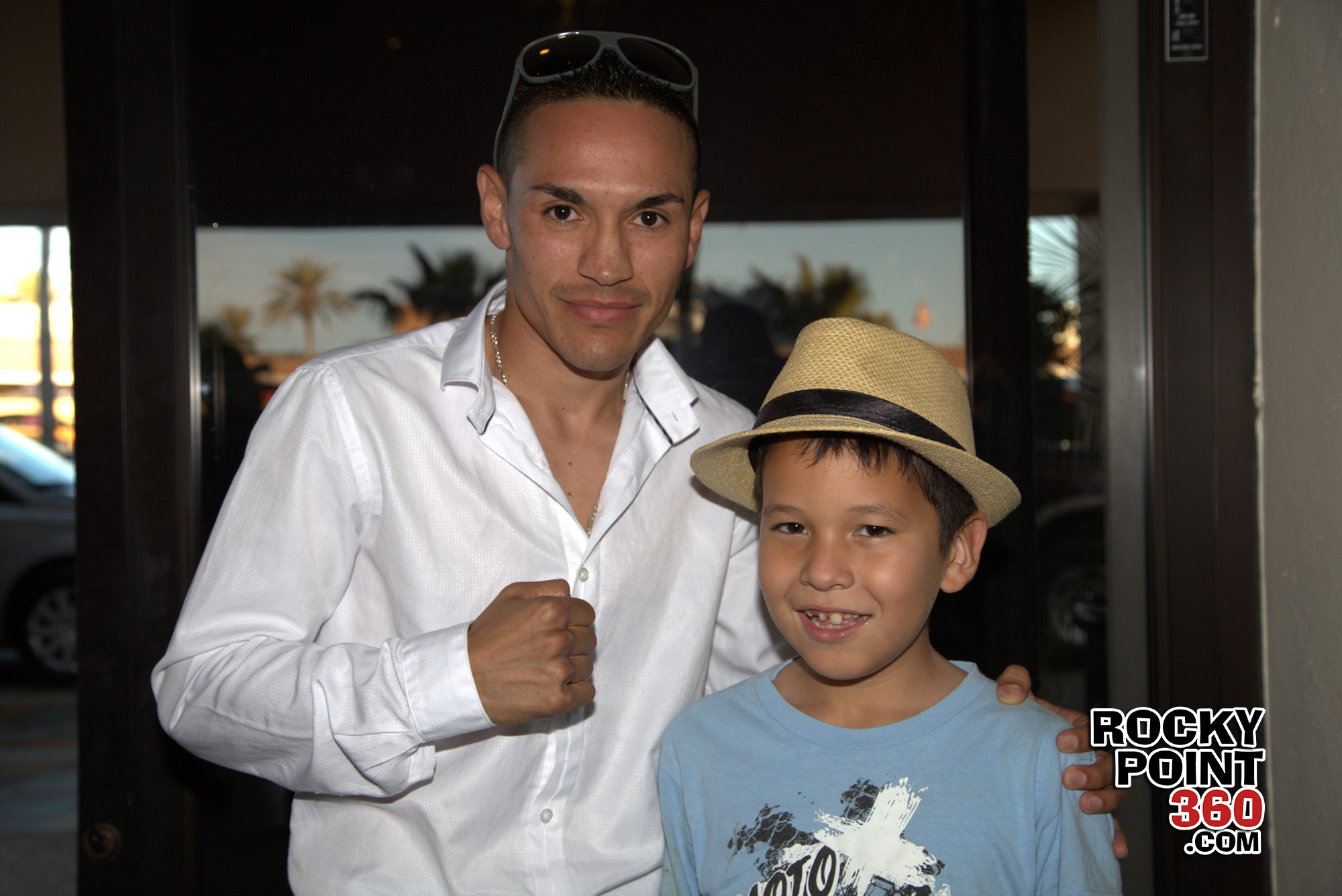 Ten, then twenty minutes passed. Four models from the sponsoring beer company found their places behind the table while photographers took advantage of the moment to capture the image. Another ten minutes passed, and then twenty, until all boxers and organizers arrived and took their spots in the respective chairs.

The boxers were given the opportunity to speak about their impressions of the upcoming fight, and about their stay in Puerto Peñasco. Mark Apolinario, who will be facing “Tyson” Marquez, spoke first stating he was ready to fight despite numerous hours of travel in getting to this port city. “The climate here is the same as where I’m from in the Philippines,” he added, “I’ve been training quite a bit and I’m ready for the fight.”

“Tyson” Marquez of Empalme, Sonora, briefly remarked that following two and a half months of training, he is ready to face his opponent, whose strength he acknowledges. “I’m going against a very tough rival. No one has been able to knock him out, and he’s only lost against bantamweight fighters.”

“El Gallito’s” opponent, Richie Mepranum, displayed his diplomacy in recognizing his rival as a worthy boxer while making assurances to put on a grand fight that would not disappoint. “I am prepared, I will fight with a grand champion, and will demonstrate that I am a worthy contender.”

Finally, hometown and host boxer Juan Francisco “El Gallito” Estrada gave thanks for the support of everyone from Puerto Peñasco, to whom he is dedicating this fight, and added he is happy to be home following four months of intense training to confront Mepranum, whose moves he has studied.

“Mepranum is tough, he’s not “soft” as many have said. But, I’ve come to win, though many things could happen. I don’t like to be a big talker, but I’m going to give it my all,” remarked El Gallito.

On behalf of the local administration, Héctor Acosta Félix expressed thanks this fight was taking place in Puerto Peñasco, even though Gallito’s earnings would not be as much if he had chosen to fight elsewhere.

Following the question and answer period, the star boxers (as there will be 10 fights in all), posed for photos with their fists facing their opponents’. The weigh in will take place on Friday, around noon at Las Palomas Beach & Golf Resort, and the fighters are ready to give their best this Saturday at the Convention Center.