On Feb. 29th at City Hall, as part of Citizens’ Wednesday activities, Mayor Alejandro Zepeda, accompanied by his wife Marcela Albelaiz, Gilberto Castillo from the City Office of Cultural Affairs, and Rosie Glover from the Organizing Committee of the recent Taste of Peñasco / Iron Chef event, presented both the local Fire Department and 2 Fish Ministries with checks representing proceeds from the “2012 Taste”.

During the presentation of the checks, additional acknowledgments were given to each of the chefs (and their sous chefs) who competed in the event: Ramón Ramos and Eleazar Lozano from “La Cocina de Ramón”, Juan Caballero and Ricardo Murrieta from “Mare Blue”, Marco Antonio Méndez and Giovanni Osuna of “Coyote Grill”, Julio Cauich and Jerónimo López from Mayan Palace, José Quiroz and Luís Alfredo Corrales who work at “Capone’s”, and of course the 2012 Iron Chef Winner Chef Mickey accompanied by his honorary sous chef Gaby Mata who is a culinary arts student at the Technological University of Puerto Peñasco (UTPP).

To help wrap-up our 2012 Taste of Peñasco/Iron Chef coverage, we’ve invited Rosie Glover to share some of the highlights from the experience as well as to detail the donations made to both of the selected beneficiary groups:

Reflections from the 2012 Taste of Peñasco & Iron Chef Competition

Well, it’s been almost a month since the big event and we’re still talking about it. Not just those of us who were involved, but everyone who was there is still commenting on the great success of the 2012 Taste of Peñasco and Iron Chef competition! As coordinator, I must say that those of you who volunteered to serve on the Taste of Peñasco/Iron Chef Organizing Committee give new meaning to the term “Dream Team”. Every single one of you deserves kudos for your tireless work and for the generosity with which you shared your time and talents.

Speaking of talents, our chefs have proven once more that Puerto Peñasco is rich in culinary expertise and creativity. They are all “Chefs de Acero” [literally translated as Chefs of Steel] and I highly encourage you, whether you reside here or whether you’re one of our visitors, to see for yourselves what all the fuss is about. Take a Food Tour of Peñasco, conduct your own taste test and familiarize yourself with the skills of our great chefs. 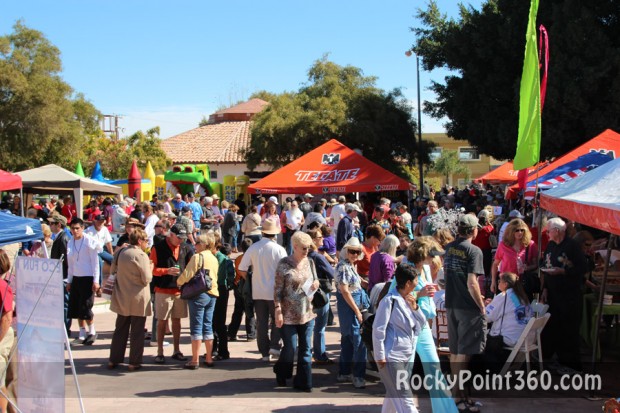 I’m truly happy that the event was so lucrative for our vendors. Almost everyone selling food sold out! The artists and artisans recorded great sales for the day. It was incredible. The ticket sales was brisk…all day long! The look on Mayor Alejandro Zepeda’s face when he saw so many people at the Plaza del Camaron said it all…”Wow!”

A debt of gratitude is owed to the performers who shared their talent with us, pianist German Esquer, Los Chinelos Dance Troupe, Steve McCarty [there promoting the upcoming March 17th Sta. Patricia’s Puerto Peñasco Rock Concert!], Riband and the Puerto Peñasco Youth Symphony Orchestra were all a great part of the festivities. Thanks as well to our judges for the Iron Chef competition. Three of the five came from out of town just to participate. Brian Landreville of Phoenix happily won a seat on the judges panel after buying 60 tickets! Chef Gustavo Gutierrez of Las Palomas had a wedding to cater and yet he took the time to be one of our judges…these are the details that made the experience so unique for me, and I’m sure for many others as well.

Probably the most rewarding aspect of the entire event is the knowledge that after all is said and done, we’ve managed to contribute to two deserving organizations in our community.

There’s no doubt that one of the noblest professions on earth is that of firefighter. To run towards disaster when others run from it takes bravery and determination. The men and women of the Puerto Penasco Fire Department reflect nobility and dedication in all that they do. The 2012 Taste of Penasco & Iron Chef Competition raised much-needed funds for our “traga humos”, or “smoke eaters”. The overall donation to the Fire Department from the event, which totaled $3,432 US, included a special donation of $700 from Dr. Doug Allen.

Two Fish Ministries, this year’s beneficiary charity, has in recent years done much to feed the hungry in our community. Serving more than 500 meals per day, five days a week at three locations. Two Fish also provides hot meals to school students as well as to inmates at the city jail. This great task is completed almost entirely by volunteers. The 2012 T.O.P/Iron Chef netted $57,000 pesos for the ongoing work of this organization!

I mentioned above the special donation by Dr. Allen to our firefighters. Well, you should know that in addition to being a child psychologist, retired from the Phoenix School District, Dr. Allen is a card-carrying chef. It’s no wonder then, that the good doc feels a kinship with our Iron Chef competitors. Prior to the big event, Dr. Allen presented each of the participating chefs with customized aprons and hats as mementos of their experience. He also had a banner made for the winning chef’s restaurant. Thank you, Dr. Doug, for bringing that special touch to the party!

On the evening of Feb. 29th, Fire Chief and Director of Public Safety in Puerto Peñasco, Ruben Salido Martinez invited Dr. Allen to be the special guest at a meeting at the fire station during which new t-shirts (bought with his donation) were to be handed out. Due to recent surgery, Dr. Doug could not attend and asked that I go in his place, which I was glad to do, along with fellow committee member Gilberto Castillo, Director of the Municipal Institute of Cultural Affairs, Fire Commander Ramon Lara, and Chief Salido Martinez. 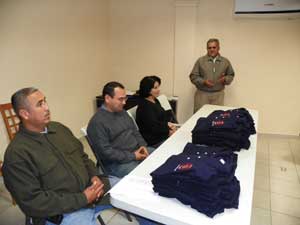 I’d like to take the opportunity to announce that the website www.tasteofpenasco.com will be changing frequently. Soon we’ll be offering sale items and hopefully putting some of the chef’s recipes up as well. As plans formulate for next year’s event, they’ll be posted. Thank you to all who participated and all who attended. See you next time!

10% discount on property taxes extended to 3/15