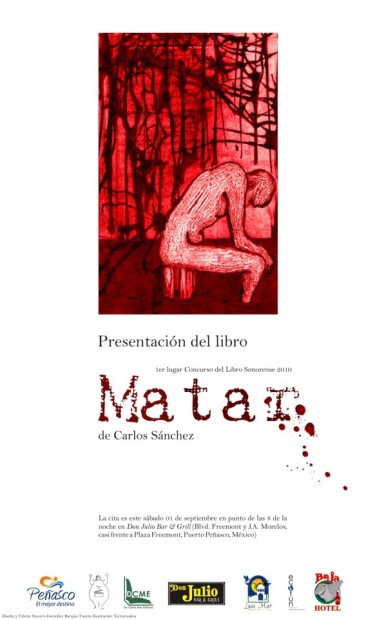 Carlos Sánchez, who has been in town leading a Creative Writing workshop organized by the City through the First Take Film Club (Cine Club Primera Toma), will be presenting his recent project Matar on Saturday, Sept. 1st, during a literary event to be held on the patio at Restaurant Don Julio beginning at 8 p.m. (Spanish). Participants from the Creative Workshop will also be on hand to receive certificates for their skill in creating and sharing stories, poems, tales, and experiences.

Sánchez is a self-taught writer; his literature arises from the marginal barrios of his hometown: Hermosillo

Journalist and writer, Sánchez has published books of stories, interviews, and short stories. He has won (on various occasions) the Sonoran Book Contest in two areas: short stories and tales.

Matar, his most recent book, contains testimonies of killers, and after presenting it at the International Book Fair in Guadalajara (FIL) as part of the International Journalists Gathering, writer Sergio González Rodríguez from the Reforma newspaper rated it as one of the best books published in 2011.

He is the founder of Ediciones La Cábula, a type of editorial practice born with the objective of publishing non-published authors, in 12 years has been to publish more than thirty titles in diverse genres.

Carlos Sánchez currently leads various literature workshops and photography; his strength is creative writing workshops, which he also offers in various prisons in the country. Recently he presented courses at the Oriente and Sur Prisons in Mexico City.

New in town: South of the Border Museum