Resounding teamwork of authorities from the three levels of government, non-governmental organizations, and volunteers helped with the rescue of a beached fin whale in the area of the Mirador on Wednesday morning, July 7th.

The beached whale was reported just after 6 a.m. on Wednesday morning, launching a titanic rescue project lasting nearly 5 hours, including the participation of approximately 100 people.  The first task was to keep the fin whale hydrated, followed by manual removal of various rocks to open a pathway, then as the tide rose it became possible for the mammal to float and community rescuers to guide it back to sea.

Once back in the water, the whale appeared disoriented and at first seemingly about to return towards the beach. However, participants in the rescue effort worked to prevent this and confirm the young whale’s return to sea.

Following the success of what is truly a historic event for Puerto Peñasco, biologist Humberto González Veliz of the Federal Maritime Land Zone (ZOFEMAT) in Puerto Peñasco expressed his delight on the completed goal, and thanked everyone who took part in the rescue.

He detailed it was a young fin whale about 10 months old, measuring at least 10 meters and weighing about 5 tons.  He added the entire rescue effort was done in adherence to protocols regarding beached marine mammals, making the whale’s return to sea possible.

Nélida Barajas Acosta, Executive Director of the Intercultural Center for the Study of Deserts and Oceans (CEDO) affirmed the organization was on scene to help in the rescue effort as soon as the beached whale was reported.

Barajas Acosta explained there is not a single answer, as there may be different causes that lead whales and dolphins to beach themselves, or wash up on shore.

“We have spring tides, which permitted return of the whale to sea,” explained the CEDO director, “through the participation of federal Navy authorities, PROFEPA (Environmental Protection), local civil protection, fire department, the municipal administration, ZOFEMAT, and CEDO. CEDO’s efforts were led by Abelardo Castillo, who specializes in wildlife at CEDO.” 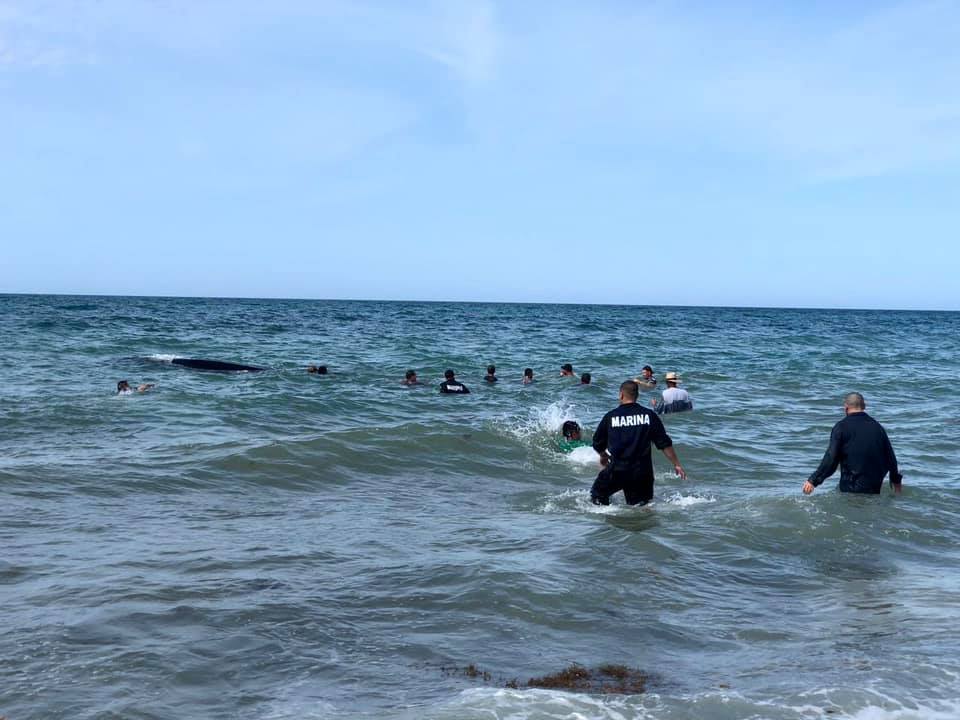