A prophet in his own land 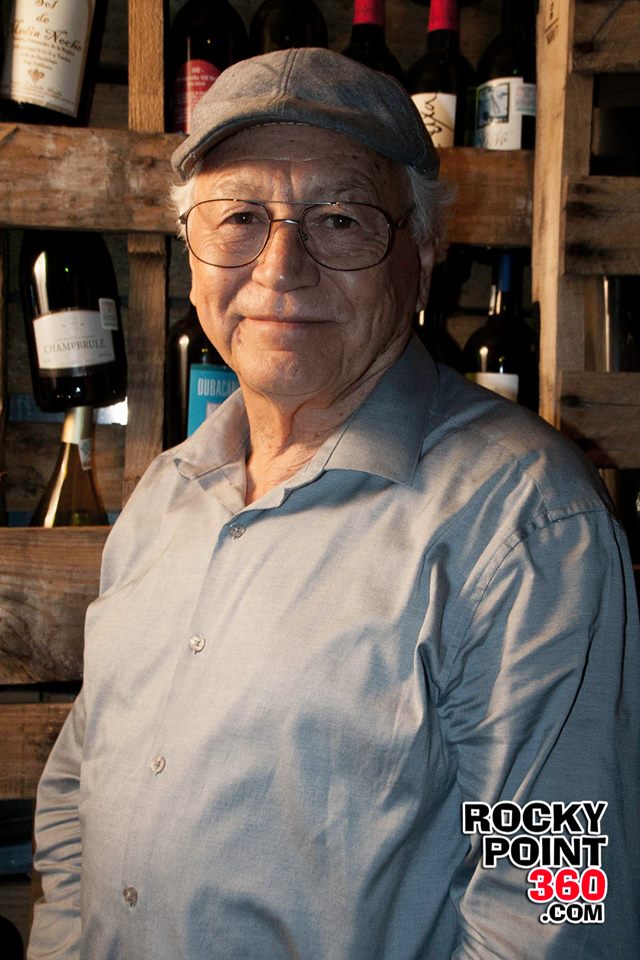 After a series of events across Mexico for his most recent novel “Hombres Valientes”, author Guillermo Munro Palacio presented his literary piece in his own land, Puerto Peñasco, before dozens of friends, family, and new readers. Breaking from the paradigm that no one is a prophet in their own land, “Don Memo”, as he is called by those nearest to him, brought his most recent work back to his port. The gathering was at El Tapeo Wine Bar on May 3rd, just one day after Munro Palacio had presented the novel in nearby Sonoyta. (Upcoming presentations at Mexican Consulate in Phoenix on May 22nd, and San Luis Rio Colorado on May 23rd).

As a reader and follower of Guillermo Munro’s work, I couldn’t wait and, after hearing an interview with him during the “National Hour” on Radio Sonora following his presentation in Mexico City, I asked him whether here in Peñasco he had considered people to do a dramatic reading during the presentation – while simultaneously offering myself just in case. He said “Yes, we’ll arrange it when I get back.” 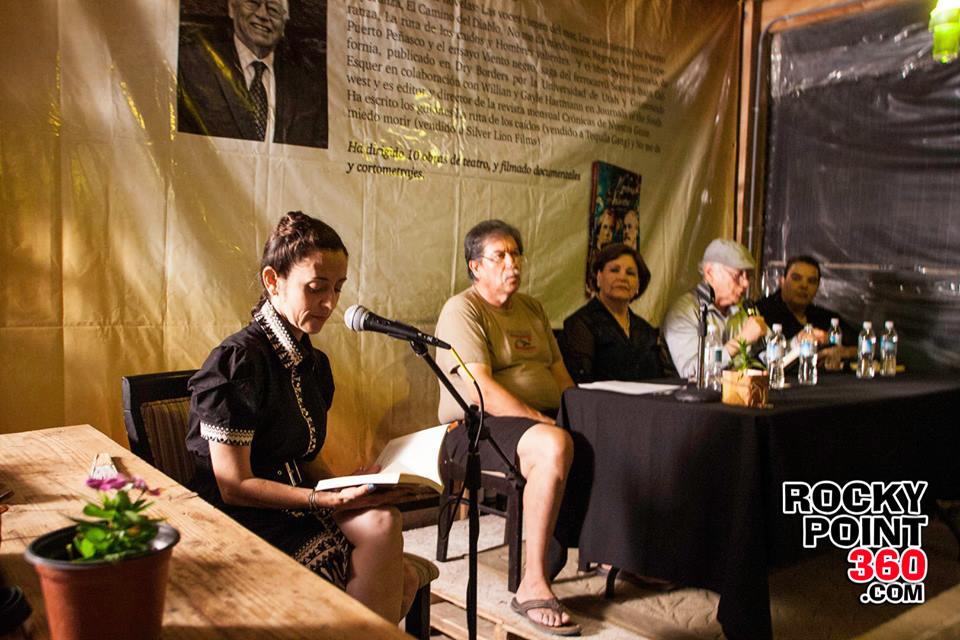 The book made its way into my hands and Don Memo suggested which pages I should read, with the goal of giving a voice to Filomena Ainza as she recounted her story to journalist Pierre Garnier. I read and read, imagining her just how Don Memo had described her. However, there were a number of dates and words in English I didn’t want to stumble over during the reading. Finally, I asked him if he would let me read another excerpt in which Filomena talks about the famous bandido Joaquín Murrieta; the text seemed more satisfying and exciting, plus there were a number of “bad words.”

The event itself was full of wonderful moments: the presentation of progress on Socorro González’s film about Don Memo “Los Murmullos de la Memoría” (Whisperings of Memory), the presentation by Don Memo’s close friend Roberto Escalante whose comments were spot on – much like what happens to us when reading yet is so difficult to translate into words, moderator and dear friend of the author, María Conchita Peralta, whose lively remarks and readings moved the night’s program along, and alongside Don Memo sat his endearing friend Nina Mier who, according to Munro Palacio’s own words, believes more in him than he does himself.  On his other side sat his inseparable wife Katy Colosio who, following surgery on her foot, has accompanied the author to as many of the recent book presentations as possible. 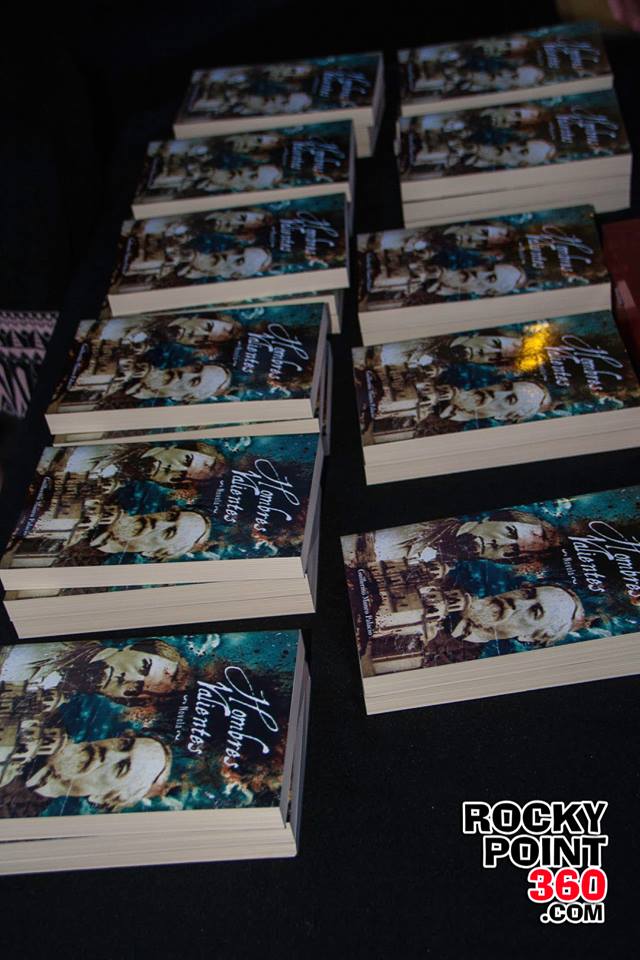 The presentation went on for more than an hour and a half. Those present waited until the end so they could go up and have their copies signed by the author, which in fact took another hour and a half amidst conversation and pictures.

Speaking about the book would be a bit dishonest as I have not yet finished it; however, in the words of Roberto Escalante, this novel is the most mature and riskiest yet by Guillermo Munro. In addition to telling the story of Sonora while pleasantly bringing voice and life to real characters in an entertaining fashion, who in turn talk about individuals who were pillars in the region’s history, the book also somewhat derisively delves into themes of the political system of that time, based on information gathered from documents researched by the author.

In this way, the phrase “no one is a prophet in their own land” is turned on its head because the writer Guillermo Munro always returns to his roots, offering the fruits of his work where he is always warmly welcomed and embraced. So much so, among his upcoming projects is a film based on one of his scripts “La Ruta de los Caídos” (The Path of the Fallen), purchased by the Tequila Gang film company and which is scheduled to be filmed in the Sonoran desert in 2015. 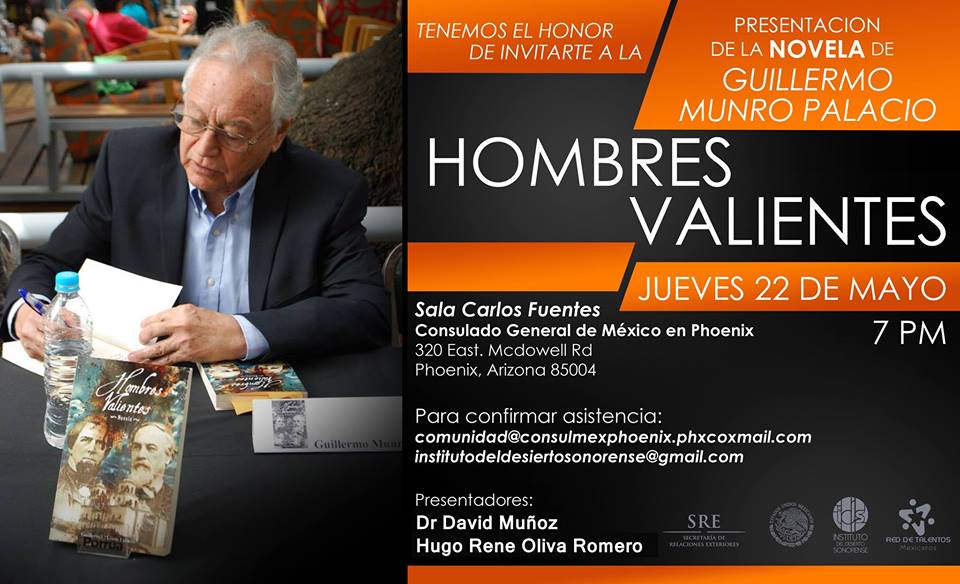 The next presentation of “Hombres Valientes” will take place north of the Border, in Phoenix, Arizona at 7 p.m. on May 22nd in the Carlos Fuentes Hall at the Mexican Consulate where the novel will be presented by Dr. David Muñoz and Hugo Oliva Romero.   Munro Palacio will then present his most recent novel at the First Book Festival in San Luis Río Colorado on May 23rd at 8 p.m. at the Plaza Puesta del Sol.

“Hombres Valientes” presents a historical look at events surrounding the incursion into Sonora and subsequent defeat of a group led by Henry Crabb in 1857.