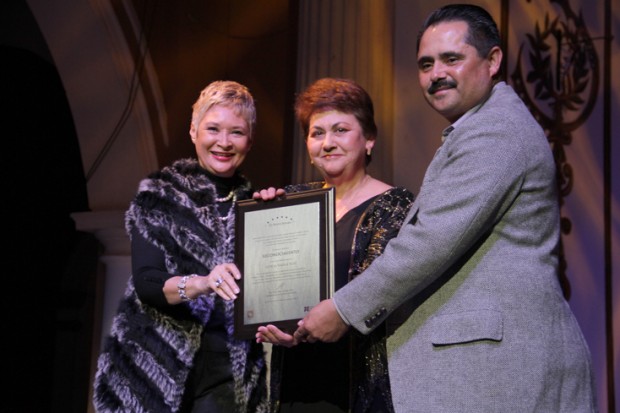 The traditional Alfonso Ortiz Tirado Festival (FAOT) in Alamos, Sonora, now in its 29th year, got underway on Friday, Jan. 25th and wrapped up on Feb. 2nd.  RockyPoint360 guest writer Carlos Sanchez was in Alamos for the entire festival, composing notes for the Cultural Institute of Sonora (ISC) – so we too got a glimpse of what went on in the colonial town tucked in the southern part of the State.   Last year, Puerto Peñasco’s own Armando Noriega was recognized at the FAOT as a Sonoran Master. This year, teacher and musicologist Leticia Varela received this honor as Sonoran Master 2013. FAOT 2013 was held from Jan. 25 – Feb. 2 and included the participation of 364 artists from Mexico, Cuba, the U.S., Spain, Italy, Germany, Russia, Chile, and Nicagarua.   (Excerpts in English, full stories in Spanish in Rocky Lounge under Soñar que Vemos).

The 29th edition of the Alfonso Ortiz Tirado Festival kicked off on the evening of January 25th at City Hall in Alamos, with an emotional ceremony recognizing Sonoran tenor Arturo Chacón-Cruz who received the Alonso Ortiz Tirado Medal.  … Filled with emotion, Arturo Chacon-Cruz expressed how this is important in recognizing him as being from Sonora: “God gave me the voice and my parents allowed me to study and progress. This recognition is for my family, my teachers, and the public of Sonora that has believed in and supported me.”

Following presentation of the Award, Arturo Chacón offered a concert with the accompaniment of the Sonora Philharmonic Orchestra, under the direction of Enrique Patrón Rueda.

Munro and Descartes a Kant, first session of rock in Alamos 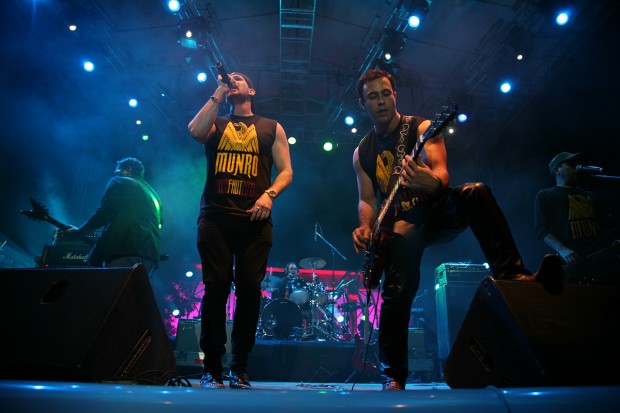 On Friday, January 25th, the first day of activities within the 29th edition of FAOT 2013, rock groups Munro and Descartes a Kant took to the stage at La Casa de las Delicias, offering their talent to hundreds of rock music lovers. … For Munro there are no musical borders, the most important thing is the “feeling.” He began his composing and music work in his hometown of Puerto Peñasco and to date has participated in important presentations in the southern part of the U.S. and in regional events such as the FAOT. …. After Munro opened the night, Descartes a Kant took the stage. Descartes a Kant is made up of three women and three men, but even more so by well-defined characters dedicated to musical theater. 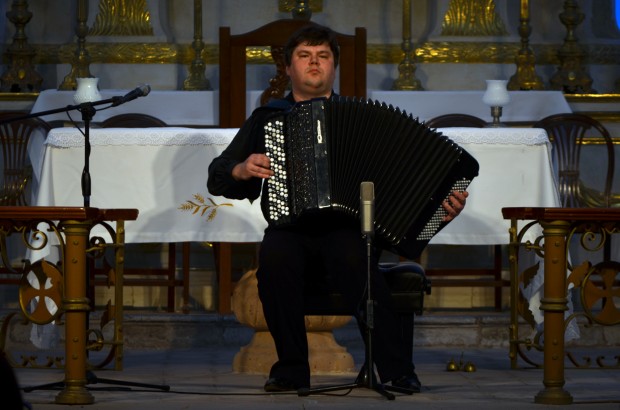 In knowing that Dr. Alfonso Ortiz Tirado was a singer, it is understandable the cultural festival that bears his name in Alamos is fundamentally dedicated to various presentations of vocal arts, particularly opera and similar genres. Still, it is worth noting that each year the Festival offers the public of Alamos – and its visitors – numerous musical demonstrations in other areas. …. On the second day of activities at the 2013 FAOT, in absence of a gala musical event at City Hall, one of the most remarkable musical offerings of the day was an accordion recital by Alexander Sevatian, originally from Belarus and residing in Canada since 2001…

Voices of the Northwest: Traditionalist Museum of Sonora

On the 2nd day of activities at the 2013 FAOT, the young Voices of the Northwest were present through Sinaloan soprano María Butchart and baritone Rafael Romero, both with degrees in Singing from the Superior Music School of Sinaloa. Tenor Christopher Roldán, who began his musical studies eleven years ago, joined the performance with Héctor Acosta, who graduated with a degree in piano from the University of Arizona. 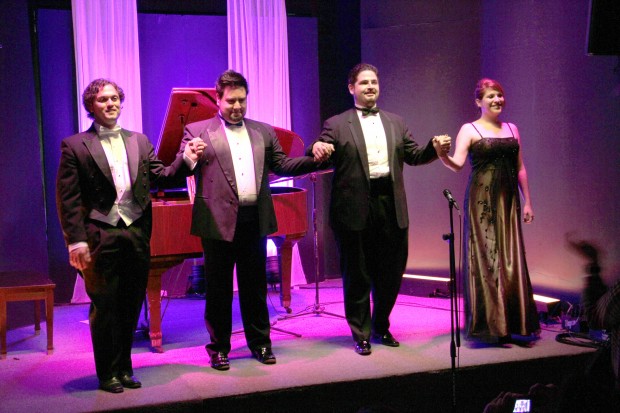 Alamos. Corridos to stimulate the desire of literature. Songs as an incentive to visit libraries. With accordion and guitar, cowboy dress and sombrero, the musicians of the group Libro Abierto (Open Book) told songs through corridos, and did parodies of tales.

In the purest Norteño style, Malik Peña on bass, Carlos Velenzuela on accordion, Ringo García on guitar, and Luis Fernando Peralta on vocals, enlivened the repertoire written by David “El Colas” Norzagaray Félix. …. as a counter proposal to traditional corridos that address harsh topics, the members of Libro Abierto were on La Alameda to present the intelligence included in travel through universal literature: Don Quijote de la Mancha, Metamorphosis, Dracula, Pinnochio, among others that are here to stay.

A minstrel appears in the Plaza de Armas 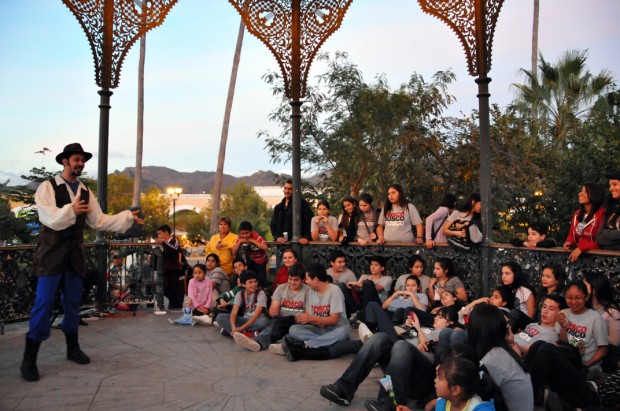 Alamos. In the middle of the Plaza de Armas, atop the kiosko, characters and legends captivate the attention of children, youth, and adults. A man in a sombrero passes by and upon hearing the voice of the minstrel his steps cease. A woman puts down the bucket she’s carrying, fixing her gaze inside the kiosko, her ears eager to catch the story.  The story…the stories…come from the voice of Julio Patricio Cárdenas, a professional actor passionate about his role as minstrel…  ….later on, seated at a restaurant table, the story teller no longer wears a mask; Julio Patricio Cárdenas tells of the beginning of his career, returning to his childhood years when his maternal grandmother would tell him and his sister the stories that, oh blessed memory, he now tells the children that allow him to once again be a kid himself.

Unrepeatable Instant. Alamos. It’s a landscape. Many landscapes. Nature from the eye of photographer Mario Sánchez Luna. Once again, housed in the traditional Polos Restaurant, Sánchez Luna comes to share regions that are swiftly and constantly captured in this fundamental exercise of his life. Because without photos, says Mario, life would not be the same.

Via his exhibition, Sonoran Chromatic, Sánchez Luna provides the best framework for the Art Route corridor in which he has participated fifteen times. …when asked “Which is your best photo?” He responds:  I have yet to take it, but I see a photograph that I took an hour ago and say: this is the best, and this did not come out well, I didn’t like this, and I can’t do it again; I don’t repeat them, I can take it vertical, horizontal, but it is completely different. Photography has given me satisfaction, above all to capture the landscapes, the moment that will never again repeat itself.

It is tradition for the Alfonso Ortiz Tirado Festival to invite the participation of young singers, giving them the opportunity to present themselves on stage which is where artists are formed. On this occasion, a group of young professional singers delighted the public with a complete operatic concert.

The students were accompanied by the Sonnora Philharmonic Orchestra and directed by the experienced maestro Enrique Patrón de Rueda, a specialist in opera and therefore knowledgeable of a singer’s needs, such as the importance of having adequate time for each breath. …

Performers included baritone Germán Olvera, tenor Omar Contreras, mezzosoprano Cassandra Zoé, soprano Rebeca de Rueda, soprano Penélope Luna and tenor Andrés Carrillo. Despite their youth, these artists already have the theatrical security that allows them to transmit the essence of each of the characters they interpret to the public. It was a night in which the public in attendance departed full of satisfaction and emotion.

On Tuesday evening (Jan. 29th), there was a wonderful surprise at the City Hall in Alamos; attendance had grown from the previous night, for a vocal recital that on paper may have appeared less attractive. The program took place under the title of Noche de la Universidad de Sonora and was led by three young sopranos: Valeria Quijada, Cesia Olivares, and Nadia Lamadrid, each music students of UNISON – one graduate and the other two still in school. 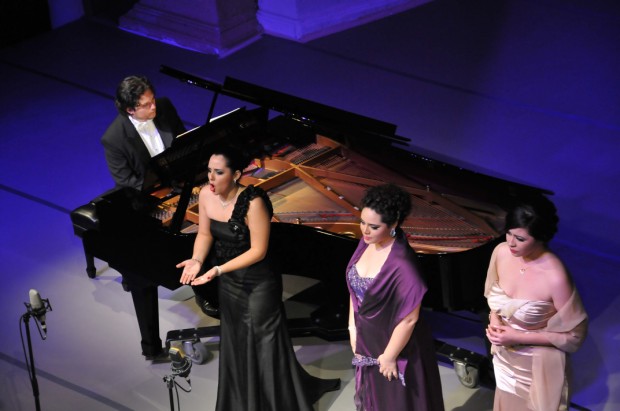 The fact more music lovers attended this recital than the splendid presentation of Russian mezzosoprano Irina Nikolskaya seems to say the Sonoran community is alert and aware to the preparation and work of its young artists, which is undoubtedly something to applaud. …. Congratulations are in order as the FAOT dedicates sufficient space and time to put young voices in contact with the public, and also because the public has drawn near to these voices with interest. There is no better experience for singers at this point in their career than to be on stage and face an audience that is especially attune to vocal music.