Other than watching highlights from the red carpet from time to time, I have never been a die-hard Awards season fan. Yet, the notion of receiving a nod of recognition and support from one’s peers in whatever field you may be is…I have to admit…kind of nice. When you add artists, two great hosts, musicians, a renowned author, an “Eternal Princess”, and a little salsa into the mix, it’s also the recipe for a fun night.

This brings us to the recent celebration of the 2nd edition of what has come to be known as “The Eddies”, or rather recognition for artistic and cultural contributions to the community of Puerto Peñasco over the past year.  The Eddies, initially called “The Fiesta Awards,” was an idea first launched in 2013 by Eddie Wharez Diseños Casa y Jardín as a way to help mark the 10th anniversary of his shop here in town. Just a year earlier, Wharez had held a logo contest, challenging various designers and artists to come up with a new look for the business. Yet, the evening is extending its reach beyond business promotion and becoming simply a great way to start off the year while recognizing the cultural and artistic contributions of so many across the community. This year, the Awards were dedicated to late musician Valdemar Arrieta and included musical performances by Joshua Ellis, Veronica Franco, Gleen Rivera, Grupo Juvenil Safari, saxophonist Richard Scott, Agua de Coco, and poetry by Gastón Rochin.

On Saturday, Jan. 18th, more than 200 people showed up on the red carpet outside Terramar to see who would take home an “Eddie”. The figurines themselves, depicting a woman on one side and a man on the other, are wooden carvings designed by Eddie Wharez and this year were carved by Ramón Urquídez, an inmate at the local CERESO. Recognizing that artistic talent may be found anywhere, this is the second time the awards were carved by someone at the CERESO.

In 2013, The Fiesta Awards – “The Eddies” – offered two categories for overall artistic recognition: a Lifetime Achievement award (given to internationally renowned musician and composer Armando “Kennedy” Noriega), and an “Open” category (given to international artist Guillermo “Memuco” Munro Colosio). In addition, Wharez chose to hand out a special award that year (for Nina Mier, writer – cultural promoter – and director of Cine Club Primera Toma, A.C.) for contributions in strengthening the diffusion of cultural activities in town. In its first year, 18 artists from different backgrounds were nominated to the Open Category and 4 as Lifetime Achievement prospects.

This year, additional categories were included and nominations rolled in continuously from Jan. 2 – 15….though the names of more artists, cultural promoters, visiting artists, musicians, and more could have easily been thrown into the mix (hint – be sure to nominate your favorite artists for next year)! By the time nominations closed, just three days before the event thereby leaving the five judges with one long evening to deliberate, there were 69 nominations in all!

With so much artistic talent developing within Puerto Peñasco, as well as that bursting out onto national and international scenes that touches our community in some way, we are pleased to highlight the winners of this year’s “Eddies”:

Fan Favorite: Painter Gabriela Solis Palofax – Selected from all nominees through “Likes” on Facebook. (Gabriela and her husband have a gallery and frame shop near the entrance to the Old Port – about a block behind Mercedes’ Rusticos)

Best Visiting Artist: Roger Clyne & the Peacemakers (For contributions to the community in spurring tourism every year via packed concerts, as well as giving back through charitable efforts.)

Cultural Promoter: Shandra Keesecker (Yes!!! That’s me!!) Very exciting and unexpected (I was told two of the judges abstained from voting…being family and all)! GRACIAS!

Honorable mentions for the evening were given to rock singer Alan Munro, international model Reyna Leyva, and to Guille Salazar the “Eternal Princess” of Puerto Peñasco who has graced many a Carnaval festivity over the past 30 years.

Before the evening wrapped up, Eddie took the stage one last time to present a special award, one that came as a tremendous surprise for both the judges and audience members (trust me, recipients had to be called in from outside or from on their way to the bathroom). In recalling these awards initially came about to recognize the work of artists who 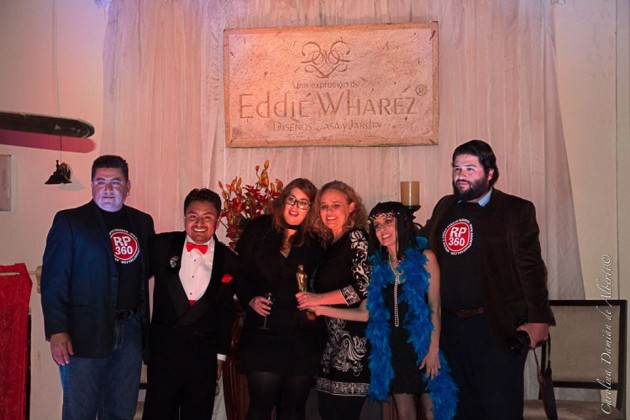 through their work have helped the name of Puerto Peñasco transcend whether regionally, nationally, or internationally, he spoke about a team of talented individuals who have offered a “window to the world” and always strive to present the best parts of our port, “a window filled with cultural activities, and positive news about what goes on in Puerto Peñasco.”  Believe it or not, he called the whole team of Rocky Point 360 to the stage! GRACIAS! GRACIAS! GRACIAS!

It was quite an evening!

Congratulations to all nominees, and the community of artists in which we live, for a very special night! Thanks again, Eddie, for helping us recognize the artists that surround us! 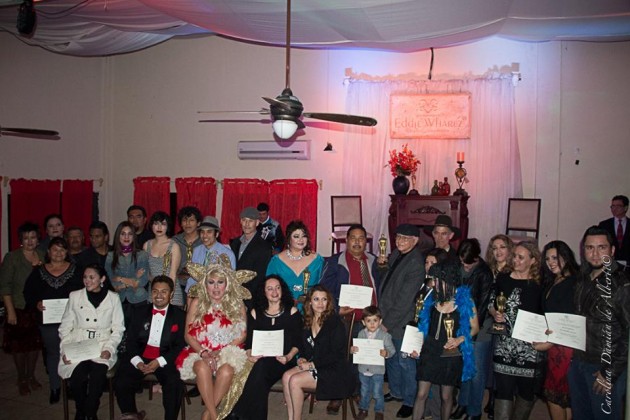 Youth (individual or group under 25)