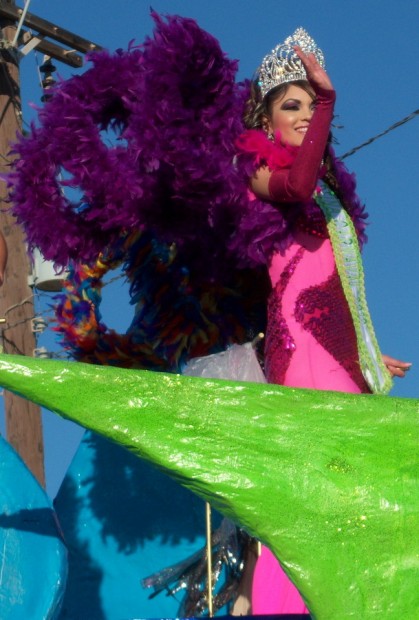 The Puerto Peñasco 2012 Vive la Fiesta! Carnaval activities got off to a great start on Friday, Feb. 17th, with the parading of Carnaval Royalty candidates through the city. The Royalty candidates, including those up for Carnaval Queen and “Rey Feo” (the Ugly King) sat atop their chariots…or rather, trucks….and began their procession at the Baseball Stadium (No Reeleccion  and Blvd. Juarez) before winding their way down Blvd. Juarez and then back up Calle 13. Later that evening, at the Carnaval grounds set up near Peñasco del Sol hotel (at the end of Calle 13), Bianca Viridiana Guzmán Gutiérrez was crowned 2012 Carnaval Queen while Dalia Magdala Beltrán was named Carnaval Princess and Swamy Thalía Lizárraga Noriega the Carnaval Duchess. José Alberto Zúñiga Gutiérrez was crowned 2012 Rey Feo. As announced earlier, Danna Moraga Sotelo and Héctor Fernando Acosta Castro were crowned the Children’s Royalty for the 2012 Carnaval. 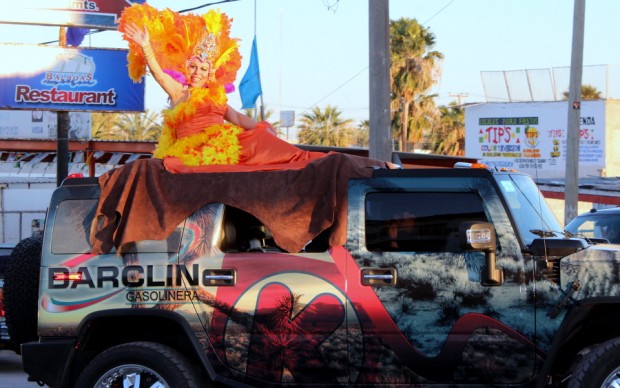 Among the pageantry of the Candidate Parade earlier that day, people lining the road admired the sparkle of “Guille – the city’s Eternal Princess” astride the Barclin chariot, as well as numerous Princesses and Queens from across Puerto Peñasco including Miss Peñasco 2011 and royalty from last year’s “Marine Fair”. All candidates, carnaval royalty, and their courts rode down the parade route once more on Saturday, Feb. 18th, during the first of 3 Carnaval Float Parades.

If you didn’t catch the first colorful parade on Saturday, there is one today (Sunday, the 19th) at 3 p.m. (starting at the baseball stadium and making its way down to City Hall) and again on Tuesday, the 21st (again at 3 p.m.)  Be sure to check back later in the week for our Carnaval Photo Gallery!!!